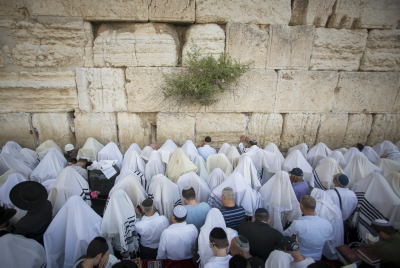 Tens of thousands attended the traditional Birkas Kohanim at the Kosel on Monday, the second day of Chol Hamoed in Israel, the first day of Chol Hamoed for those overseas. B’chasdei Shamayim, no security incidents were reported. Over 1,000 policemen were spread out throughout the Old City, with hundreds in the Jewish Quarter and the area leading up to the Kosel.

Meanwhile, the rest of the country was quiet from a security point of view as well. On Monday, repeating the pattern that established itself Sunday, dozens of national parks and camping areas were closed off by police due to overcapacity, as hundreds of thousands of Israelis hit the trails and paths of the country. The greatest pressure was in northern Israel, especially in the area of the Kineret, where traffic jams and crowded beaches kept thousands from getting to their destinations.

The weather was very amenable to outdoor activities, with temperatures in the low to mid 80s in most parts of the country. Forecasters said that Tuesday, however, would be a different story; a major heat wave was expected, and temperatures would hover in the mid-90s and higher. Things are set to cool off Wednesday, and pleasant temperatures are expected for Shevi’i shel Pesach and the Shabbos that follows it, forecasters said.