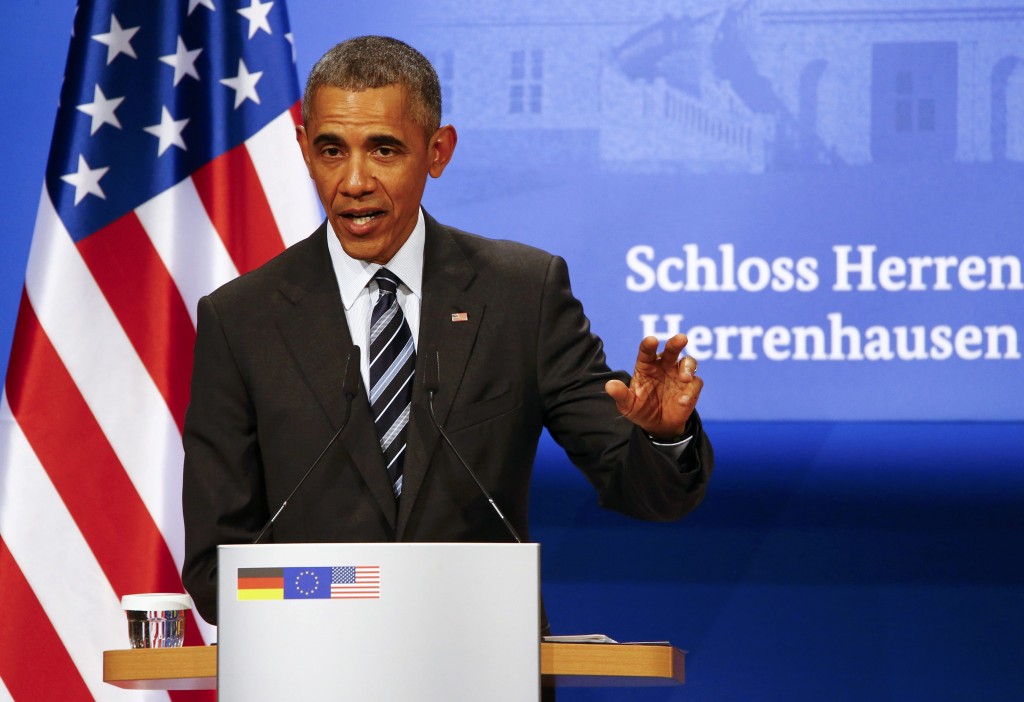 President Barack Obama said during a visit to Germany on Sunday that he was “deeply concerned” about a surge in violence in Syria, where government forces have stepped up bombing of rebel-held areas around the strategic city of Aleppo.

Speaking after talks with German Chancellor Angela Merkel at a 17th century palace near the northern city of Hanover, Obama spoke of a “tragic humanitarian crisis” in Syria and said he continued to believe in a political solution to the fighting there.

Germany is the last stop on a six-day foreign tour where Obama has sought to shore up U.S. alliances he views as important to increase trade, defeat Islamic State terrorists and counter Russian intervention in both Syria and Ukraine.

“We remain deeply concerned about the upsurge in fighting in Syria over the last several days, and we continue to agree that the only real durable solution is a political solution that moves Syria towards an inclusive government that represents all Syrians,” Obama said.

Merkel urged parties to peace talks in Geneva, which are at risk of collapse, to agree humanitarian zones where fleeing Syrians could feel free from bombardment. She and Obama made clear that they did not favor the creation of classical “safe zones” which would need to be protected by foreign forces.

The two leaders, who have developed a strong, pragmatic relationship after a rocky start in which Merkel refused to allow Obama, then a senator campaigning for the presidency, to speak at the Brandenburg Gate in 2008, touched on a range of issues, including Ukraine, North Korea, Libya and free trade talks.

Obama praised Merkel for her “steady leadership” and handling of Europe’s refugee crisis, saying her decision last year to welcome hundreds of thousands of migrants to Germany had put her “on the right side of history.”

Both leaders expressed concerns about violations of a ceasefire in eastern Ukraine and said sanctions against Russia, imposed by the West in response to Moscow’s intervention there, could not be eased before the situation on the ground improved.

Obama was also asked about North Korea’s latest demonstration of military might – a submarine-launched ballistic missile test that Pyongyang described on Sunday as a “great success.” A series of tests in recent months have increased tension on the Korean peninsula, angering ally China and triggering new United Nations sanctions.

“What is clear is that North Korea continues to engage in continuous provocative behavior, that they have been actively pursuing a nuclear program, an ability to launch nuclear weapons,”Obama said.

“And although more often than not they fail in many of these tests, they gain knowledge each time they engage in these tests,” he added.

Ties between Washington and Berlin were damaged in 2013 by revelations of widespread surveillance of German citizens, including the bugging of Merkel’s mobile phone, by the National Security Agency.

But in recent years, the two Cold War allies have patched things up, coordinating closely on the Ukraine crisis and pushing for agreement on a free-trade deal between the United States and European Union before Obama leaves office on Jan. 20.

Negotiations on the Transatlantic Trade and Investment Partnership (TTIP) have been difficult and time is running out.

Thousands of protesters holding placards with slogans like “Stop TTIP” marched on Saturday to express their opposition to the deal. Europeans and Americans alike fear it could cost jobs and erode consumer protections.

But Obama said he hoped the deal, which supporters say could boost economies on each side of the Atlantic by $100 billion, would be agreed this year.

“Time is not on our side,” he said as he and Merkel opened the Hanover Messe, a massive industrial trade fair. “If we don’t complete negotiations this year, then upcoming political transitions in the United States and Europe would mean this agreement won’t be finished for quite some time.”

Now in the last nine months of his presidential term, Obama came to Germany after spending three days in London where he urged Britons to vote to stay in the European Union in a June referendum, whose result could have global economic consequences.

Earlier in the week, he met with Gulf leaders in Riyadh to try to allay fears that Washington had become less committed to their security, especially after the nuclear deal with Iran, the regional rival of Saudi Arabia.

Before Obama returns to Washington late on Monday, he and Merkel will hold talks with British Prime Minister David Cameron, French President Francois Hollande, and Italian Prime Minister Matteo Renzi. Among the issues they are expected to discuss will be closer intelligence sharing following Islamist terror attacks in France and Belgium.

“Everyone said things would slow down,” Obama quipped about his final year in office. “It hasn’t happened.”