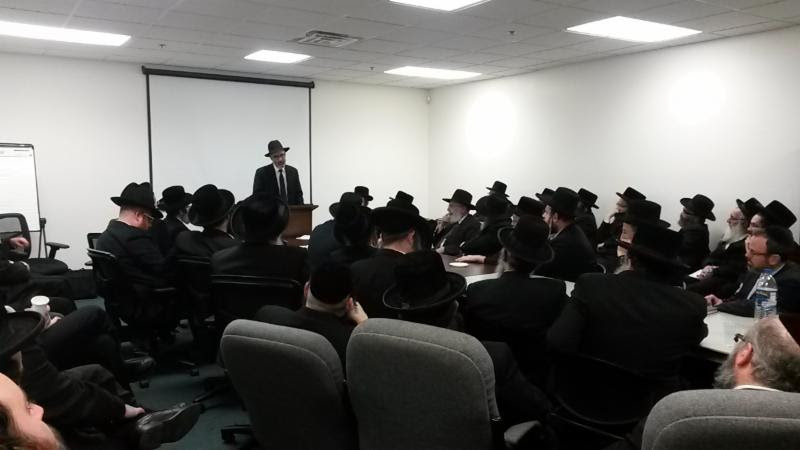 Agudath Israel of America released the following statement on April 21, 2016, regarding the safety of yeshivah buildings in Ramapo:

Following an Order issued by the New York State Department of State on April 18, 2016, requiring the Town of Ramapo to take certain steps to enforce the State’s Uniform Fire Prevention and Building Code, including a series of inspections of nonpublic school buildings, a group of some 40 yeshiva leaders have pledged their “full cooperation” with Town officials in carrying out the terms of the Order.

The yeshiva leaders, representing Jewish schools from across the Town of Ramapo, met on April 20 in the offices of the Yeshiva Association of Rockland County. Town of Ramapo officials reported to the group about the April 18 Order, and discussed with them the Town’s plans to conduct a series of fire safety inspections in a number of yeshivos in the weeks ahead.

After the Town officials left, Rabbi Chaim Dovid Zwiebel, executive vice president of Agudath Israel of America, addressed the yeshiva leaders. The discussion focused on the importance of working together with the Town to ensure that school facilities are fully compliant with applicable safety standards.

“It was heartening to hear these yeshiva leaders, who are under tremendous pressure in so many different ways, commit themselves fully and unambiguously to the safety and wellbeing of their students and staff,” said Rabbi Zwiebel. “What emerged from their meeting was a strong and impressive resolve to fully comply with all applicable safety laws.”

The yeshiva leaders made that resolve tangible, by signing a statement declaring their commitment to cooperate with the Town of Ramapo as the Town carries out its responsibilities under the April 18 Order. The text of the yeshiva leaders’ statement follows:

Concerns have recently been raised about the safety of certain nonpublic school buildings in the Town of Ramapo. Of particular note is the Order issued on April 18, 2016, by the New York State Department of State, ordering the Town of Ramapo to take certain immediate steps to address these concerns. We, the undersigned leaders of Jewish schools throughout the Town of Ramapo, pledge our full cooperation with the Town in carrying out the terms of the April 18 Order. We believe that the large majority of our institutions are in fact safe, and in full compliance with applicable fire and safety standards. However, to the extent that there are any deficiencies in this regard, we will take all necessary steps to work with the Town to address those deficiencies. The physical safety of our precious students and staff are of paramount importance to us, and must never be compromised in any way.