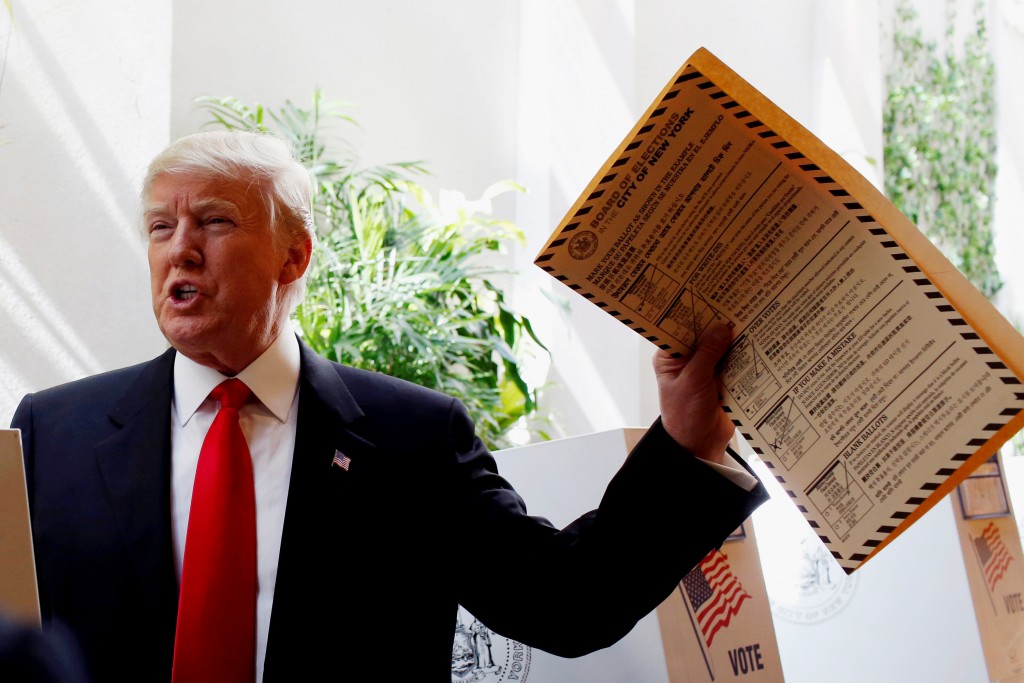 Donald Trump easily trounced his opponents in Tuesday’s Republican presidential primary here in his home state of New York, notching his biggest win yet and pulling further ahead of Ted Cruz and John Kasich in the delegate count.

Trump’s blowout victory – which was propelled by voters’ overwhelming desire to elect a political outsider who could bring change – positions the billionaire mogul for a hot streak in five East Coast primaries next week and brings him closer to securing the nomination with an outright majority of pledged delegates.

Late returns showed Trump winning with well over 50 percent of the vote statewide. He was holding similar margins in most of the state’s 27 congressional districts, putting him on the path to winning most or even all of New York’s 95 delegates.

The victory comes at a critical time for Trump, who is trying to mature as a candidate, professionalize his campaign team and reassert his dominance in the prolonged nominating contest after a troublesome month in which Cruz and Kasich have taken surgical steps to force a contested convention.

Stepping out with his family to the brassy strains of Frank Sinatra’s “New York, New York,” Trump sounded like a more disciplined candidate as he claimed victory in a short statement at his Midtown Manhattan skyscraper, Trump Tower.

Gone were Trump’s signature personal insults; he referred to “Senator Cruz,” not “Lyin’ Ted.” Instead, he focused on the economic angst that has helped fuel his candidacy and that his advisers think could be a potent general election theme.

“Our jobs are being sucked out of our states, they’re being taken out of our country, and we’re not going to let it happen anymore. We’re going to stop it,” Trump said, singling out some of the business titans who were mingling with him in the building’s pink-marbled lobby.

Boasting about the size of his win in New York, Trump added, “We don’t have much of a race anymore, based on what I see on in the media. Senator Cruz is just about mathematically eliminated. . . . We’re really, really rocking.”

Trump’s win in the state has long been anticipated. He enjoys celebrity status as a real-estate developer and thrives in New York’s media culture; the tabloid newspapers have chronicled his exploits for decades.

Trump’s tell-it-like-it-is persona resonates with many New Yorkers, particularly the disaffected blue-collar whites he courted at his campaign rallies, which helped drive up his win margins in places like Staten Island and Buffalo. And unlike in most other states, Trump cultivated a web of political allies at the local level here well before entering the presidential race last June.

Despite a recent winning streak in the Wisconsin primary and several state conventions, Cruz found no momentum in New York and struggled to find much support at all. The Texas senator’s attack against Trump in Iowa for having “New York values” boomeranged on him here.

Cruz tried to court voters in more Republican areas upstate as well as in Democratic strongholds like New York City, where he met with black ministers in the Bronx and wooed Hasidic Jews at a matzah bakery in Brooklyn.

Still, early returns showed Cruz in a distant third, behind Kasich. Cruz held no election night party and instead sought to turn the page. Campaigning in Philadelphia, he declared that “America is at a point of choosing.”

“Join me on this journey of less talk and more action because I know you may have been knocked down, but America has always been best when she is lying down with her back on the mat and the crowd has given the final count,” Cruz said. “It is time for us to get up, shake it off and be who we were destined to be.”

Kasich tried to appeal to the state’s more moderate voters by noting he is the only Republican who polls show would defeat the Democratic candidates – former secretary of state Hillary Clinton and Sen. Bernie Sanders (Vermont) – and arguing that he alone has the experience to create a governing consensus in Washington.

This is a point the Ohio governor hopes to carry into next Tuesday’s primaries in Connecticut, Delaware, Maryland, Pennsylvania and Rhode Island – which is perhaps his most favorable turf since his home-state primary on March 15, which is his only win so far.

Kasich, who also held no event to react to the results, jabbed his Republican rivals for their low favorability ratings at a town-hall meeting in Annapolis, Maryland, on Tuesday afternoon.

“When you have these sky-high negatives, nobody’s voting for you,” Kasich said. Looking toward a contested convention, he added: “It’s interesting because my positives are the highest in the field. The delegates are going to look and say, ‘If we nominate someone who’s going to get crushed, we lose the Supreme Court, we lose the United States Senate, we lose the majorities in the statehouses – it’ll be a wipeout.'”

For Trump, the challenge in New York had been winning “big league,” as he likes to say. Delegates in New York are awarded proportionally by congressional district; only if a candidate carries a district by 50 percent or more does he win all of the delegates.

Throughout the race, Trump has appealed to independent voters and disaffected Democrats, in addition to Republicans. New York’s relatively restrictive voting laws posed a threat. The primary was open only to registered Republicans, and voters hoping to change their political affiliation were required to do so more than six months before Tuesday’s election – a deadline missed by two of Trump’s children, Ivanka and Eric.

But Trump was buoyed by a primary electorate here that was less conservative and more supportive of a political outsider than in previous states, according to early exit poll results reported by CNN.

White evangelical voters – one of Cruz’s core blocs – made up only about a quarter of the Republican primary electorate, fewer than in any state but Massachusetts and New Hampshire, according to the poll results.

Meanwhile, more than 60 percent of GOP primary voters said they want the next president to hail from outside the political establishment. If that figure holds, it would mark the highest level of support for an outsider this year, according to CNN.

Trump spent little time campaigning in Manhattan, where he has lived for decades and his name adorns several tall buildings.

Instead, he barnstormed parts of the state that are struggling. At rallies on Long Island and in cities like Albany, Buffalo, Plattsburgh and Syracuse, Trump rattled off statistics illustrating people’s plight: lost jobs, companies shuttered and stagnant incomes. At each turn, Trump pledged to reinvigorate industry, grow employment prospects and improve the quality of life.

Trump also repeatedly reminded voters in his state that his definition of “New York values” is decidedly different than that of Cruz, who used the label as a slur for Trump’s past support for Democrats.

Trump often reflected on the Sept. 11, 2001, terrorist attacks to illustrate New Yorkers’ bravery. And at the New York State Republican Gala last week, where all three candidates spoke, Trump got the warmest reception as he extolled the values of hard work, devotion to family, high energy and courage.

“New York values were on display for all to see in the aftermath of 9/11, a strike at the heart of the city and our nation,” he said.