Israel IDF Chevron Shooter to Be Home for Pesach
Israel 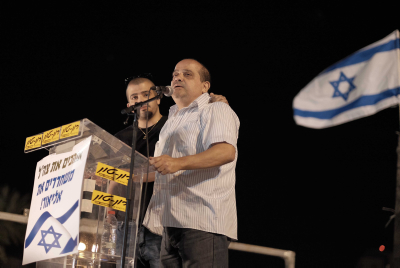 Elor Azaria, the soldier who shot at a terrorist in Chevron on Purim morning while he was neutralized and on the ground, after having been shot when he tried to stab soldiers, will be celebrating Pesach with his family, IDF prosecutors said. Azaria will be allowed to go home for Pesach, and will return to base on Sunday to resume his confinement to base while prosecutors prepare to put him on trial for manslaughter.

Azaria was not present Tuesday night, when about 8,000 people gathered in central Tel Aviv to call for freedom for the soldier, whose name was cleared for publication earlier in the day.

One theme stressed in the event was the freedom of soldiers to do their job, with numerous speakers, including the soldier’s father, proclaiming that “terrorists are not be ‘neutralized,’ they should be killed. Very few people know who you really are,” Azaria’s father Charley said. “You have a big heart, you grew up with values, morality and love.

“You always told me to ‘be strong,’ but how can I do that? We all have a father, son or relative in the IDF,” Charley Azaria said. “I want to tell my son: You cannot believe how many of them support you.”

While the event was largely quiet, there were several incidents in which members of the media claimed that they were accosted by members of the crowd. No reporters were injured, but feathers were ruffled. MK Shelly Yechimovich (Zionist Camp) said that the rally was full of “right-wing ruffians” and the government “has a responsibility to protect members of the media.” Also opposing the rally in the days before the event were a series of political leaders, including Prime Minister Binyamin Netanyahu and Defense Minister Moshe Yaalon, who claimed that the event was aimed at criticizing the IDF.

Reports last week said that the prosecutors would probably demand that the soldier serve several years in prison. According to the reports, the soldier’s attorneys are attempting to work out a plea deal to either reduce the charges even further, or to ensure that he will not be required to serve time.