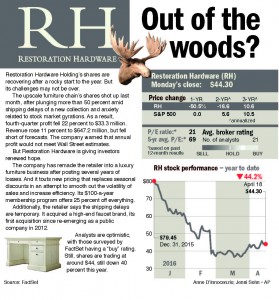 The gains in energy and mining companies came as prices for oil, copper and other basic materials rose.

Investors were mostly focused on the latest batch of corporate earnings and on what company managers have to say about their prospects for growing profits this year.

“The market is focused on where we are going to be three months from now, five months from now,” said Quincy Krosby, market strategist at Prudential Financial. “It’s all about the guidance, and it’s also all about what companies are doing to beat on the bottom line.”

All of the earnings growth this year is expected to come in the second half of 2016, noted Erin Gibbs, equity chief investment officer at S&P Global Market Intelligence.

UnitedHealth Group added 2.1 percent after it reported strong results for the first quarter and raised its guidance for the year. The health insurer also said it would cut back on participating in Affordable Care Act health care exchanges in a bid to stem losses related to the program. The stock gained $2.69 to $130.50.

Goldman Sachs’ latest results also gave the investment bank’s shares a lift. Goldman’s earnings beat Wall Street’s estimates, even though its profit sank by 56 percent from a year earlier. The stock rose $3.63, or 2.3 percent, to $162.65.

Some companies’ quarterly snapshots and outlooks failed to impress traders.

Netflix slumped 13 percent, a day after the company gave a disappointing forecast and reported first-quarter revenue that fell short of financial analysts’ forecasts. The stock lost $14.06 to $94.34.

IBM delivered improved first-quarter earnings thanks to a big tax refund, but also had lower revenue amid weaker software sales. The stock slid $8.53, or 5.6 percent, to $144.

Illumina sank 23.2 percent after the genetic testing tools maker predicted that sales in the first quarter will be far lower than analysts expected. Illumina shares were down $41.25 at $136.88.

This week, about 100 of the companies in the S&P 500 names are due to report quarterly results.

Beyond earnings, the market pushed up prices for mining and energy companies as the price of oil, natural gas, metals and other materials rose.