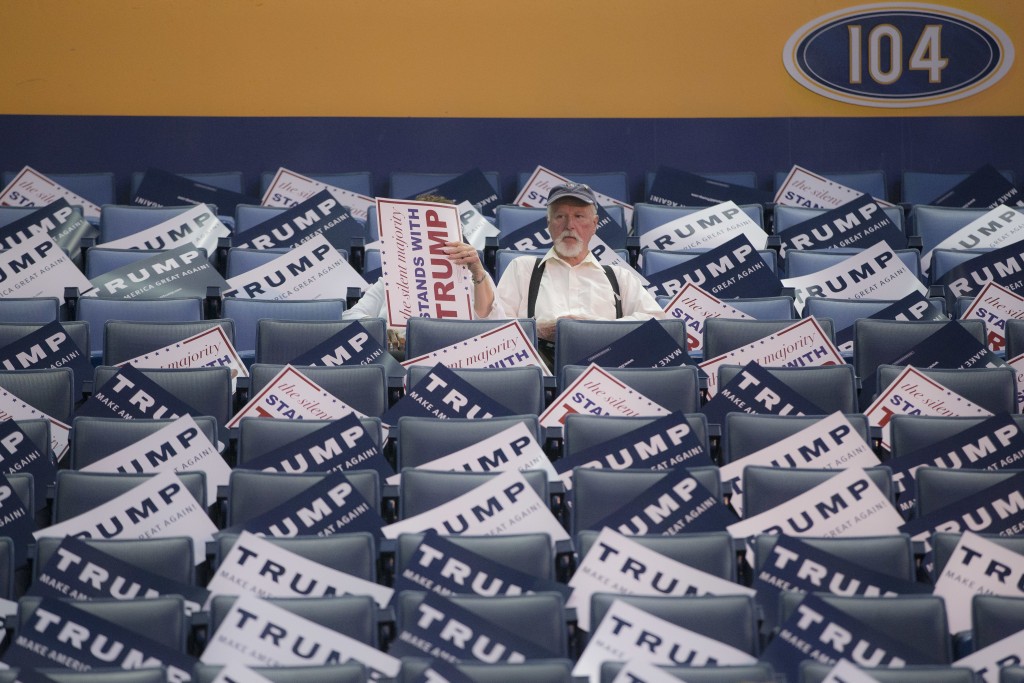 Competing on home turf, Republican Donald Trump and Democrat Hillary Clinton hoped to emerge victorious from Tuesday’s primaries in New York, contests that offer big delegate hauls and an opportunity for the front-runners to inch closer to their parties’ nominations.

Even before the New York results were in, Clinton’s campaign was declaring the Democratic race virtually over and warning rival Bernie Sanders that he risks damaging the party’s eventual nominee if he keeps up harsh criticism of the former secretary of state.

Clinton campaign manager Robby Mook said Sanders faces a “close to impossible path to the nomination” and predicted New York would result in Clinton taking “an important step to the nomination.” Sanders needs to win 68 percent of the remaining delegates if he hopes to clinch the Democratic nomination.

The lead-up to Tuesday’s voting created surreal scenes in New York, a state that hasn’t seen competitive primaries in decades. Candidates blanketed every corner of the state, from Manhattan and the surrounding boroughs to the working-class enclaves in Buffalo and Syracuse.

Trump and Clinton were hoping to win in part on the strength of their local ties. Clinton was twice elected senator from New York, while Trump was born in Queens and lives in a building bearing his name in Manhattan.

“We love this city,” Trump said Monday in brief remarks to reporters in the lobby of Trump Tower. “You look at the other folks that are running, they couldn’t care less about New York.”

For Trump, New York is an opportunity to rebound from a trying stretch for his campaign — and with an exclamation point. The biggest question for him heading into Tuesday is whether he captures more than 50 percent of the vote statewide, which would put him in strong position to win all of the state’s 95 GOP delegates.

Trump closed his New York campaigning with an evening rally in Buffalo, where thousands packed an arena to catch a glimpse of the billionaire businessman.

A big win for Trump is crucial if he hopes to clinch the nomination before the party’s convention in July. If the race isn’t settled by then, he faces the very real prospect of losing to Ted Cruz, whose campaign is mastering the complicated process of lining up individual delegates who could shift their support to the Texas senator after the first round of convention balloting.

Cruz, who infamously panned Trump’s “New York values” earlier in the primary, was bracing for a tough showing in the state. He was already looking ahead on the primary calendar, holding events Tuesday in Pennsylvania, which votes next week.

Clinton spent the final hours of campaigning in New York trying to drive up turnout among women and minorities, her most ardent supporters.

“We’re not taking anything for granted,” Clinton said Monday after greeting workers at the Hi-Tek Car Wash & Lube in Queens. “Tell your friends and your family, everyone, to please vote tomorrow.”

Clinton’s campaign has cast New York as a make-or-break moment for the Democratic race. A loss in her adopted home state would be a devastating political blow. But a big win would bolster her delegate lead over Sanders and put her closer to becoming the first woman nominated for president by a major political party.

Sanders stayed stubbornly close to Clinton, rattling off a string of wins in recent primaries and caucuses. But unless he can topple Clinton in a state like New York, he faces increasingly limited opportunities to change the trajectory of the race.

While polling shows Clinton with a comfortable lead in New York, Sanders held out hope for a closer race.

“This is a campaign on the move,” Sanders shouted to a crowd of thousands gathered along the waterfront in Queens, the Manhattan skyline serving as a dramatic backdrop. “This is a movement getting the establishment very, very nervous.”

Among Democrats, Clinton has accumulated 1,758 delegates to Sanders’ 1,076. Those totals include both pledged delegates from primaries and caucuses, as well as superdelegates, the party insiders who can back the candidate of their choice regardless of how their state votes. It takes 2,383 to win the Democratic nomination.

Trump leads the GOP race with 744 delegates, ahead of Cruz with 545 and Kasich with 144. Securing the GOP nomination requires 1,237 delegates.