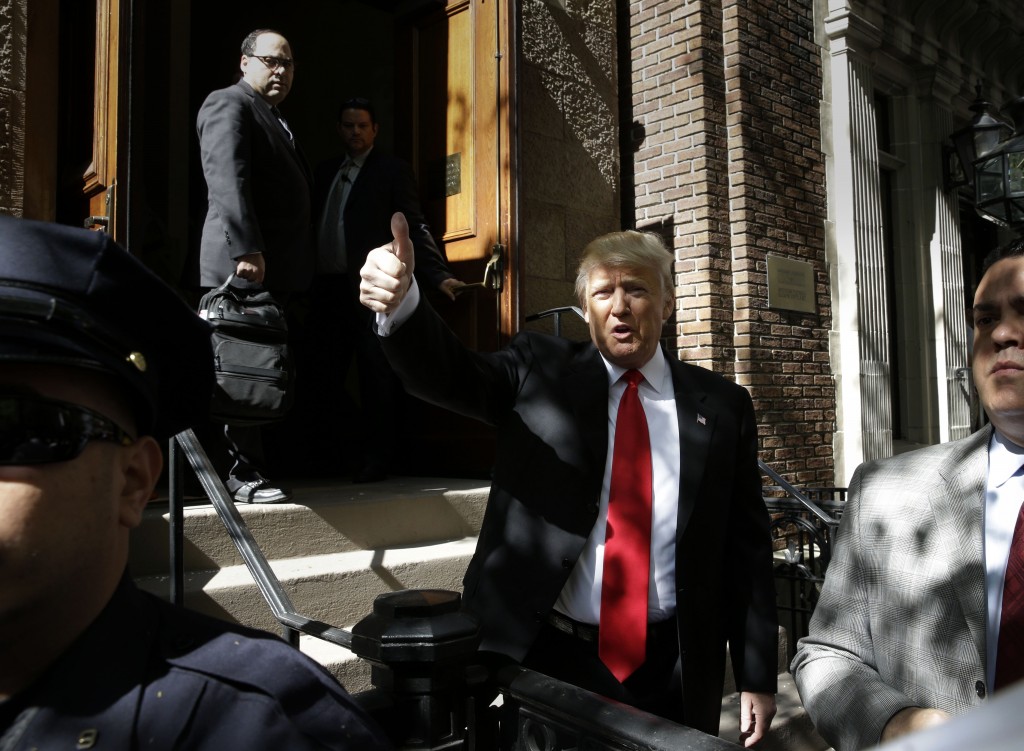 Donald Trump loves to reminisce about his long ride down the escalator in Trump Tower in June to announce his campaign for president. He’ll be back there to celebrate an expected New York victory Tuesday night. And the margin of Trump’s win will be hugely important in determining whether Republicans are headed for a contested convention. Hillary Clinton is looking for her own New York magic to raise the already-steep mathematical hurdles that Bernie Sanders faces in trying to derail her march toward the Democratic nomination.

A guide to what to watch on Tuesday night as the New York primary vote rolls in:

THE TIMELINE: Polls close at 9 p.m. EDT. Counties typically report their votes quickly, so expect about half the total vote to be counted and released within the first hour after polls close. Upstate counties usually are the first to report, with New York City boroughs following. Based on past voting patterns, New York City should represent about half of the Democratic primary vote, and about 13 percent of the Republican primary vote. Overall, about 90 percent of the statewide vote should be counted by 11 p.m. The choices on at least two ballots were known well in advance: New Yorkers Trump and Clinton cast their ballots early, with Trump taking note of this remarkable election year by observing, “Who would’ve thought.”

NIFTY FIFTY: The big question for Trump is how big and broad a home-state victory he can claim. Trump needs both a lopsided vote count and well-distributed support geographically to scoop up enough of New York’s 95 delegates to preserve his slim chance of locking up the Republican nomination before the GOP convention. If he wins 50 percent of the statewide vote, he gets all 14 statewide delegates. Otherwise, he has to share them with other candidates. Similarly, in each of the state’s 27 congressional districts, if a candidate gets 50 percent of the vote, he wins all three of that district’s delegates.

TOUGH MATH: With Clinton running ahead of Sanders in pre-primary polls in New York, her goal is to claim a big enough delegate haul to boost the idea that her nomination is inevitable. Heading into Tuesday’s vote, Sanders needed to claim 68 percent of remaining delegates to derail Clinton. Even after a string of recent victories in primaries and caucuses, Sanders can’t afford to lose even a small bit of ground.

TRUMP’S TONE: Does Trump use his election-night appearance to continue stomping his feet about “rigged” GOP delegate rules or switch to a more positive, unifying message for Republicans? The man whose candidacy has upended presidential politics has faced nothing but bad news since the lead-up to Wisconsin’s primary two weeks ago, where he lost to Cruz by 13 percentage points.

CLINTON’S FOCUS: Does Clinton use her Times Square primary-night appearance to take on Trump and the Republicans, or spend more time fending off Sanders’ persistent criticisms of her as an uninspired candidate too beholden to Wall Street and corporate interests? She’s itching to leave Sanders behind and get on to the main event.

SANDERS’ IDEALISM: Clinton’s challenger will spend Tuesday night campaigning at Penn State, working to ignite his loyal following among younger voters. Will he acknowledge the New York results, or press the argument that his liberal agenda is more than the pie-in-the-sky fantasy that Clinton suggests?

VOTER SENTIMENT: Exit polls will tell a lot about where voters’ heads are in this anything-but-typical election year. Are Republicans excited to vote for their favored candidate, or more nervous about the alternatives? In both parties, are people willing to vote for any of their party’s candidates in November, or will they consider defecting if their candidate doesn’t win?

TED CRUZ: The man who mocked “New York values” earlier in the campaign would be thrilled to scrape together a third of New York’s delegates. He’s campaigned recently upstate, and in the Bronx and Brooklyn. He’ll be watching the returns from Pennsylvania, which votes next week.

JOHN KASICH: Ohio’s governor would be satisfied to pick off a few delegates in targeted areas, such as Buffalo, the Hudson Valley and Long Island. Kasich already is looking past New York: He’ll spend Tuesday night at a town hall-style meeting in Maryland, which also votes next week.