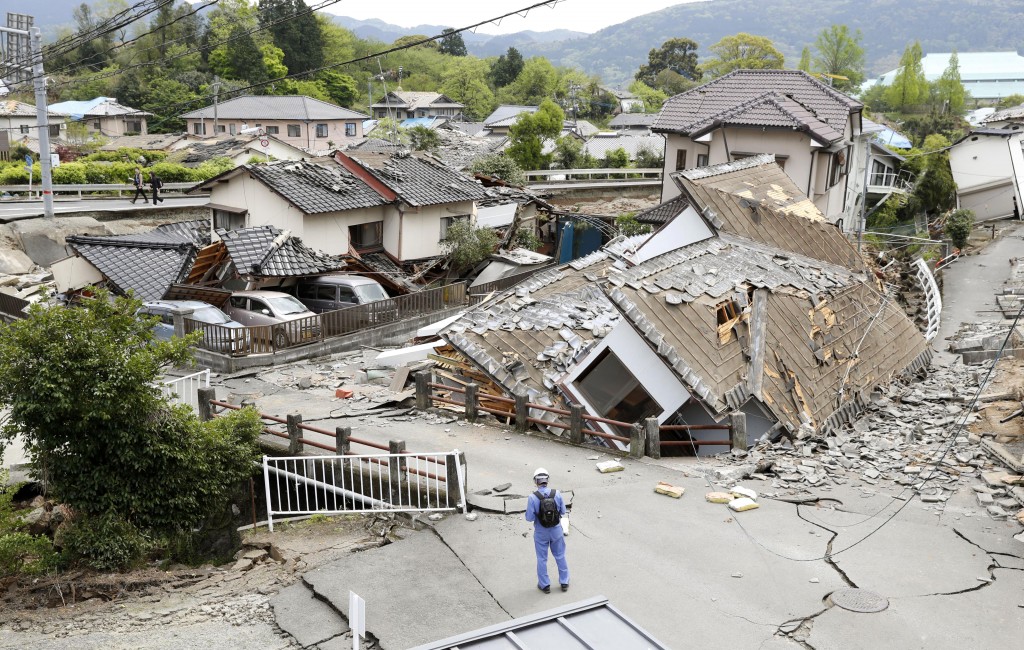 The twin earthquakes that have paralyzed parts of southern Japan are having ripple effects far beyond the disaster zone, with automakers and other manufacturers suspending output in other areas due to disruptions in its parts supplies.

Toyota Motor Corp. says it has stopped production at a factory in Kyushu, where the quakes struck late Thursday and early Saturday, killing at least 42 people and leaving nearly 1,100 people injured.

The shutdown will progress to other plants in Japan through Friday. Output will resume depending on the availability of parts.

Honda Motor Corp. said production at its factory in Kumamoto, the largest city seriously affected by the quakes, would be suspended until Friday.

“Subsequent production plans will be determined according to facility restorations and component supply,” the company said in a statement.

The powerful earthquakes have caused electricity outages and disruptions to water supplies. Roads and airports in the region were affected, with some damaged areas in hard-to-reach mountain areas cut off by landslides that blocked roads and bridges.

Supply chain disruptions will hurt output by various manufacturers, including Toyota, which is cutting its output in Japan by 50,000 in April, according to the financial newspaper Nikkei, or about 8 percent of total production. Tourism will also take a big hit.

“The impact to near-term economic activity looks inevitable, while the comprehensive picture is difficult to gauge now, particularly due to the continued aftershocks,” Masamichi Adachi of J.P.Morgan said in a commentary. Overall, the risk to the outlook for growth is “to the downside” he said.

Some of the worst affected areas are deep in the mountains surrounding Mount Aso, Japan’s largest active volcano, an area renowned for dairy farming. But one of the hardest hit cities was Mashiki, a center for semiconductor fabrication and other manufacturing.

Though much of Toyota’s manufacturing is centered in central Japan’s Aichi prefecture, the company has suppliers scattered across Japan and worldwide. Up to 15 plants could be affected by the quake-related disruptions, according to a statement the company released Sunday.

Japanese share prices fell Monday, though there were multiple reasons for gloom. Apart from the potential economic impact of the quakes, an effort by major producers to shore up oil prices by freezing output fell apart over the weekend and the Japanese yen surged, in another potential blow to manufacturers who benefit when the yen weakens.