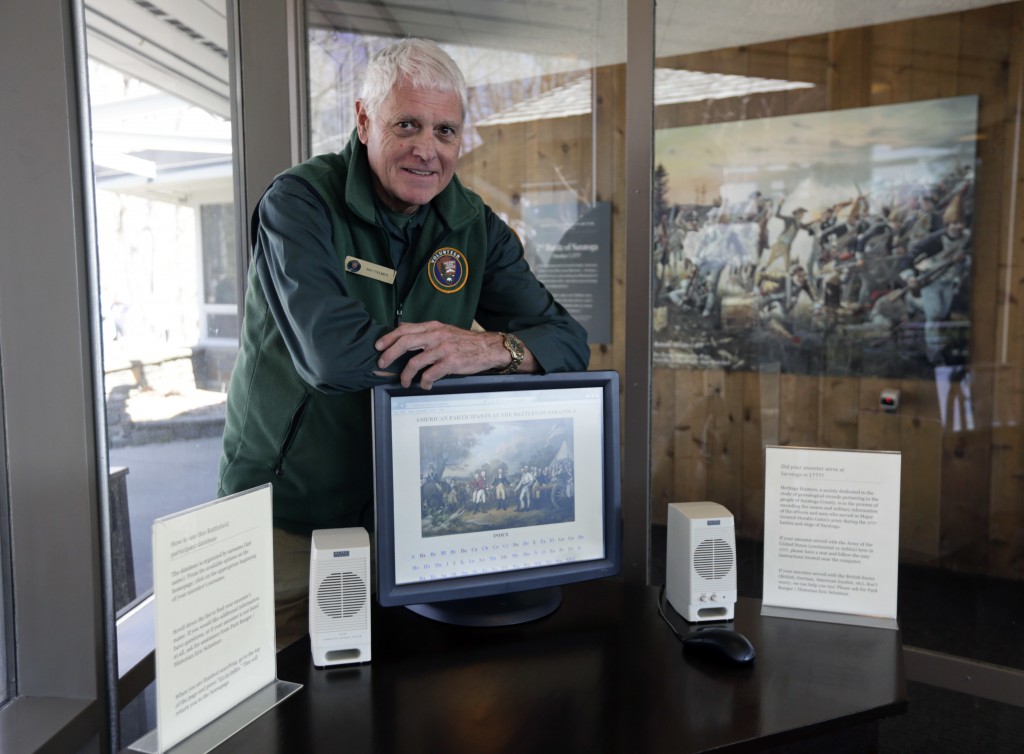 Kent Keyser was surprised to learn a historian at a Revolutionary War battle site knows the name of his ancestor, a private from Virginia who participated in a daring nighttime attack.

In fact, Michael Sheehan, of New York’s Stony Point Battlefield State Historic Site, is quite familiar with Pvt. William Keyser and hundreds of his fellow soldiers after researching old pension records and other documents available online. Two hundred and forty one years after the American Revolution began with the Battles of Lexington and Concord on April 19, 1775, many of the Minute Men and Continental Army soldiers who fought the redcoats from Boston to South Carolina are no longer anonymous figures from the history books.

Their names, hometowns, military service, physical descriptions — and in some cases, whether they deserted the American cause — are increasingly accessible as national and state parks and other Revolutionary War sites compile soldier lists that are a boon to genealogy buffs.

“I was blown away,” Keyser said about the detailed information compiled by Sheehan, the historic site interpreter at Stony Point, a small peninsula jutting from the Hudson River’s west bank 40 miles north of New York City.

The Stony Point staff has spent more than 20 years compiling the names of the approximately 1,150 American soldiers known to have captured the British defenses on the night of July 16, 1779. The digitizing of military documents on such websites as Fold3 have made the task easier, replacing time-consuming trips to local, state and national records repositories.

“Nobody now has to drive down to Washington, D.C., to look for records at the National Archives,” Sheehan said. “You can look at it on the computer at your office or home.”

Eric Schnitzer, a park ranger and historian at Saratoga National Historic Park in upstate New York, said there’s been a movement over the past two decades to identify the rank-and-file Revolutionary War soldiers who did the fighting and dying. “Otherwise,” he said, “they’re just a bunch of guys without names.”

It’s not just the Revolutionary War sites that are seeing more interest in the people who fought the battles. The popularity of online genealogy research has led to increases in new members for the Daughters of the American Revolution, according to officials at DAR headquarters in Washington. The biggest increase has been in the past four years, with membership rising from just under 170,000 in 2012 to more nearly 184,000 this year.

Here are some of the Revolutionary War sites that have created lists of names or are planning to, along with links to the places that have digitized their information:

The site has compiled the names of about 450 American soldiers who captured the British outpost, including several of the 15 Continentals who were killed. There are no immediate plans to digitize the information, but Sheehan said he hopes someday the park’s information will be posted online for easier public access. He said he fields phone and email inquiries year-round from people looking for details on ancestors who fought at Stony Point.

A local genealogy group called Heritage Hunters has created a database of the 18,000-plus American soldiers who fought the British and their German allies in the two Saratoga battles in September and October 1777. The group’s volunteers started gathering names in the late 1990s. In 2010, the names of some 15,000 American soldiers were posted on the group’s website, which can also be accessed on a computer in the Saratoga park’s visitors’ center. They’ve since added more than 3,000 names, and hope to someday add the names of the redcoats, Loyalists, Native Americans and German mercenaries who fought at Saratoga.

The effort to digitize the muster rolls of the Continental Army units that spent the winter of 1776-77 encamped at Valley Forge, Pennsylvania, was begun in the early 1990s by two volunteers. Today, the Muster Roll Project’s team of volunteers has posted the names of more than 25,000 soldiers on its website. The park’s visitors’ center has two computers linked to the online database. “More and more people are getting interested in their ancestors,” said Dona McDermott, the park’s archivist. “I think we are all benefiting.”

Historians at the Virginia park’s Yorktown Battlefield have begun compiling a database of approximately 10,000 American troops who participated in the siege that led to the British surrender in October 1781. “We are a long way from having that completed much less having it accessible over the internet,” Robbie Smith, a park ranger at Yorktown, said in an email. “It will most probably be a good number of years before we get to that point.”

The Massachusetts park has a list of the 4,000 Americans who fought in the war’s opening battles at Lexington and Concord. Jim Hollister, a park ranger and historian, said a friends group plans to post the list online, but he could give no estimate of when that will happen. Having Revolutionary War soldiers’ names and personal details available online can offer insights into the lives of the men who won the nation’s freedom, Hollister said. “By being aware of who they were as people, it makes that history all the more real to us and easy to understand,” he said.

A historic preservation group in New York’s Hudson Valley is working to protect that last remnants of what was the Continental Army’s largest supply depot in the North. The Friends of the Fishkill Supply Depot has compiled a list of more than 80 soldiers, most of them American, known to have died at Fishkill and believed to be buried in a cemetery that could hold the graves of hundreds of soldiers.