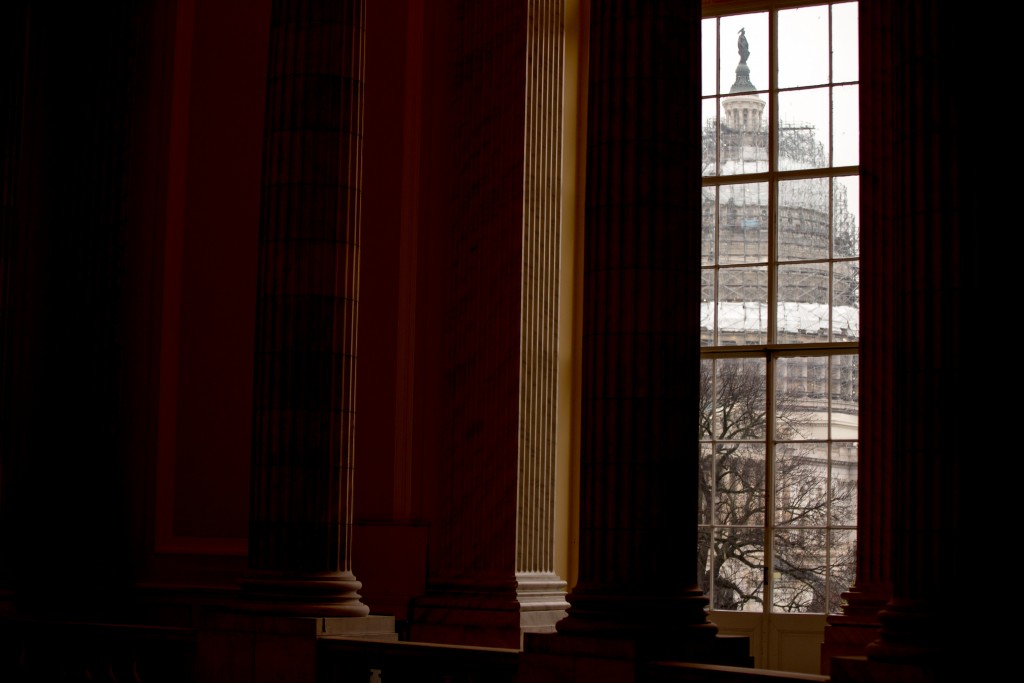 All that talk of an angry America?

An Associated Press-GfK poll finds that most Americans are happy with their friends and family, feel good about their finances and are more or less content at work. It’s government, particularly the federal government, that’s making them see red.

Almost eight in 10 Americans say they’re dissatisfied or angry with the way the federal government is working, while about the same proportion say they’re satisfied or enthusiastic about their personal lives. Republicans are far more likely to be angry — half of GOP voters, compared with about one-quarter of Democrats or independents — and those Republicans are much more supportive of Donald Trump, the front-runner for the party’s presidential nomination.

Still, the anger isn’t so much driven by political ideology as it is by an overall disdain for a political system that doesn’t seem to be working, voters said in follow-up interviews. They’re upset with both parties, as well as career politicians and Washington insiders who, those surveyed said, don’t put their constituents’ interests first.

“There are too many lobbyists and people who are not really working for the people anymore. They’re working to line their own pockets,” said 37-year-old Greg Boire of Belding, Michigan, who works as a bank customer service representative and voted for Trump in that state’s Republican primary. “It happens on both sides. … It’s just the whole government in general.”

John Santoro of San Jose, California, a 58-year-old market development manager for a company that makes semiconductor-related products, said he’s doing well financially but is angry about a lack of progress to lower the country’s debt.

He mostly blames President Barack Obama, but “politicians on both sides of the aisle are to blame because they just can’t get anything done. They just fundraise and get contributions from special interests.”

The AP-GfK poll showed that angry Republicans such as Boire and Santoro were much more likely than those who are just dissatisfied to have a favorable view of Trump, by 62 percent to 42 percent. Fifty-eight percent of dissatisfied Republicans, but just 36 percent of angry ones, have an unfavorable opinion of Trump.

Both men say they do support Trump — to a point. They believe he could shake up Washington, but worry about his rhetoric and lack of campaign organization.

Boire said he’s impressed that Trump is spending his own money and that what he says “is his opinion and not that of the lobbyists.” But Boire would be satisfied if the more politically experienced Texas Senator Ted Cruz won the nomination because Trump “does not have the filter to shut off” negative comments.

Santoro said he might vote for Cruz in the California primary if Trump doesn’t “cinch things up” and run a more professional campaign.

Even so, Trump has harnessed anger toward the federal government to win many die-hard supporters, like 58-year-old Debra Waterson of Petoskey, Michigan. She supported Obama in 2008 and former Governor Mitt Romney, R-Mass., four years ago.

She’s upset that the gun lobby has a strong influence in Washington and that the Senate won’t vote on Obama’s nominee for Supreme Court. But she’s even angrier about the economy and foreign trade deals, so she voted for Trump in the Republican primary.

“Up here in northern Michigan, there is so much unemployment and so many can’t afford to eat or buy medicine,” said Waterson, who said her family is getting by.

In the Democratic race against Hillary Clinton, Vermont Senator Bernie Sanders also has drawn support of voters who say they’re fed up with the federal government.

Retired Miami postal worker Kenneth Olinsky, a Sanders supporter, said he’s angry at Republicans in Congress for being “obstructionist” on legislation that could help working-class or low-income families.

“They haven’t done anything for the people as much as they’ve done for the wealthy and for businesses,” said Olinsky, 61. “There is a definite class system in this country; it’s the haves against the have-nots.”

Still, two-thirds or more of Democrats and Republicans say they’re at least satisfied with their personal and family relationships, financial situations, careers and work-life balance. Independents lag behind on each of those measures, but are still more likely than not to be satisfied with each.

Christopher Ashby, 32, a stay-at-home dad in Albemarle, North Carolina, who describes himself as a very conservative Republican and firm Trump supporter, said he is angry about government handouts for people and corporations and the influence of lobbyists and special-interest groups.

“For everyone in politics at this moment, it’s a career, and nobody is in this career to help the little person,” said Ashby. “We need a complete whitewash of the system [because] politics should … be something you do because you love helping the people.”