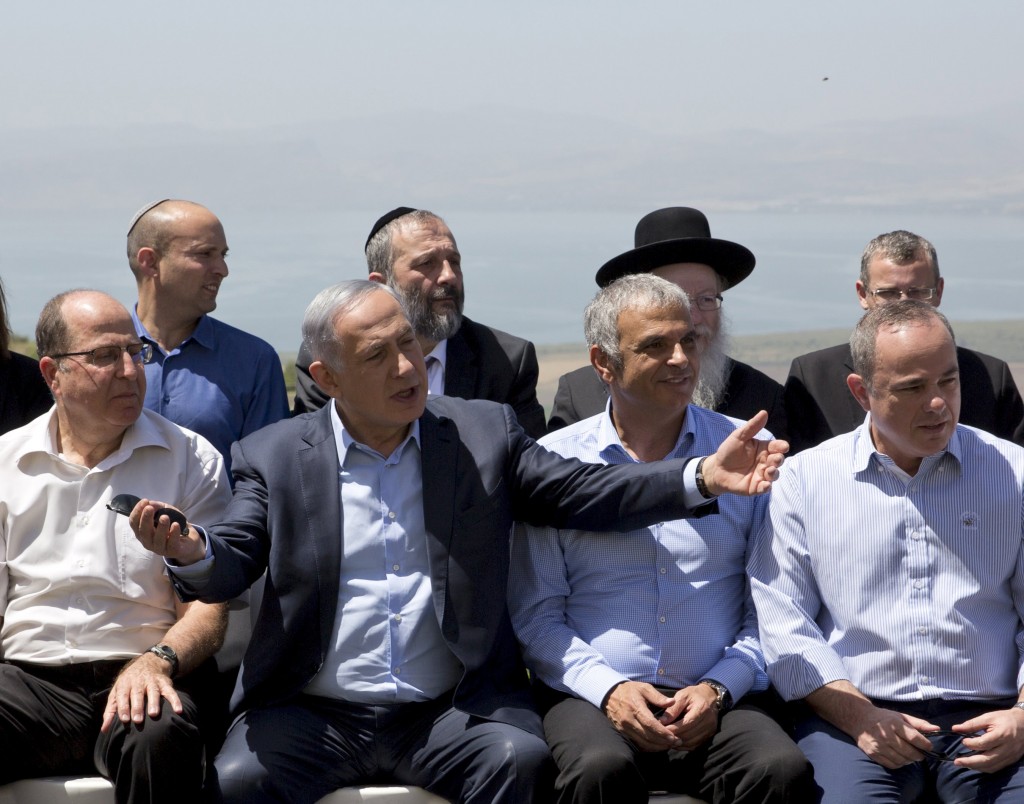 Prime Minister Binyamin Netanyahu declared on Sunday that Israel would never relinquish the Golan Heights, in a signal to Russia and the United States that the strategic plateau should be excluded from any deal on Syria’s future.

“The Golan Heights will remain in Israel’s hands forever,” Netanyahu told his cabinet, which met for the first time on the Golan since the area was captured from Syria in 1967 and annexed in 1981 – a move that has not won international recognition.

Netanyahu, who made a similar statement during an election campaign in 2009, said he had spoken by telephone with U.S. Secretary of State John Kerry over the weekend and told him that Israel’s security must not be compromised by any peace agreement to end Syria’s five-year-old civil war.

That would mean, Netanyahu said, that “at the end of the day – Iranian, Hizbullah, and IS forces would be expelled from Syrian territory.”

Iran, one of Israel’s main foes, as well as Tehran’s Lebanese proxy, the Hizbullah terror group, have supported Syrian President Bashar al-Assad in the conflict against rebel forces and Islamic State terrorists.

Netanyahu urged the international community “to finally recognize that the Golan will remain permanently under Israeli sovereignty.”

Officially, the Golan was chosen as the venue for the cabinet session last month as a way to mark the anniversary of Netanyahu’s 2015 election victory. But the timing was seen by some political commentators as linked to talks on Syria that Netanyahu is due to hold with Russian President Vladimir Putin later this week. Moscow’s military and diplomatic interventions are considered crucial to the resolution of the crisis.

Though Russia is committed to keeping Syria intact under Assad, it has not publicly broached the future of the Golan.

“Whatever happens beyond the border, the (Golan) line is not going to change,” Netanyahu said, in his remarks on his conversation with Kerry.

Having sent in Russian forces last year to turn the tide against a rebellion raging since 2011, Putin, who meets Netanyahu in Moscow on Thursday, wants to preserve Assad’s central rule as part of national reconciliation efforts. Other powers want him gone.

While formally neutral on the civil war next door, Israel has predicted that Syria’s sectarian partition is inevitable.

Past U.S.-backed Israeli-Syrian peace efforts were predicated on a return of the Golan, where some 23,000 Israelis now live alongside roughly the same number of Druse Arabs loyal to Damascus.