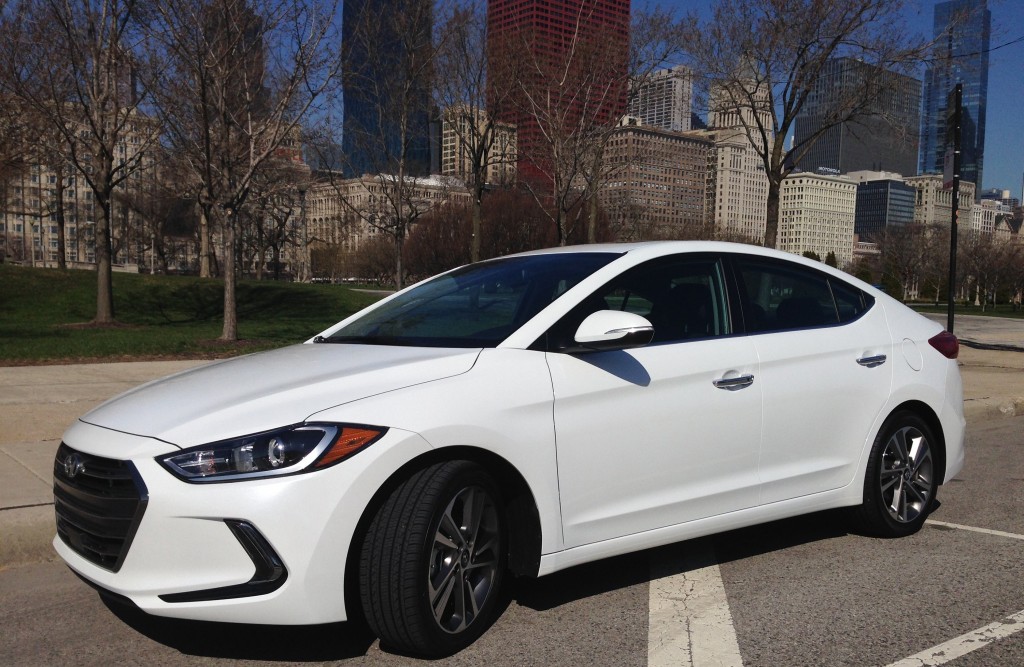 The Hyundai Elantra compact has been known for doing more with less on the dollar. The outgoing model won North American Car of the Year in 2012, arguably the industry’s most independent and esteemed new-car honor, for being more luxurious, more fuel efficient and more versatile and roomier than a compact should at under $20,000.

The fully redesigned 2017 model pushes advanced technology but it also pushes the price tag at a time when the compact segment has never been better. The base model is a bit cheaper than the outgoing model at $17,150, but the top-of-the-line Limited trim is $650 more than 2016, starting at $22,350. It’s less expensive than the winning 2016 Honda Civic Touring, and the performance-leaning 2015 Volkswagen Golf. And it’s loaded with everything from heated front seats to blind spot detection and a worry-free suite of warranties.

The sixth-generation Elantra looks more advanced on the outside as well. It sports Hyundai’s big hexagonal grille and vertical daytime running lights similar to the Toyota Avalon, which along with new high-intensity headlights and standard 17-inch alloy wheels make the Elantra’s extra inch of width and length look brawnier and more filled out.

It doesn’t look small on the outside or inside. It has enough interior volume to be classified as a midsize sedan based on the EPA, but don’t let that fool you; so does the redesigned 2016 Honda Civic and the 2016 Toyota Corolla.

Like the new Civic, four adults can fit comfortably and there is ample trunk space.

For driving feel, the Elantra has a tough time competing with the Golf, Civic and Mazda3. The Elantra’s new 2.0-liter dual-overhead camshaft four-cylinder engine works hard to make 147 horsepower and a pokey 132 pound-feet of torque. In sport mode, those dual cams let the engine rev to 6,000 and 7,000 rpm before the new six-speed automatic transmission kicks in.

Sport mode is fun but not as fun as the fuel economy gains of more than 2 percent, thanks in part to the powertrain and the use of more lightweight high strength steel. It’s more rigid, making the ride quieter, but in everyday driving we didn’t notice any great improvements to handling.

Most drivers will notice fuel economy more, and the Elantra scored big with 45.3 mpg averaged over a few commutes at a 43 mph sweet spot, evidently. The EPA estimate is 37 mpg highway.

The 2017 Elantra beats the Civic and Golf in the driver’s main source of interaction, the connected car cockpit.

The tester came with the tech package, which includes navigation and an 8-inch touch screen that is one of the better ones at this price point (especially compared with the Civic). Buttons and knobs complement the touch screen in a center-stack design that is conventionally familiar but not out-of-date. Consumers who are used to the classical console design and daunted by some of the botched newfangled attempts at simplification will appreciate it. Hyundai’s redundant steering wheel controls use toggles in the middle for volume and tuning, with buttons on top and bottom. Thumbs used to texting will pick it up intuitively, while less-evolved users should be pleased that the fingers never leave the steering wheel.

For $2,500, the tech package includes other goodies, including power sunroof, heated rear seats, a better sound system and Apple CarPlay and Android Auto.

It’s a pretty good deal for shoppers that see connected-car tech as a key convenience, and a distinct advantage over the Civic and Golf in a class packed with capable competitors.

2017 Hyundai Elantra Limited at a glance:

Parting shot: One of the best-valued compacts gets more tech, costs more.