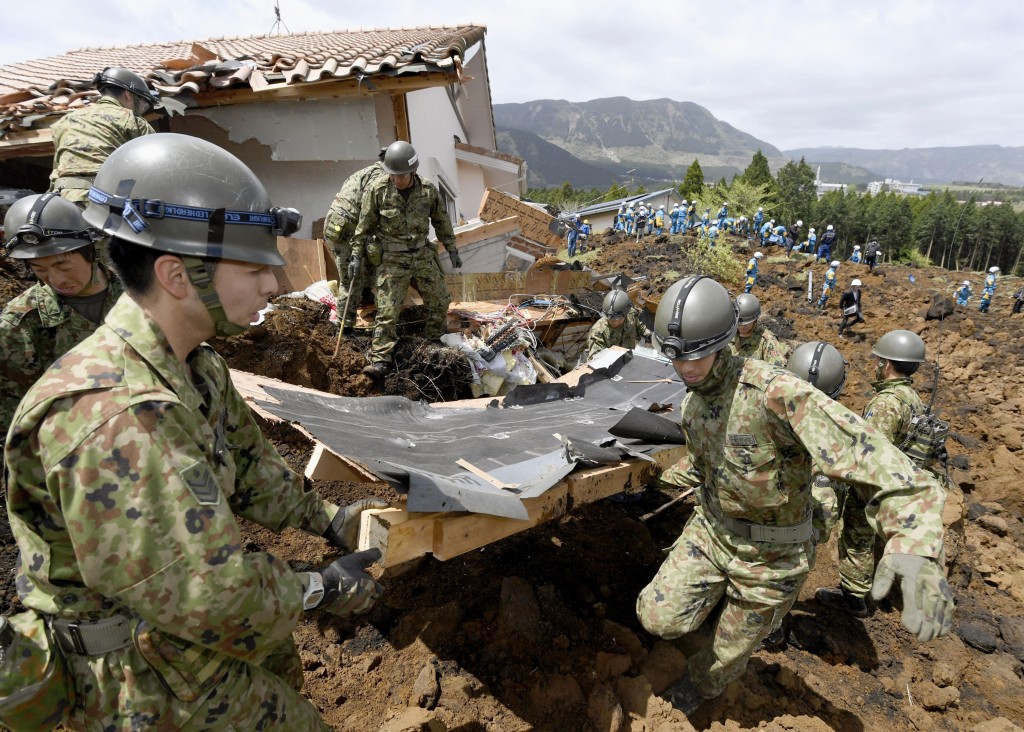 Eleven people remained missing Sunday in southern Japan from two powerful earthquakes that killed 41 people, as the U.S. military announced it was preparing to join relief efforts and Toyota said it would suspend vehicle assembly in Japan over the course of next week because of quake-related parts shortages.

Thousands of rescue workers fanned out in often mountainous terrain to search for the missing. Rescue helicopters could be seen going into and out of the area, much of which has been cut off by landslides and road and bridge damage.

With 180,000 people seeking shelter, some evacuees said that food distribution was a meager two rice balls for dinner.

U.S. Forces, Japan said it is getting ready to provide aerial support for Japan’s relief efforts. The U.S. has major Air Force, Navy and Marine bases in Japan, and stations about 50,000 troops in the country.

Japanese Prime Minister Shinzo Abe said, “We are extremely grateful, and we would like to coordinate quickly and have the emergency relief be transported in as soon as possible.”

Shiori Yatabe, an official at the Kumamoto prefecture crisis management department, said 11 people were missing. She didn’t have a breakdown, but Japanese media reported that eight were in Minamiaso village.

Earthquakes on successive nights struck Kumamoto city and the surrounding region late last week. Nine people died in the first earthquake, and 32 in the second. Kumamoto, a city of 740,000, is on the southwestern island of Kyushu.

Overnight rainfall did not appear to cause any more landslides, as had been feared, and the skies had cleared by Sunday morning.

About 80,000 homes in Kumamoto prefecture still didn’t have electricity Sunday, the Ministry of Economy, Trade and Industry said. Japanese media reported earlier that an estimated 400,000 households were without running water.

More than 1,000 buildings were damaged in the two earthquakes, including at least 90 that were destroyed.

The hardest-hit town appears to be Mashiki, on the eastern border of Kumamoto city, where 20 people died.

The second earthquake triggered major landslides in Minamiaso. One tore open a mountainside from the top to a highway below. Another gnawed at a highway, above a smashed house that had fallen down a ravine. In another part of the village, houses were hanging precariously at the edge of a huge hole cut open in the earth.

Toyota Motor Corp. said it would shut down the assembly of vehicles in Japan over the course of this week because of parts shortages stemming from the earthquakes.

The shutdown will begin on Monday at a factory in Kyushu and progress to other plants in Japan through Friday. Toyota said on its site Sunday that resumption of operations would depend on the availability of parts.

Other companies, including Sony, have announced stoppages of some of their factories in Kyushu.