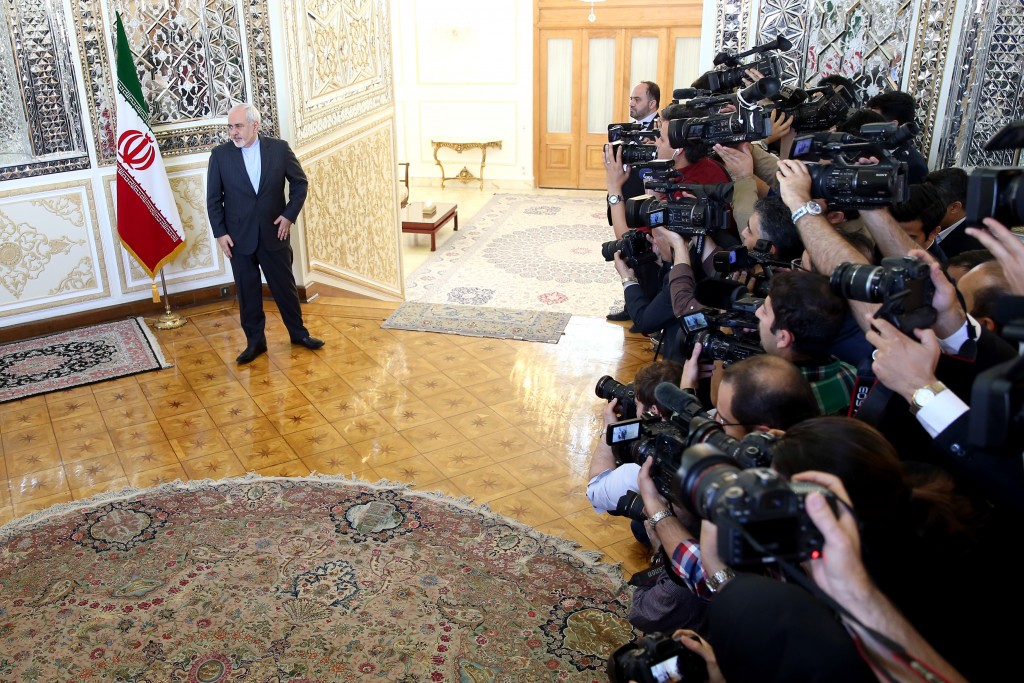 Iran, seeking European leverage to secure better terms from the United States following last year’s nuclear deal, has asked the European Union to put pressure on Washington to let it into the global financial system.

In a visit to Tehran by a high-powered EU team in which both sides spoke of a significant expansion in economic and energy ties, Iran’s Foreign Minister Mohammad Javad Zarif welcomed EU support for its bid to join the World Trade Organization and spoke of a “new beginning” in relations with Europe.

EU Foreign Policy Chief Federica Mogherini, whose team of seven commissioners was the biggest to visit Tehran in more than a decade, said it was in Europe’s interest to make sure European banks felt confident to do business in Iran.

But she chided Tehran for holding ballistic missile tests despite last year’s nuclear deal and said the EU would continue to stand firm on human rights violations in Iran.

Following last year’s nuclear deal, world powers led by the United States and the EU lifted most sanctions on the long-isolated Islamic Republic in January in return for curbs on its nuclear program.

Some European banks like France’s bank BNP Paribas or Germany’s Commerzbank AG, once hit by huge U.S. fines for sanctions busting, fear falling foul of the many other restrictions imposed by Washington that remain in force.

The White House said on Friday that the nuclear agreement did not include allowing it access to the global financial system.

“Iran and the EU will put pressure on the United States to facilitate the cooperation of non-American banks with Iran,” Zarif said at a news conference in Tehran with Mogherini.

“It’s essential that the other side, especially the United States, fulfill its commitments not on paper but in practice and remove the obstacles, especially in the banking sector.”

Zarif and Mogherini said in a joint statement that the EU and Iran were in agreement on the expansion of economic relations and “encouraging banking cooperation.”

“The EU will support and assist Iran to become a member of the World Trade Organization (WTO),” and will pursue opening a full EU diplomatic mission in Tehran, the statement said.

“Today is a new beginning in Iran and EU relations. We hope this cooperation between the Iranian nation and the European Union brings about shared interests and global development,” Zarif was quoted as saying by the state news agency IRNA.

Mogherini, who headed a team of seven EU commissioners, said cooperation on energy would also be important as Iranian oil and gas would again become a part of the European energy mix and help increase the bloc’s energy security.

Iranian officials have complained that their country is not getting the full economic fruits of the nuclear deal due to American “deceitfulness,” but Washington believes it has been Iran’s missile launches that have scared businesses off.

Since July’s nuclear deal, the Islamic Revolutionary Guards Corps (IRGC) has conducted four ballistic missile tests and the U.S. Treasury has in return put new sanctions on entities and individuals linked to the program.

President Obama said this month that Iran had so far kept to the nuclear agreement, but Tehran’s launch of ballistic missiles “with slogans calling for the destruction of Israel” undermined the spirit of the deal.

Mogherini said she did not see the missile tests as a breach of the accord between Iran and world powers, though she added it was a worrying step.

“This doesn’t mean that we are not concerned,” Mogherini said. “On the contrary, we see this as a worrying step … and we are encouraging [Iran] to abstain from further steps.”

Despite the lifting of nuclear related sanctions, the EU extended some of its sanctions on Iran because of perceived violations of human rights in the Islamic Republic.

The EU is troubled by the more than 1,000 executions in Iran last year. Mogherini said the EU would continue to be firm on the issue of human rights while maintaining a dialogue with Iran.