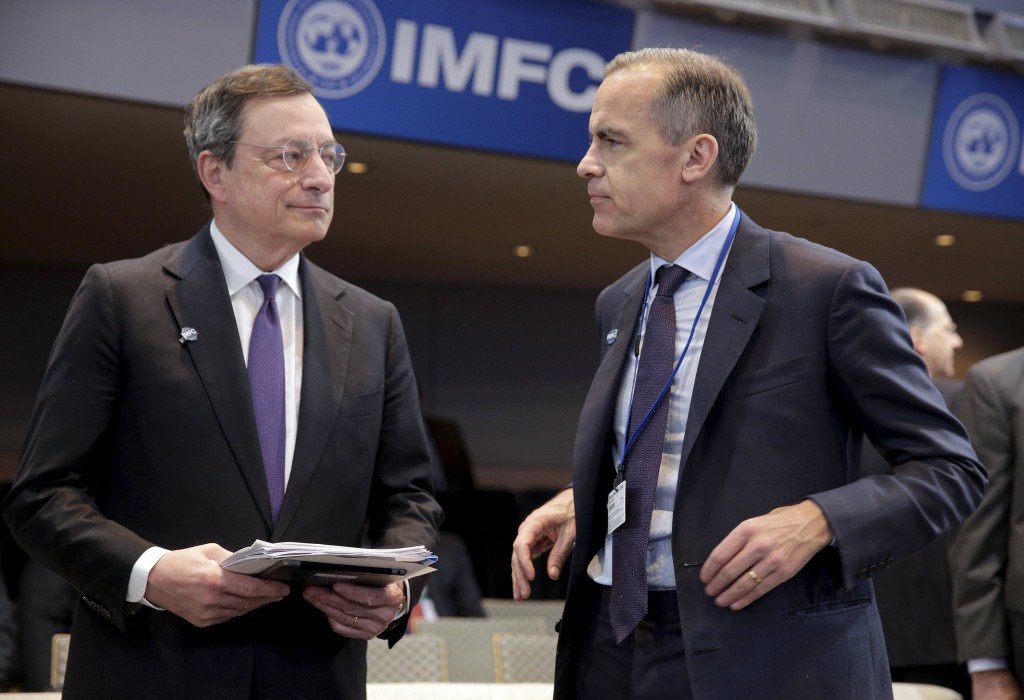 The hope is that stronger growth can boost long-stagnant wages and combat a rising backlash against globalization.

The finance leaders said they will use all the policy tools available to them to promote “strong, sustainable, inclusive, job-rich and more balanced global growth.”

The commitment came in a joint statement from the policy-setting panel of the 189-nation International Monetary Fund at the end of its spring meeting in Washington.

Markets have stabilized after a chaotic start to the year, when fears were growing about a possible new global recession. But the IMF’s communique cited a long list of threats, from terrorist attacks and the Syrian refugee crisis to the shock to global confidence from a potential exit by Britain from the European Union.

“Against this backdrop, it is important to buttress confidence in our policies,” the IMF said.

The concern about economic growth was heightened at the beginning of this year by tumult in financial markets. Investors feared that China’s economy, the world’s second biggest, was slowing more than expected, raising the possibility of a global recession.

Agustin Carstens, the head of the Bank of Mexico and chairman of the IMF’s policy panel, said finance leaders realized “there was no room for complacency” even though markets have stabilized.

Many nations buffeted by the forces of globalization have lost jobs and workers’ wages have stagnated. In the United States, this anger has propelled the presidential candidacy of Republican front-runner Donald Trump. In Britain, voters will decide in June whether to leave the European Union.

The finance leaders said they believed their actions would help stimulate growth and boost jobs and wages. But they acknowledged there was no time to waste in producing results.

“Clearly the question is how much is going to get done back home,” IMF Managing Director Christine Lagarde said.

The IMF policy group and the G-20 leaders also worked on a stronger response to international tax evasion, stepping up efforts to penalize countries that do not share tax information.

This issue came under renewed scrutiny after the leak this month of 11.5 million confidential documents from a Panamanian law firm. The Panama Papers show how some of the world’s richest people hide assets in shell companies to avoid paying taxes.

Iceland’s prime minister resigned after it was revealed that he and his wife set up a company in the British Virgin Islands, a tax haven. British Prime Minister David Cameron was forced to release his tax returns for the first time after the papers raised questions about his family’s affairs.

Even as the G-20 and IMF pledged greater cooperation, differences among nations remained.

But German Finance Minister Wolfgang Schaeuble said that uncertainty in financial markets warranted a “high degree of caution” and control of government spending.

In remarks to the IMF panel, Lew said at a time of “slow and uneven global growth, avoiding beggar-thy-neighbor exchange rate policies” was essential. The United States has in the past worried about currency manipulation by China and Japan to help their exports.

Schaeuble said Germany intended to stick to its plans for a balanced budget, warning that rising budget deficits can drag down growth.

World markets were rattled in January by a drop in the Chinese currency and by tumbling oil prices, potential signs of deep trouble for the global economy. Since then, the yuan and oil prices have stabilized. On Friday, China said its economy registered solid 6.7 percent growth the first three months of 2016.

Still, the IMF this past week downgraded its outlook for the economy this year and cited risks that could make things worse: conflict in the Middle East, the refugee crisis in Europe, Britain’s possible exit from the EU, and the growing political backlash in the United States and Europe against international trade.

Japanese Finance Minister Taro Aso told reporters that financial markets are starting to regain “composure.” But he expressed concern about risks from volatility in capital flows and foreign exchange rates.

Even China’s solid first-quarter numbers raised fears that Beijing is backsliding on commitments to reform its economy. Critics worry it pumped up those figures by investing heavily in inefficient state-owned companies.