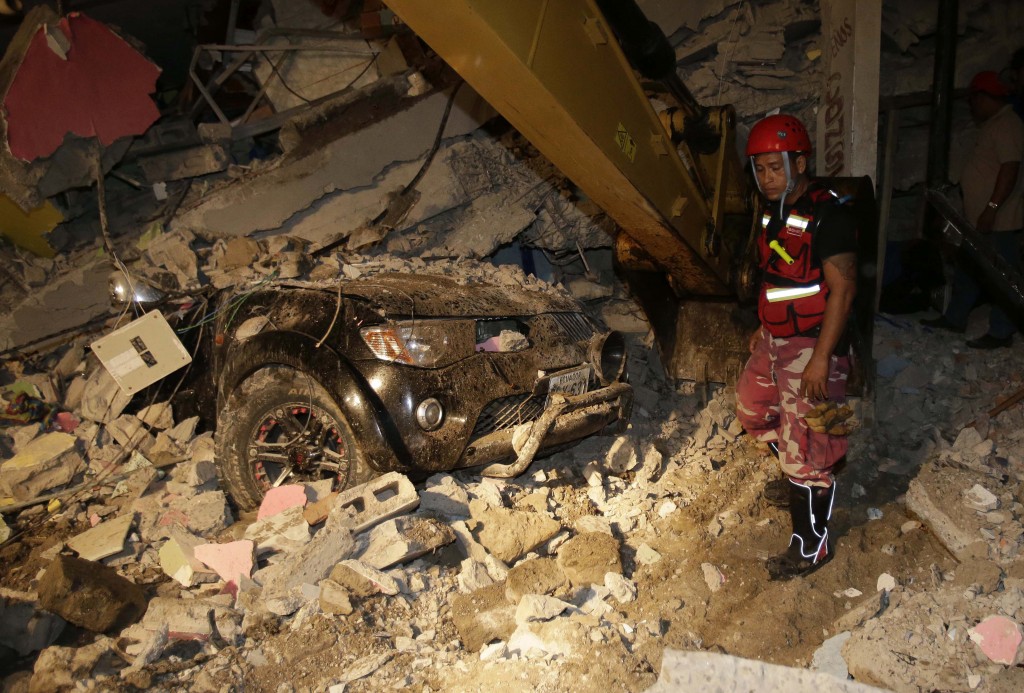 The strongest earthquake to hit Ecuador in decades flattened buildings and buckled highways along its Pacific coast, sending the Andean nation into a state of emergency. At least 233 people were killed, hundreds more injured and the damage stretched for hundreds of miles to the capital and other major cities.

The magnitude-7.8 quake was centered on Ecuador’s sparsely populated fishing ports and tourist beaches, 105 miles, northwest of Quito, the capital.

Vice President Jorge Glas said the quake was the strongest to hit Ecuador since 1979 and accessing the disaster zone was difficult due to landslides.

David Rothery, a professor of planetary geosciences at The Open University, northeast of London, says the total energy released by the magnitude-7.8 quake in Ecuador was “probably about 20 times greater” than the magnitude-7.0 quake in Japan on Friday.

Rothery told The Associated Press on Sunday that bigger quakes last longer, so both the strength of the shaking and the duration contribute to the total energy.

Rothery says the quake in Ecuador began deeper underground than the recent Japan quakes, which would have lessened the shaking on the ground. But the greater loss of life and greater damage in Ecuador can be attributed to the country’s less stringent construction codes.

The scientist also says “there is no causal relationship between the earthquakes in Ecuador and Japan.”

“We’re trying to do the most we can, but there’s almost nothing we can do,” said Gabriel Alcivar, mayor of Pedernales, a town of 40,000 near the quake’s epicenter.

Alcivar pleaded for authorities to send earth-moving machines and emergency rescue workers as dozens of buildings in the town were flattened, trapping residents among the rubble. He said looting had broken out amid the chaos but authorities were too busy trying to save lives to re-establish order.

“This wasn’t just a house that collapsed, it was an entire town,” he said.

President Rafael Correa signed a decree declaring a national emergency and rushed home from a visit to Rome, urging Ecuadoreans to stay strong while authorities handle the disaster.

Ecuador’s Risk Management agency said 10,000 armed forces had been deployed to help. In addition, 3,500 national police were sent to the towns of Manabí, Esmeraldas and Guayas y Santa Elena; 500 firefighters were heading to Manabi and Pedernales and five shelters had been set up for those who had to evacuate their homes.

On social media, photos circulated of homes reduced to rubble, a shopping center’s roof torn apart, supermarket shelves shaking violently and a collapsed highway overpass that crushed a car. In Manta, the airport was closed after the control tower collapsed, injuring an air traffic control worker and a security guard.

In the capital Quito, people fled into the streets in fear as the quake shook their buildings. It knocked out electricity in several neighborhoods and six homes collapsed but after a few hours, power was being restored, Quito’s Mayor Mauricio Rodas said.

“I’m in a state of panic,” said Zoila Villena, one of many Quito residents who congregated in the streets. “My building moved a lot and things fell to the floor. Lots of neighbors were screaming and kids crying.”

Among those killed was the driver of a car crushed by an overpass that buckled in Guayaquil, the country’s most populous city. The city’s international airport was also briefly closed. Hydroelectric dams and oil pipelines in the OPEC-member nation were shut down as a precautionary measure but so far hadn’t reported any damages.

Towns near the epicenter were evacuated as a precautionary measure in case of hazardous tsunami waves but several hours later authorities said was safe for coastal residents to return to their homes.

The USGS originally put the quake at a magnitude of 7.4 then raised it to 7.8. It had a depth of 19 kilometers (12 miles). At least 36 aftershocks followed, one as strong as 6 on the Richter scale, and authorities urged residents to brace for even stronger ones in the coming hours and days.

The quake comes on the heels of two deadly earthquakes across the Pacific, in the southernmost of Japan’s four main islands. A magnitude-6.5 earthquake struck Thursday near Kumamoto, followed by a magnitude-7.3 earthquake just 28 hours later. The quakes have killed 41 people and injured about 1,500, flattened houses and triggered major landslides.