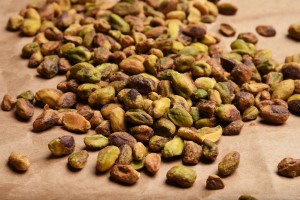 he truck company appeared legitimate, though the paperwork was a bit sloppy. But after a few calls, the broker told Horizon Nut Co. to load 45,000 pounds of shelled pistachios and send it to the East Coast.

Hours later, the trailer was empty in the Los Angeles-Long Beach port area, and about $450,000 worth of nuts had vanished into the shady market for stolen cargo.

The heist in November was one of 31 reported last year in California’s sprawling Central Valley, a rural crime wave that has caught California’s lucrative nut industry off guard.

“We basically handed the load over to the driver,” said Kirk Squire, grower relations manager for the company. “It wasn’t a robbery. It was a legitimate pickup by a fictitious trucking company. It’s fraud. There was no violence; there was nothing.”

On Thursday, about 150 farmers, processors and shippers crowded into a convention center in Modesto vowing to stop the thieves this year. It was the second emergency summit in just five months. The first one, in December, apparently wasn’t sufficient to prevent at least three more heists from companies that attended.

Authorities just found out Thursday morning about another 30,000-pound load of almonds that didn’t show up at the right destination. It was taken last week from a processor — even though authorities have beefed up their efforts and everyone is on high alert.

Nothing prepared the valley for the high-tech nut bandits, an organized network that has hacked databases, falsified documents and duped packers out of as much as $9 million last year, according to law-enforcement authorities and insurers.

The vast majority of the nut thefts were sophisticated frauds, rather than break-ins of unattended trailers, said Scott Cornell, a specialist in the transportation division of Travelers Insurance, one of the top insurers of freight nationwide. A common ruse is to use a false company to hire a legitimate trucker, then tell the trucker to divert the load to another warehouse, where he is paid and sent on his way.

“The reason they hire a legitimate trucking company is that company is going to have nothing to hide when they go for the pickup,” Cornell said. “All their information is going to be legitimate. … They have no idea they’re participating in a theft. They just think they’ve been hired to pick up the load.”

Thieves probably followed the market, eschewing electronic luxury goods after the economy tanked in 2008, Cornell said. Then they liked what they found and never shifted back, he says.

Agricultural crime is not new to the region, where the Sheriff’s Departments of most of the major farm counties have officers dedicated to things pilfered from the nearly 7 million acres of nuts, fruit, grains and vegetables that generate about $17 billion in revenue. Over the years, thieves have stolen equipment, fuel, irrigation pipe, copper wire and even bees.

But for several years running, food and beverage has surpassed electronics as the top category for cargo crimes, according to CargoNet, a division of crime-analytics company Verisk. (That trend was also noted by a similar industry monitor, FreightWatch, which said food and beverages began to dominate electronics in 2010.)

California Assemblywoman Kristin Olsen said she has introduced legislation that would allow counties in the Central Valley to create an agriculture-cargo-crime task force that crosses jurisdictions.

“In the LA County area, there are massive operations with large warehouses of stolen nuts,” said Olsen, who first heard of the thefts from a local grower in her district. “The products are bound for other states and other nations.”

She said that the growers typically have no idea that they’re being victimized, because truck drivers present real credentials.

The task force proposed by her legislation, AB2805, would be modeled after similar efforts that tackled a rash of metal thefts.

“We have to do something about these thefts because it has hurt our economy and (is) funding organized crime,” she said. “Last year alone, we saw $18.7 million lost-cargo thefts in California.”

Richard Hudson, senior deputy for Kern County’s rural crimes unit, said one suspect fled to Moscow after being linked to three thefts in a 36-hour period in 2014 — one of nuts in Kern county and two electronic thefts in Los Angeles.

“He’s gone; I have no idea where he is. We have a felony warrant out on him,” Hudson said.

Since then, major processors such as Paramount Farms — now known as Wonderful — have tightened security, which has “drastically” cut the number of Kern County heists down to one in the last six to eight months.

But Cornell said the criminals are adapting quickly, and hacking into Department of Transportation documents to steal identities.

“This is a marathon; not a sprint,” he warned. Even after an arrest, “they’ll be back.”