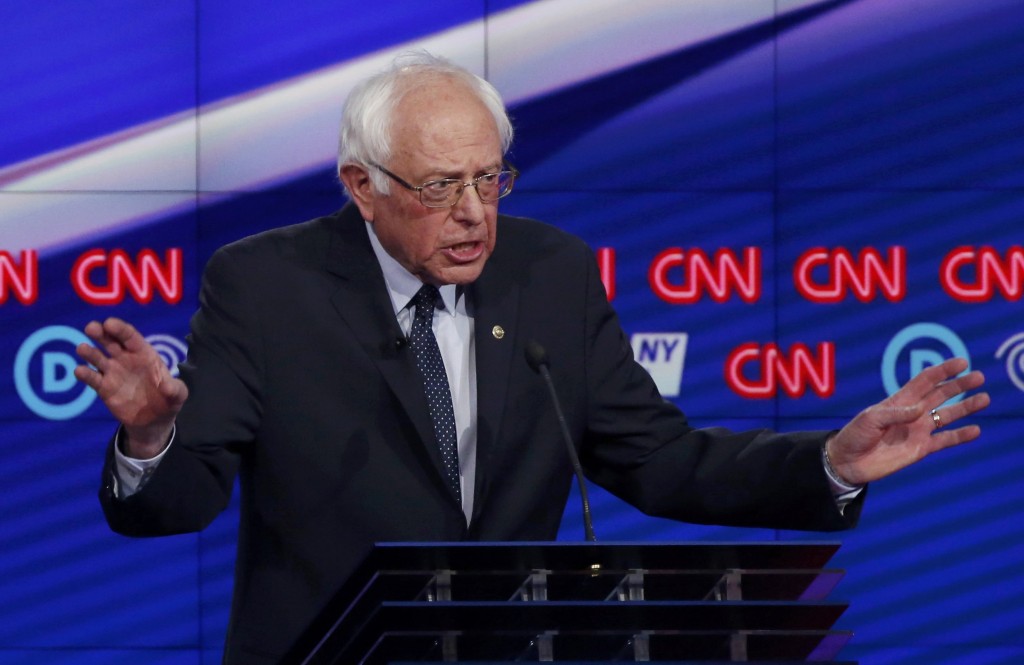 Clinton and Sanders attacked each other over Wall Street, gun control and other issues on Thursday in a series of exchanges that laid bare the mounting pressures on them both but seemed unlikely to change the dynamics of the race.

While far short of the brawls that have characterized Republican debates, the tone reflected a contentious turn in the Democratic contest. Clinton and Sanders out-shouted each other while a split crowd roared its approval.

“If you’re both screaming at each other, the viewers won’t be able to hear either of you,” moderator Wolf Blitzer of CNN warned during the debate at the historic Navy Yard in the New York borough of Brooklyn.

Sanders, 74, will take a quick break from the campaign trail on Friday to fly to the Vatican, where he will give a brief speech at a conference on the world economy and social justice. Sanders, who will be back in New York to campaign on Sunday, has said the trip is not a political appeal for the Catholic vote.

At a Manhattan hotel across the East River, Republican front-runner Donald Trump, 69, spoke at a party fundraiser while his rivals voiced fears of a disaster in the Nov. 8 presidential election unless they got the nomination.

As protesters chanted outside and waved signs, Trump aligned himself with what he said were the “New York values” of hard work and compassion. Rival Ted Cruz, a senator from Texas, charged in a debate earlier this year that Trump’s version of New York values were basically Democratic positions.

Cruz, 45, pointed to opinion polls showing the New York billionaire losing badly to Clinton and getting far less support from women and minority voters. The other Republican candidate, Ohio Governor John Kasich, 63, said Republican candidates for Congress would be at risk if the candidate topping the ballot was negative.

Both Trump and Clinton, who represented New York in the Senate, have big leads in state polls heading into Tuesday’s New York contest. Trump needs a win to further his drive toward the 1,237 delegates needed for the nomination, and avoid a contested July convention that could sow Republican chaos.

Clinton needs a New York win to stop a recent streak of seven victories in the last eight contests by Sanders, and expand her commanding lead in pledged delegates to her party’s nominating convention, also in July.

Clinton leads Sanders by 251 bound delegates to the July Democratic convention, where 2,383 delegates will be needed for the nomination. Her lead balloons to almost 700 when the support of superdelegates – party leaders who are free to back any candidate – are added.

Sanders, who had questioned the former secretary of state’s qualifications to be president, conceded during the debate she was qualified but said she had shown poor judgment by taking money from Wall Street for speeches, by voting as a senator to back the 2003 Iraq invasion and by supporting free trade deals.

Clinton, 68, responded the charges were also an attack on President Barack Obama, who as a candidate raised money on Wall Street and utilized Super PACS, outside funding groups that can raise unlimited sums of money, but still fought for tough regulations on the financial services industry.

“This is a phony attack that is designed to raise questions when there is no evidence or support,” she said.

Pressed on what Clinton had done to show she was influenced by the money she had raised on Wall Street or her speaking fees, Sanders said she was too busy giving speeches to Goldman Sachs to break up the big banks.

“He cannot come up with any example because there is no example,” Clinton replied. “I stood up to the behavior of the banks when I was a senator.”

Sanders responded sarcastically: “Secretary Clinton called them out – oh, they must be really crushed by this.”

Clinton, who has repeatedly attacked Sanders for his vote in Congress for a bill that protected gun manufacturers from being sued over the criminal use of their products, confronted him when he laughed as she discussed her accusations.

“It’s not a laughing matter,” she said.