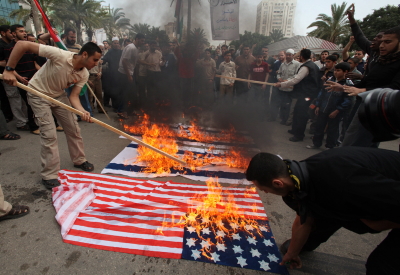 Three IDF soldiers are being punished – with one sent to the brig for 20 days – for burning a Palestinian flag. The IDF said that the soldiers acted “against orders” and “in a manner that does not represent the spirit of the IDF.”

Once, the Palestinian flag – originally the Palestine Liberation Organization’s standard – was illegal, but after the Oslo Accords were signed in 1993 it was adopted by the Palestinian Authority, despite the discomfort many Israelis still feel when they see it because of its association with terrorism. Nevertheless, the IDF has decided that such acts are not appropriate for soldiers, and in this case implemented punishments usually reserved for disobeying orders and other in-army offenses.

According to an army investigation, the soldiers on Wednesday morning confiscated the flag when they inspected a car at a checkpoint near the village of Awarta in central Shomron. They then burned the flag and tossed its ashes into a bush on the side of the road.

Meanwhile, the soldier who shot at a terrorist when he was neutralized and on the ground after soldiers shot him when he tried to stab them in Chevron on Purim morning is still confined to base, with military prosecutors still unable to decide their next move. Formal charges have still not been filed against the soldier over three weeks after the incident, although the IDF prosecutor has decided not to charge the soldier with murder, as he had originally planned.

Reports Thursday morning said that the prosecutors would probably draw up an indictment next week, and demand that the soldier serve several years in prison. According to the reports, the soldier’s attorneys are attempting to work out a plea deal to either reduce the charges even further, or to ensure that he will not be required to serve time.