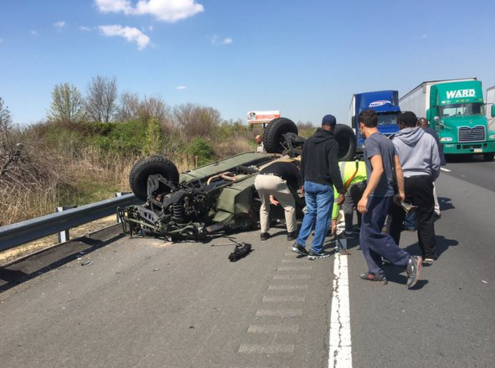 At least four military personnel were injured when their Humvee lost a wheel and overturned on the New Jersey Turnpike.

The accident happened at about 2:30 p.m. Thursday on the southbound side of the Turnpike, around mile marker 75, in Brunswick Township.

Michael Watsey, a witness to the accident, tweeted that a number of motorists tried lifting the overturned Humvee to save trapped soldiers, but were unable to. Eventually, rescue personnel arrived. At least one of those injured was evacuated by helicopter.

According to Watsey, a female soldier’s leg was amputated in the accident.

The southbound lanes were closed for about two hours after the accident, but at around 4;25 p.m., New Jersey State Police tweeted, “southbound car lanes and left-most truck lane now open.”