Politics Entire 2016 Field Descends on NYC Ahead of Primary
Politics 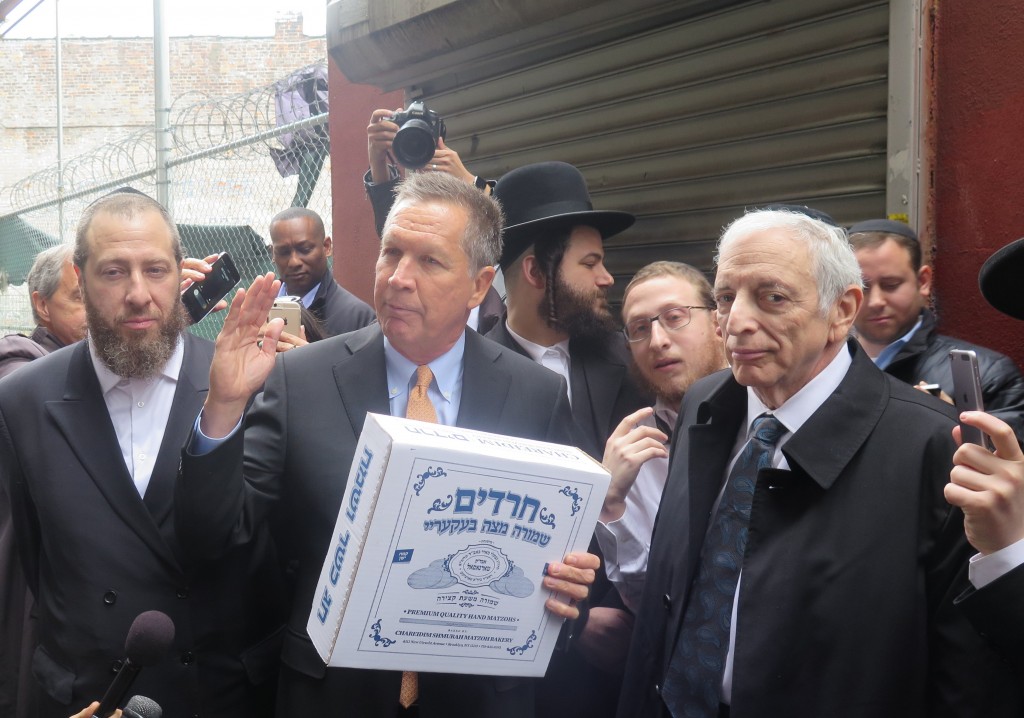 New York’s matzah factories and diners will take a backseat to the debate stage and talk show circuit as the entire presidential field — two Democrats and three Republicans — descends on the nation’s largest city.

Hillary Clinton and Bernie Sanders will hold their first debate in more than a month, a showdown Thursday in Brooklyn that comes at a tense moment in the Democratic primary.

Republicans Donald Trump, Ted Cruz and John Kasich will each speak at a state GOP gala before the latter two candidates appear on late-night shows.

While the White House hopefuls have been blanketing New York State for several days, holding rallies and mingling at local hangouts, Thursday’s events are among the last high-profile opportunities they’ll have to reach voters.

Front-runners Clinton and Trump hope the state can propel them past stubborn challengers and into the general election. Preference polls show Clinton and Trump leading their respective contests heading into Tuesday’s primary, an edge New York billionaire John Catsimatidis attributes to their local ties.

“I favor them both, as New Yorkers,” said Catsimatidis, a grocery chain owner who hosts a weekly radio show.

Clinton spent eight years as a New York senator. Trump is a Queens native, built his fortune in New York’s real estate market and lives in an opulent Manhattan high-rise bearing his name.

Sanders, a Vermont senator who was born in Brooklyn, has also been touting his local roots as he seeks to upset Clinton in New York. While Sanders is on a winning streak in primaries and caucuses, he desperately needs a big victory in New York if he hopes to cut into Clinton’s delegate lead and slow her march to the nomination.

The Democratic race has become increasingly heated in New York – including Sanders first questioning Clinton’s qualifications to be president, and then reversing himself – and the tensions could spill over onto the debate stage. Even getting Clinton and Sanders to agree on the date and location for the debate was a herculean task, underscoring the discord between the rivals.

Trump hopes New York marks an end to the worst period of his candidacy, a stretch that raised new questions about his policy chops and revealed his campaign’s lack of preparedness for a potential delegate fight if the GOP race heads to a contested convention. A big victory in New York could preserve his ability to clinch the nomination before the convention.

Cruz has been cutting into Trump’s delegate lead and working feverishly to court the delegates who would determine the race at the July convention.

But New York hasn’t been friendly territory for the Texas senator. Even as he’s tried to embrace East Coast culture, including baking matzah with children in an Orthodox Jewish neighborhood in Brooklyn, he’s been dogged by his earlier criticism of Trump’s “New York values” and had to cancel an event at a school because students threatened to walk out.

Seeking to lower expectations, Cruz said Wednesday that if Trump doesn’t get more than 50 percent of the vote in his home state, “that’s widely going to be seen as a crushing loss.”

Still, Cruz is looking for opportunities to pick off some delegates both upstate and in the Bronx and Brooklyn.

Kasich, the Ohio governor who has stayed in the race despite only winning his home state thus far, also sees areas where he could pick up delegates in New York. Kasich is eyeing congressional districts in the Albany and Syracuse areas, where he’s arguing that he’s the only Republican left in the race who could defeat Clinton in a fall campaign.