Politics Home in NY, Trump Aims for A Rout But Faces Questions
Politics 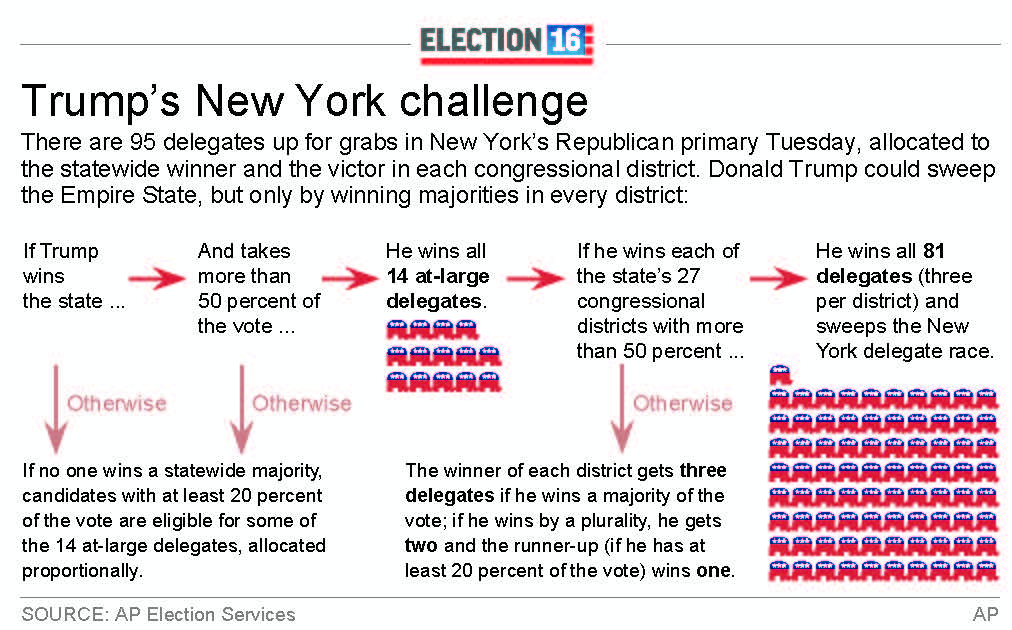 After several difficult weeks that have called into question his front-runner standing, Donald Trump has arrived in friendlier territory: his home state of New York.

Polls show Trump with a commanding lead in a state that is likely to play a major role in determining whether the billionaire businessman can clinch the Republican presidential nomination before this summer’s national convention. And his team has been touting a campaign reboot, including a new laser focus on racking up delegates.

On Wednesday, they announced that campaign veteran Rick Wiley would be joining the team as national political director. And Trump appeared to take a step toward thawing the chilly standoff with Fox News Channel’s Megyn Kelly, meeting with her at Trump Tower.

But Trump is also facing a strong challenge from rivals who are working strategically to deny Trump delegates anywhere they can. And he does not appear to be doing all he can, despite the high stakes of the contest.

New York uses a complicated electoral system in which a candidate must win an overall majority of votes statewide as well as in each of the state’s congressional districts to walk away with all of its 95 delegates. That means that votes in GOP deserts like Brooklyn and the Bronx are arguably even more valuable than in Republican-rich counties.

The Trump campaign has made some curious decisions. It chose not to bring in a specialized paid state director and the candidate has scaled back his public schedule, holding just four rallies to date. He has not stormed local news shows or editorial boards and has yet to air any commercials. His rivals, Texas Sen. Ted Cruz and Ohio Gov. John Kasich, have also largely forgone broadcast ads.

And Trump has several key advantages. In addition to being a near-lifelong resident and the developer of properties across the state, he has been endorsed by party leaders in all of the state’s 27 congressional districts.

But Trump’s rivals have been eying openings.

Kasich, for instance, has six paid staffers and is focusing on picking up delegates in targeted districts.

Cruz has spent less time in the state, focusing on peeling away delegates both upstate and in the Bronx and Brooklyn.

The senator’s best-case scenario is to win about 35 of the state’s 95 delegates, said Russ Gugino, a longtime Republican strategist who is volunteering for his campaign.

“Any delegates he picks up is gravy at this point,” Gugino said.