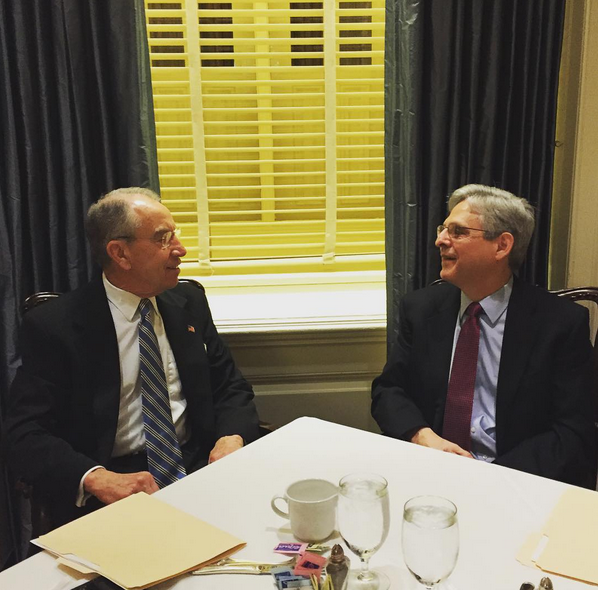 The man standing between Supreme Court nominee Merrick Garland and a Senate hearing on his confirmation said Tuesday that an hourlong meeting with Garland had done nothing to change his mind.

Sen. Charles E. Grassley, R-Iowa, the Judiciary Committee chairman, hosted Garland for breakfast in the private Senate Dining Room in what was the most anticipated meeting yet between a GOP senator and President Obama’s choice for the high court.

Garland kept silent upon leaving, as is customary for Supreme Court nominees, and Grassley left through a back door without speaking to reporters. His office later issued a statement calling the meeting “cordial and pleasant” but one that did not change Grassley’s determination not to act.

“As he indicated last week, Grassley explained why the Senate won’t be moving forward during this hyper-partisan election year” and “thanked Judge Garland for his service,” read the statement. The only publicly released photo of the meeting came via Grassley’s Instagram account.

“Had pleasant bfast w Judge Garland this morning. Explained why the Senate won’t be moving fwd w his nomination. Next prez will decide after the ppl have a voice.”

The meeting and its predictable outcome highlighted the risks and the limits of what White House officials have described as a “play it straight” strategy — to treat Garland’s confirmation process in the most typical way despite the atypical circumstances.

As the gatekeeper to further Senate action on Garland’s nomination, Grassley has acted in lockstep with Senate Majority Leader Mitch McConnell, R-Ky., who has vowed to leave the vacancy created by Justice Antonin Scalia’s February death to be filled by the next president.

That decision, the former Bar Association presidents wrote in a Monday letter, “injects a degree of politics into the judicial branch that materially hampers the effective operation of our nation’s highest court and the lower courts over which it presides.” The signers represent 15 of the past 24 presidents of the ABA, which plays a formal role in the Supreme Court confirmation process by rating nominees’ qualifications.

While the ABA has not made a formal assessment of Garland, the former presidents noted that “Democrats and Republicans alike have noted Chief Judge Garland’s sterling credentials.”

“The President has fulfilled his constitutional duty, and it is time for the members of the United States Senate to fulfill theirs by holding a fair hearing and timely vote for the President’s nominee,” they said.

William Neukom, who served as ABA president in 2007 and 2008, told reporters in a conference call arranged by the White House that blockade of Garland’s nomination is “frankly appalling.”

“This is a very unseemly instance of one branch of a three-branch government hobbling a second branch, the judiciary,” he said. “How dare one branch under-resource a second branch and keep it from doing its job.”

Another ex-president — Dennis Archer, the former Detroit mayor — said he expected everyday Americans to take a more active role in the protesting of the blockade, to the point that they might influence the coming election: “I think it’s going to be much more, if it gets stretched out, that will take place.”

The White House and Senate Democrats have continued to follow a confirmation game plan aimed at keeping pressure on Republican senators who are up for reelection this year.

Garland met with three of them Tuesday. After finishing breakfast with Grassley, he returned to the Senate Dining Room to meet with Sen. Lisa Murkowski, R-Alaska. In the afternoon, he met with Sen. Pat Toomey, R-Pa.

Obama spokesman Eric Schultz declined to detail what was discussed at the meetings Tuesday, but said that Garland “has enjoyed this process.”

“He finds these conversations to be instructive and helpful and thoughtful and very substantive,” he said.

Those three senators all say they will continue to hold fast against Garland, and they have backing from a vocal and well-funded group of conservative activists who fear the impact he could have on the high court in replacing a stalwart conservative like Scalia.

Carrie Severino, chief counsel and policy director of the Judicial Crisis Network, thanked Grassley for his stance after the meeting: “Senator Grassley understands that Merrick Garland will be the decisive fifth vote on the Court to gut the Second Amendment right to keep and bear arms and the fifth vote to defer to unaccountable bureaucrats at federal agencies like the EPA.”

But Senate Minority Leader Harry Reid, D-Nev., continued hammering away at Grassley’s refusal to take up Garland’s nomination, calling him out in a Senate floor speech for holding their breakfast “in private, far away from the public eye.”