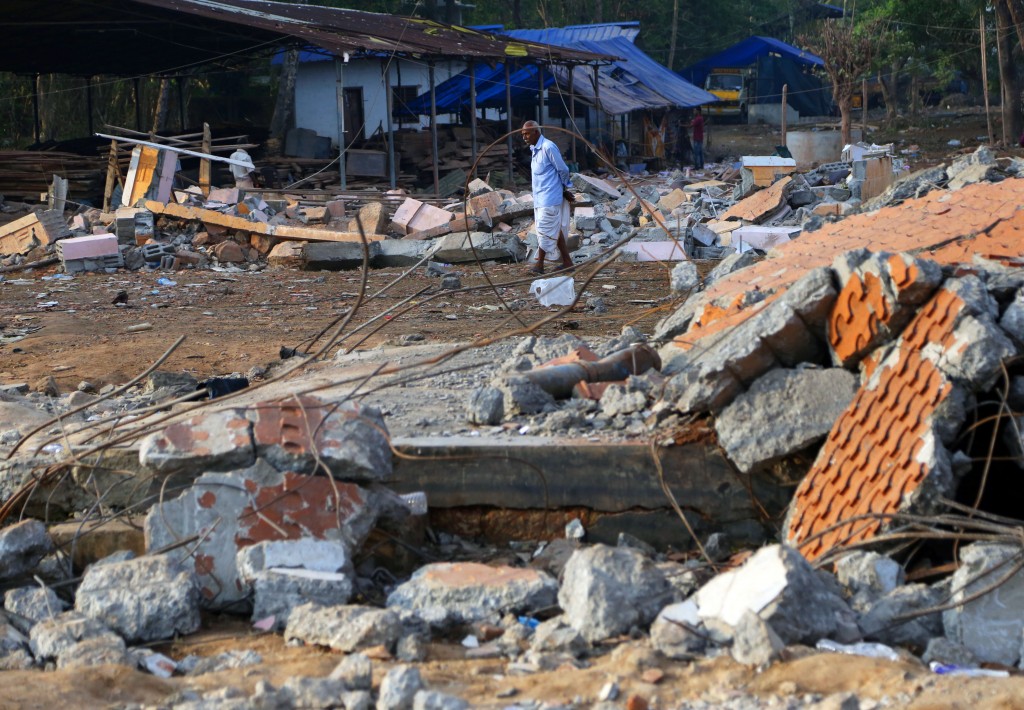 Medical teams on Monday tended to hundreds of people injured in a massive fire that killed at least 110 people, while authorities searched for those responsible for illegally putting on the fireworks display that caused the weekend blaze in southern India.

Amid the burnt out wreckage of the complex in the village of Paravoor rescue officials sifted through huge piles of dust, wood and concrete for clues about how an unauthorized pyrotechnic display staged before dawn on Sunday went so horribly wrong, sparking a fire that swept through a building packed with thousands for a religious event.

Police detained five workers for questioning about fireworks stored at the site, hoping to learn more about who owned the fireworks and who had contracted the pyrotechnical display, police constable R. Unnikrishnan Nair said. The five were later released, but Nair did not say if they were able to help authorities track down any of the 15 Board members who fled after the accident.

As of Monday morning, the death toll from the tragedy stood at 110  with more than 380 others hurt, including many with burn injuries and others injured when a building storing fireworks collapsed.

Villagers and police had pulled many of the injured out from under slabs of concrete and twisted steel girders. They were taken to hospitals in the state capital of Thiruvananthapuram, about 60 kilometers (37 miles) south of Paravoor, as well as to the nearby city of Kollam.

The fire started when a spark from a fireworks display ignited a stash of fireworks that had been stored at the complex. Scores ran in panic as the massive initial blast cut off power in the complex. Flames trapped many devotees inside the compound. More explosions sent flames and debris raining down, with some chunks of concrete falling as far as 1 kilometer (a half-mile) away, a witness said.

Most of the 110 deaths occurred when the building where the fireworks were stored collapsed, a witness told reporters. Most of the bodies have been identified, officials said, though there were still at least 11 unknown victims charred beyond recognition.

Police were investigating the missing Board members for possible charges of culpable homicide, punishable with life imprisonment, and illegally storing a cache of explosives.