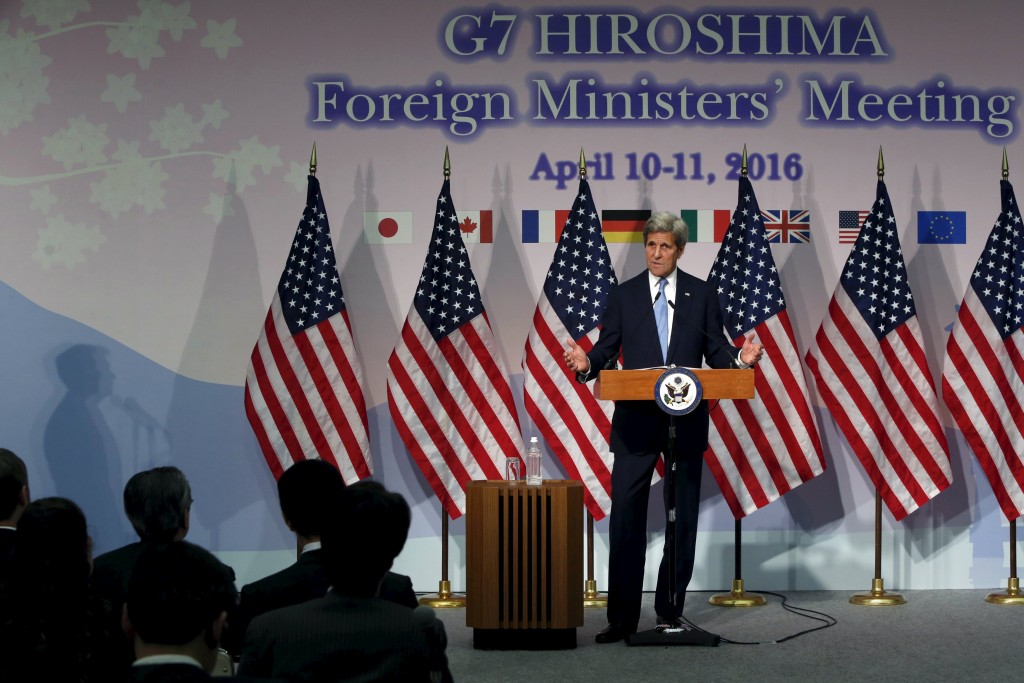 U.S. Secretary of State John Kerry on Monday called his visit to a memorial to victims of 1945 U.S. nuclear attack on Hiroshima “gut-wrenching” and said everyone, including U.S. President Barack Obama, should come.

The first U.S. secretary of state to visit Hiroshima, Kerry said Obama also wanted to travel to the city in southern Japan but he did not know whether the leader’s complex schedule would allow him to do so when he visits the country for a Group of Seven (G7) summit in May.

Kerry toured the Hiroshima Peace Memorial and Museum, whose haunting displays include photographs of badly burned victims, the tattered and stained clothes they wore and statues depicting them with flesh melting from their limbs.

“It is a stunning display. It is a gut-wrenching display,” he said.

“It is a reminder of the depth of the obligation everyone of us in public life carries … to create and pursue a world free from nuclear weapons,” he told a news conference.

After the tour by Kerry and his fellow G7 foreign ministers, the group issued a statement reaffirming their commitment to building a world without nuclear arms but said the push had been made more complex by North Korea’s repeated “provocations” and by worsening security in Syria and Ukraine.

The ministers from Britain, Canada, France, Germany, Italy, Japan and the United States laid white wreaths at a cenotaph to the victims of the Aug. 6, 1945, bombing, which reduced the city to ashes and killed some 140,000 people by the end of that year.

While he is not the highest-ranking U.S. official to have toured the museum and memorial park, a distinction that belongs to then-U.S. Speaker of the House of Representatives Nancy Pelosi in 2008, Kerry is the most senior executive branch official to visit.

”Everyone in the world should see and feel the power of this memorial. It is a stark, harsh, compelling reminder not only of our obligation to end the threat of nuclear weapons, but to rededicate all our effort to avoid war itself,” the chief U.S. diplomat wrote in a guest book.

Asked later if this meant Obama should come, Kerry said: “everyone means everyone. So I hope one day the president of the United States will be among the everyone who is able to come here. Whether or not he can come as president, I don’t know.”

At Kerry’s suggestion, the ministers also made an impromptu visit to the Atomic Bomb Dome, the skeletal remains of the only structure left standing near the hypocentre of the bomb explosion and now a UNESCO World Heritage site.

Three days after a U.S. warplane dropped a nuclear bomb on Hiroshima, another atomic bomb was dropped on Nagasaki, on Aug. 9, 1945. Japan surrendered six days later.

A visit by Obama could be controversial in America if it were viewed as an apology. A majority of Americans view the bombings as justified to end the war and save U.S. lives, while the vast majority of Japanese believe it was not justified.

Hopes for Obama’s visit to Hiroshima were raised after an April 2009 speech in Prague when he called for a world without nuclear weapons. He later said that he would be honored to visit the two nuclear-attacked cities.

The G7 foreign ministers’ trip to the museum and memorial is part of Japan’s effort to send a strong nuclear disarmament message from Hiroshima, the world’s first city to suffer atomic bombing.

“I think this first-ever visit by G7 foreign ministers to the peace memorial park is a historic first step towards reviving momentum toward a world without nuclear weapons,” Japanese Foreign Minister Fumio Kishida said in a statement.

And in a statement on maritime security, they voiced their strong opposition to provocative attempts to change the status quo in the East and South China Seas, an apparent reference to China, which is locked in territorial disputes with other nations including the Philippines, Vietnam and Japan.