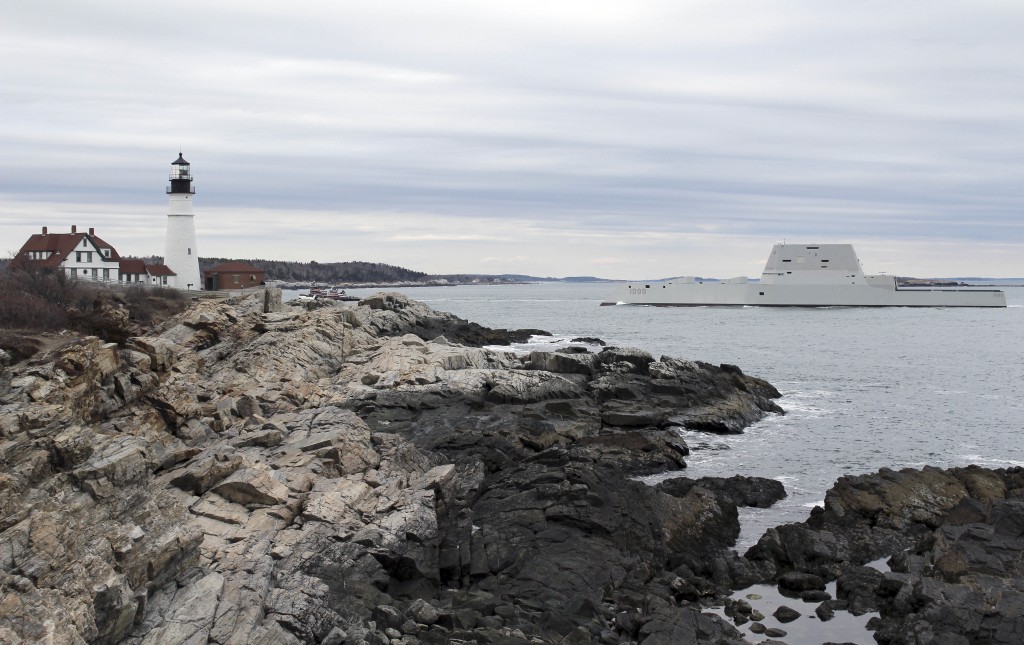 The future U.S.S. Zumwalt is so stealthy that it’ll go to sea with reflective material that can be hoisted to make it more visible to other ships.

The Navy destroyer is designed to look like a much smaller vessel on radar, and it lived up to its billing during recent builder trials.

Lawrence Pye, a lobsterman, told The Associated Press that on his radar screen the 610-foot ship looked like a 40- to 50-foot fishing boat. He watched as the behemoth came within a half-mile while returning to shipbuilder Bath Iron Works.

“It’s pretty mammoth when it’s that close to you,” Pye said.

Despite its size, the warship is 50 times harder to detect than current destroyers thanks to its angular shape and other design features, and its stealth could improve even more once testing equipment is removed, said Capt. James Downey, program manager.

During sea trials last month, the Navy tested Zumwalt’s radar signature with and without reflective material hoisted on its halyard, he said. The goal was to get a better idea of exactly how stealthy the ship really is, Downey said from Washington, D.C.

The reflectors, which look like metal cylinders, have been used on other warships and will be standard issue on the Zumwalt and two sister ships for times when stealth becomes a liability and they want to be visible on radar, like times of fog or heavy ship traffic, he said.

The possibility of a collision is remote. The Zumwalt has sophisticated radar to detect vessels from miles away, allowing plenty of time for evasive action.

But there is a concern that civilian mariners might not see it during bad weather or at night, and the reflective material could save them from being startled.

The destroyer is unlike anything ever built for the Navy.

More tests will be conducted when the ship returns to sea later this month for final trials before being delivered to the Navy. The warship is due to be commissioned in October in Baltimore, and will undergo more testing before becoming fully operational in 2018.