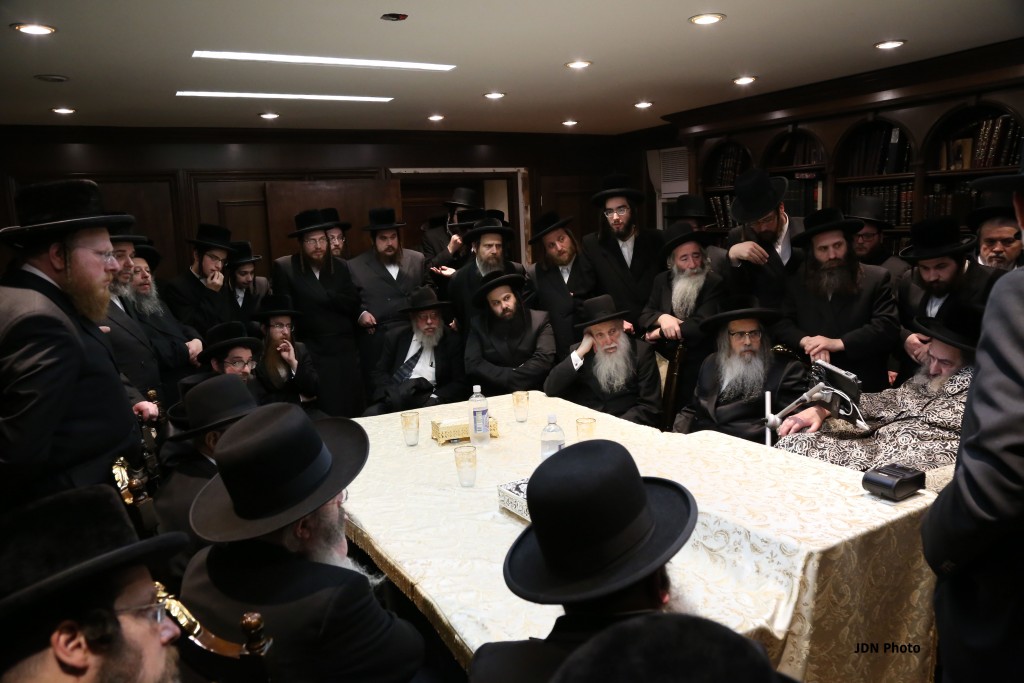 Leading Rebbes, Roshei Yeshivah, and Rabbanim gathered in Williamsburg on Thursday night to discuss the worsening crisis regarding the chinuch of the thousands of children whose families have either recently emigrated from France to Eretz Yisrael, or are making plans to do so. It took place at the home of the Kalover Rebbe, shlita, who had called the meeting.

Harav Berel Taub, son of the Kalover Rebbe, shlita, who had just returned from a trip to France, addressed the assembled on his father’s behalf, relating his father’s close connection to French Jewry as well details of the current crisis. He stressed that based on first hand accounts and research by the Kalover office staff in Eretz Yisrael, hundreds of children who learned in Torah mosdos in France are now enrolled in secular schools in Israel.

Rav Taub described how the Jewish agency is doing all it can to convince French Jews to make aliyah, and then encourage them to send their children to nonreligous schools. He painfully described how many children who in France attended the Otzar HaTorah network are now in secular or mixed schools.

He related that on his recent visit, a mother told him that with her family planning to make aliyah in the near future, she sent her son to Eretz Yisrael ahead of the other family members. Weeping, the mother revealed that she has already seen a dramatic deterioration in his spiritual well-being.

Rabbi Yossi Milstein of the American office of Chinuch Atzmai filled in various pertinent details, of the number of children who have entered mosdos such as Chinuch Atzmai and Shuvu, and what the various options are.

“Last year, we saved 500 children but we lost a thousand others. Now, in the next few weeks the registration for the next year will take place. If sufficient funds will be raised, we will be able to save at least the same amount as last year. We have to build new classrooms, purchase caravans to make this possible.”

Rebbes and Roshei Yeshivah present asked various questions of Rabbi Milstein as well as of the askanim of Kalov who were at the meeting. Among the issues discussed was the role of Rabbanim in France, the need to establish a special organization in Eretz Yisrael, as well as a committee of local Rabbanim to help ensure that the French children attend Torah schools.

The Gedolim concluded that it is imperative that an intensive fund-raising campaign be launched immediately to raise the needed funds, and on the spot signed a Kol Korei stating the vital importance of this crucial cause of saving the spiritual lives and futures of so many Jewish children.

Last summer, in an exclusive conversation with Hamodia’s Inyan magazine, the Rebbe, who suffers from a severe form of ALS and primarily communicates via a special computer program named EZgaze, spoke passionately about the urgent need to act.

“They are trying to get away from the physical danger of anti-Semitism, but they are actually now in a greater sakanah, a spiritual danger. We must rescue them from this greater danger!” the Rebbe emphasized at the time.