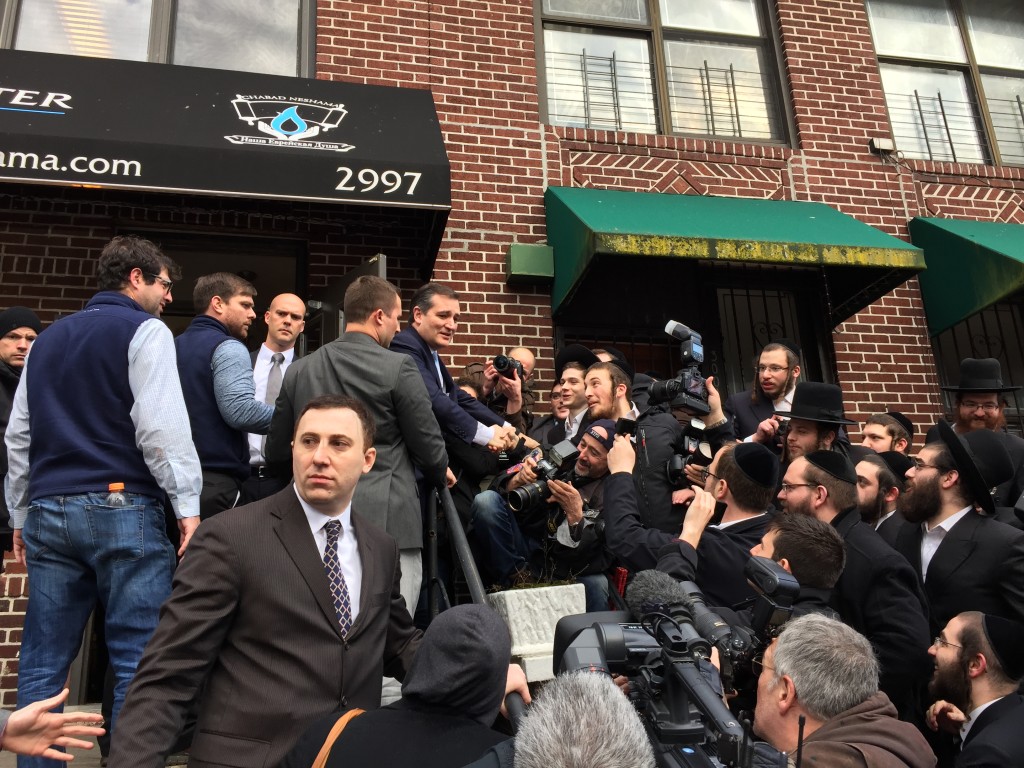 Cruz’s use of that phrase as a putdown in a GOP debate in January has hung around his neck like an anchor, particularly in New York City, where’s he’s been skewered in the tabloids and repeatedly heckled at campaign events.

But Cruz is forging forward in his quest to pick up delegates, insisting that he wasn’t criticizing the state as a whole, only the policies often synonymous with New York.

“They are the values of the liberal Democratic politicians like Andrew Cuomo, like Anthony Weiner, like Elliot Spitzer, like Charlie Rangel — all of whom Donald Trump has supported,” Cruz said during a campaign stop in the Bronx. “If you want to know what liberal democratic values are, follow Donald Trump’s checkbook.”

Fewer than 100 people showed up at the event at a restaurant, and several of them were there solely to jeer Cruz. A planned school visit nearby was canceled after several students threatened to walk out.

Mayor Bill de Blasio noted Cruz’s fundraisers in New York, which is home to many rich Republican donors, are ripping the candidate because “he wants New York’s money, but he’s happy to put down the people of New York when he thinks it’s politically convenient.”

The imbroglio over the now infamous phrase began at a Republican debate in South Carolina when Cruz attempted to undermine Trump’s conservative bona fides by attacking his “New York values.”

“Everyone understands that the values in New York City are socially liberal…,” Cruz said then. “Not a lot of conservatives come out of Manhattan.”

The moment — which immediately provided fodder for late night comics and social media — triggered a stirring defense of New York from Trump, who returned to it during the kickoff of his own primary campaign in the state.

“I’ve got this guy standing over there talking about New York values with scorn on his face, with hatred of New York,” Trump said Wednesday at a Long Island rally.

Trump then suggested that Cruz’s criticism of New York was an implicit questioning of the heroism of the city’s police and fire departments during the Sept. 11, 2001, terrorist attacks.

Polls have Trump up huge in his native state, which votes April 19, but Cruz isn’t punting New York, instead hoping to take advantage of the state’s rules to pick up scattered delegates across the state. In any congressional district in which a candidate doesn’t win 50 percent of the vote, the winner gets two delegates while the second-place finisher gets one.

And while the controversy will surely harm Cruz in liberal New York City, it may not hurt in the far more conservative small towns and rural areas upstate.

Cruz didn’t address the ongoing “New York values” flap during an Albany-area campaign event Thursday. But the third Republican still in the race, Ohio Gov. John Kasich, put his own spin on the famed phrase.

“We love New York values,” Kasich, who is running a distant third in the delegate race, said during a campaign stop at a Bronx deli. “It means innovation, neighborhoods, great food, great people. It means everything.”