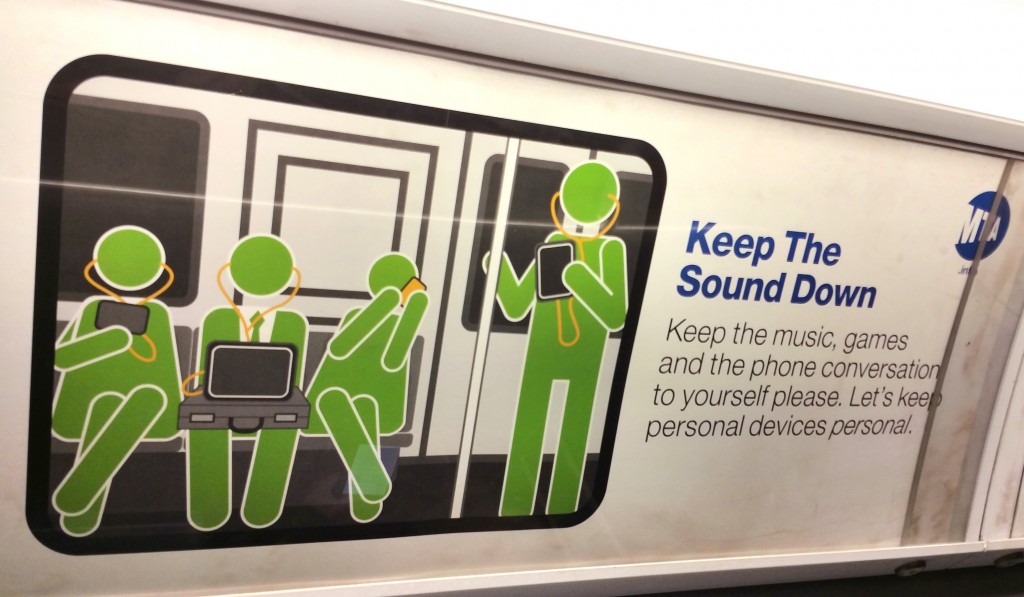 Seat-hogging, loud music and eating are some of the many inconsiderate behaviors that have been the bane of commuters at least as far back as the 1940s in transit systems across the globe.

Subway etiquette is now the subject of a new exhibit in New York City featuring recent and vintage campaign courtesy posters from metro systems around the world, from New York to Tokyo.

“Transit Etiquette or: How I Learned to Stop Spitting and Step Aside in 25 Languages” is on view at the New York Transit Museum’s gallery annex in Grand Central Terminal.

The posters address just about every bad behavior commuters inflict and endure on crowded trains, from spitting, littering and eating to blocking the door and talking on a cellphone.

“All of these topics transcend time, place and culture,” said museum registrar Todd Gilbert. “It’s interesting to see the different ways that graphics and humor and those universal languages are employed to get people to behave themselves.”

The exhibition gives special space to posters from the 1940s, ’50s and ’60s created by artist Amelia Opdyke Jones for a New York City posters series that promoted courtesy on public transportation.

In one, dating from the years after World War II, she depicts a cartoon of a large man sitting between two passengers, who look on with dagger eyes. The caption: “Don’t Be a Seat-Hog.”

Other missives include: “Don’t Be a Pole Hog” and “Clipping? Primping? Everybody wants to look their best, but it’s a subway car, not a restroom.”

A few posters seemed dated. Museum-goer Barbara Hemmendinger, a native New Yorker who lives in Pennsylvania, said she doubted commuters would know the meaning of “expectorate,” a word used in a 1940s poster about not spitting in the subway.

“You don’t see signs about spitting anymore,” noted the retired clinical social worker, “because tuberculosis is essentially controlled and that’s what it was about back in the day.”

“What’s interesting about the posters, too, is that typically they’re done with humor,” said Gilbert. “They’re always trying to be light and appealing to people’s sense of humor and good nature.”