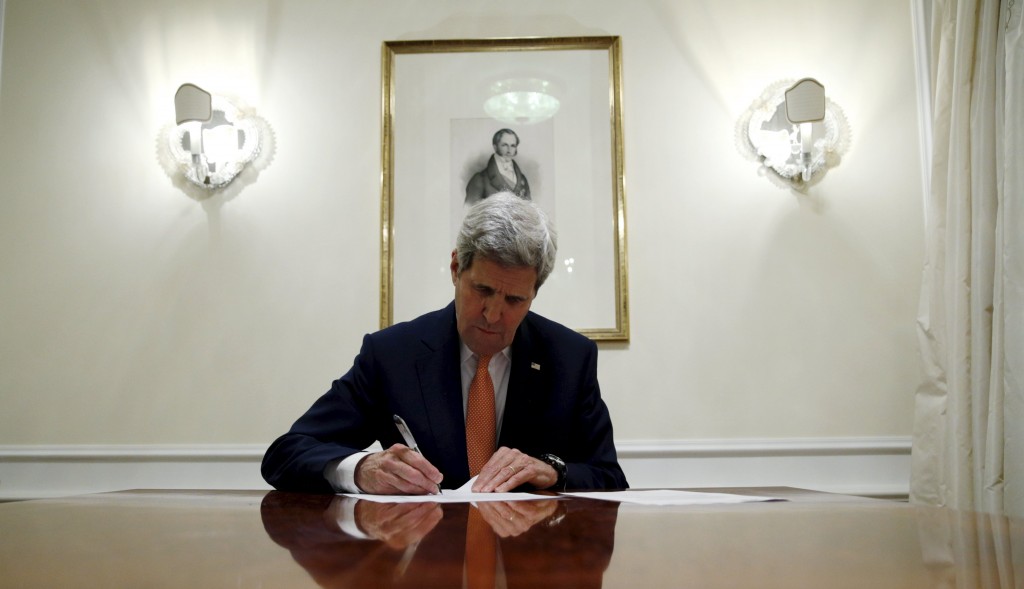 Secretary of State John Kerry on Tuesday defended the landmark nuclear deal the United States made with Iran, ahead of a congressional hearing where Senate Republicans are expected to hammer the Obama administration for considering easing of financial restrictions against Tehran.

Kerry acknowledged the harsh criticism of the arrangement, which was designed to prevent Iran from becoming a nuclear power, telling MSNBC there’s a furious debate even in Iran, over whether Tehran should choose missiles over dialogue.

“I think what you’re seeing there is tension” between moderates and hard-liners over Iran’s future course, Kerry said.

Kerry’s remarks came just hours ahead of a scheduled hearing by the GOP-led Senate Foreign Relations Committee on the implementation of the nuclear accord. Thomas Shannon, the Undersecretary of State for Political Affairs, will testify.

The committee’s hearing comes amid reports that the administration may relax the prohibition which prevents U.S. dollars from being used in transactions with Iran. Angry lawmakers, who contend the U.S. was taken advantage of in the deal, have countered that Tehran will be getting more than it deserves from the international nuclear pact reached last year.

While no final decision has been made, officials told The Associated Press that the Treasury Department has prepared a general license permitting offshore financial institutions to access dollars for foreign currency trades, in support of legitimate business with Iran, a practice that is currently illegal.

Several restrictions would apply, but the change could still prove significant for Iran’s sanctions-battered economy. It also would be highly contentious in the United States, where Republican and several Democratic lawmakers say the administration promised to maintain a strict ban on dollars, along with other non-nuclear penalties on Iran after last July’s seven-nation nuclear agreement.

The nuclear pact provided Iran with billions of dollars in sanctions relief in exchange for curtailing programs that could lead to nuclear weapons. But the Iranians say they haven’t benefited to the extent envisioned under the deal because of other U.S. measures linked to human rights, terrorism, and missile development violations.

Kerry told MSNBC that Iran “needs to make some clear decisions about the role that it intends to play in the region and the world.”

Kerry added, “if they’re cheating, we will know it.”

Members of the committee may also press Shannon on the need for stricter sanctions against Iran, for what Republicans have called repeated violations of a U.N. ballistic missile test ban.

A group of Republican senators last month unveiled legislation that requires the administration to sanction every sector of Iran’s economy which supports the country’s ballistic missile program. The bill, introduced by Sen. Kelly Ayotte, R-N.H., is a reflection of longstanding exasperation among GOP lawmakers who’ve complained that President Barack Obama has failed to properly punish Tehran for test-firing ballistic missiles.

Iran’s Revolutionary Guard test-fired two ballistic missiles on March 9 and U.S. officials said the launches were in defiance of the U.N. resolution, which calls for Tehran not to launch any ballistic missiles capable of delivering a nuclear weapon.

The administration in January announced sanctions against Tehran for missile firings in late 2015, but Republicans called those measures tepid and weak.