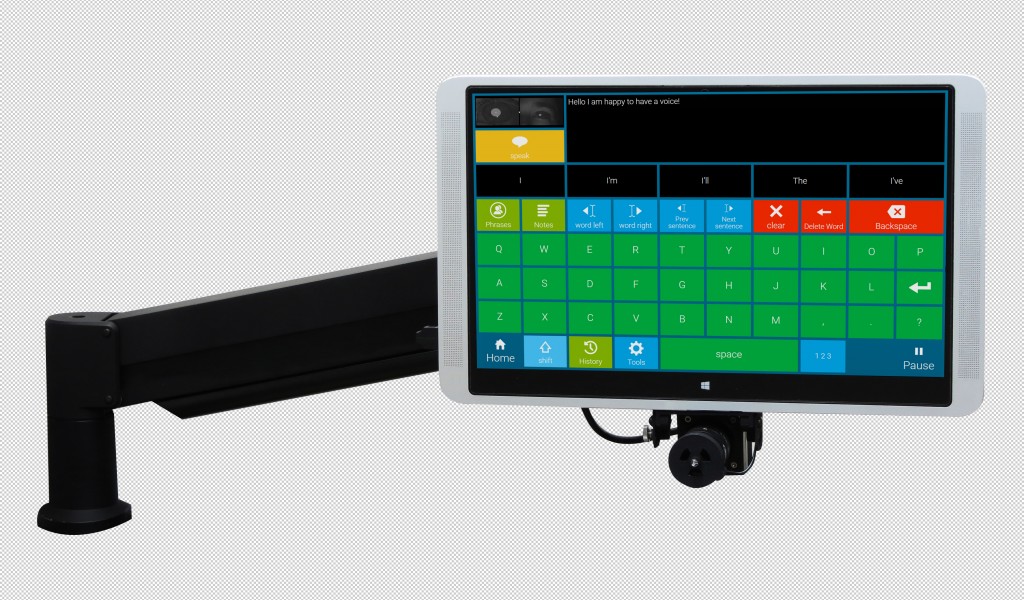 Cathy Manner once worked up to 18 hours a day caring for Ecuador’s sickest children, running from cot to cot and hauling bulky medical shipments into a mobile hospital. Before and after her seven overseas missions, the pediatric nurse worked with very ill children at several Baltimore hospitals, then hopped in her car on weekends to drive from her Anne Arundel County home to the Eastern Shore of Maryland to babysit her grandchild.

But her life changed abruptly early in 2012, beginning one day when she was assessing a young patient in Baltimore.

“I went to tell her mother my name and could hardly say it,” Manner said. “I was slurring, and so badly my words weren’t recognizable.”

Still, she took off for another mission, despite another alarming change.

“I was getting weak, even needing help putting carry-on luggage overhead,” said Manner, who is now 64.

But she does not vocalize these words. She can no longer speak. She can only nod and move her eyes. She gazes at letters on a keyboard that is connected to an assistive device. With her eyes serving as her cursor, she uses the device to compose messages.

Months after her first symptoms, Manner was diagnosed with ALS —amyotrophic lateral sclerosis, also known as Lou Gehrig’s disease. The neuromuscular disease led to full-body paralysis that has left her locked in —fully aware of everything around her but unable to respond other than to nod or use her eye-gaze machine.

Manner is one of about 6 million people in the United States with paralysis, about 16 percent of whom are severely affected, according to the Christopher and Dana Reeve Foundation. The leading causes are stroke, spinal cord injury, multiple sclerosis, cerebral palsy and ALS.

“Many of the people I see [with degenerative conditions] are homebound, and often on ventilators. And communicating has become a challenge for them,” said Erin Swann, manager of the assistive-technology program for the ALS Association’s chapter that serves the Washington area.

But equipment such as Manner’s, which can convert typing to spoken words, is giving people their voices back, enabling some to work full time, go to school, listen to music and bond with family and friends.

The voice, Manner said, sounds deliberate and somewhat like a robot, but you can slow it down, speed it up and change the sound.

“There’s a female and male voice, a child’s or adult’s, and even accents,” she said. “And you can change options. For a while, I had a British accent.”

These aids include an application where people can scroll through a PowerPoint presentation with a switch they control, perhaps with a toe and, for people who are able to move their head, a device that allows them to point to letters with a reflective marker worn on their forehead. When they dwell on a letter with their eyes or with the reflective marker, the computer recognizes and selects the letter. There is even a piece of experimental technology being developed for people who cannot move at all: Implanted electrodes read their brain signals as they imagine moving their fingers on a keyboard. This mental imaging allows them to compose messages virtually.

While the devices now available aren’t quite as wondrous, they do allow people once considered unreachable to connect. For some, it means their thoughts in their last days can be heard.

“It gives them a way to say goodbye if they are having to do that,” said Laura J. Ball, director of hearing and speech research at Children’s National Medical Center. She recalls a message left behind by a patient.

“Her final words were ‘I’m at peace. I’m ready. I love you.’ Things she would not have been able to say but that her family had a chance to hear,” Ball said.

The equipment’s cost, which insurance usually covers, varies. The eye-gaze device that Manner uses costs $10,000 to about $17,000.

“But it’s getting to where some of the technology is available on iPads,” said James McCarthy, executive director of the Maryland Technology Assistance Program, a state service that loans equipment to individuals. “You can buy a device at a retail electronic store,” he said, “then purchase software with voicing abilities at an assistive-technology store for a total of about $2,000 or $3,000.”

Still, learning how to use the equipment takes work. Swann teaches people with ALS how to line up the camera with their eyes and how to save common phrases into an easily activated “blink button”—maybe “I have to go to the bathroom” or “I’m hot” or “I’m cold.”

Communicating again, Swann said, means that people can call for help in an emergency. And for one veteran, it meant being able to earn a degree while living in a nursing home.

Ball works mainly with children who have spinal muscular atrophy, a condition that leaves them with almost no motor skills.

“[They are] on ventilators because they have no muscles to support breathing, but they have potential to develop normal cognitive linguistic skills,” Ball said. “We look at language that would be typical for that age. Do they like storybooks? Do they follow along as parents read? We identify ways to evaluate that and provide a way to access communication.”

She recalls a sixth-grader who was shuffled off to another room with an aide whenever his peers joined for reading circles and other interactive activities.

Manner, who got her eye-gaze device in December 2014, said it has given her a reason to live. “My brain is sharp and with the exception of this evil disease I’m healthy,” she said. “And I am a talker.”

A company called Eye Tech Digital Systems has added capabilities beyond language-related ones. Its devices have remote controls enabling people to turn on lights or to open doors using their eyes. And wheelchairs controlled by eye gaze are in the pipeline, according to Keith Jackson, the company’s sales and marketing director.

Melanie Fried-Oken, a professor of neurology at Oregon Health & Science University, is hopeful about what may come from the research that leverages mental imaging.

Even “if you can’t use your arm from a stroke,” she said, “by thinking about making a fist you would be able to send a message from the brain to the hand and bypass the spinal cord to learn how to use your hand.”

Manner is grateful for what’s available to her today.

“I have a voice now. Although typing with your eyes is a bit slow,” she said, joking that sometimes she feels as though she is getting carpal tunnel of the eyeballs.

“But it keeps me relevant. I am able to manage my own health care … And I continue to enjoy life and the company of friends and family keeping me laughing through this journey.”