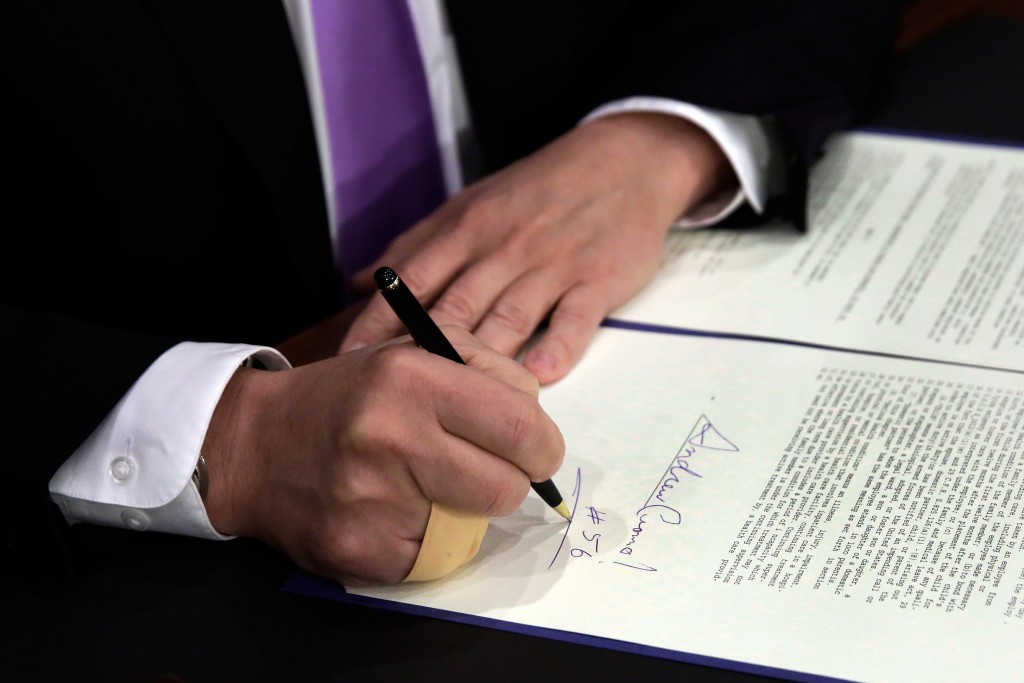 A higher minimum wage approved in New York is a “watershed” that will lead the way for better wages nationwide, Hillary Clinton said Monday as she hailed her adopted home state’s new law to gradually raise the minimum wage to $15 an hour.

“I know it’s going to sweep our country,” Clinton said. “It shows the world what kind of community we are, and what we can get done when we work together.”

Although she heaped praise on New York for passing the higher wage and called it a national model, she did not endorse the idea of a $15 wage across the board.

Clinton supports raising the current federal minimum of $7.25 an hour, but says the $15 an hour rate should only apply in localities that choose it. She said the New York law will help put pressure on opponents of a higher national minimum wage.

“Donald Trump has said that wages are too high,” and many in his Republican Party agree, she said.

That sets her apart from much of the organized labor movement, which has largely united behind a goal of a $15 national wage. It also marks a difference with rival Sen. Bernie Sanders, who calls the current level “starvation pay” that should be raised to $15 everywhere.

“There is still a right thing and a wrong thing in life. New Yorkers did the right thing,” Cuomo said.

“Middle-class people and working-class people are angry,” Cuomo told a cheering crowd, many in shirts with labor union logos. “In this economy they have been going backward for decades,” and many fear the “American Dream is slipping away,” he added.

“They’re afraid they’re losing that dream. Why? Because you can’t afford the (rising) cost of living … when you have stagnant wages,” Cuomo said. “At $9 an hour, you can’t raise a family in New York.”

The higher minimum wage is a way to channel that anger and fear into positive change, Cuomo said before introducing Clinton.

Cuomo also took a swipe at Republican front-runner Donald Trump and his plan to deport all illegal immigrants, and made fun of Trump’s promise to build a “beautiful wall” across the U.S.-Mexico border.

The $15-an-hour movement took hold with a strike by fast-food workers in New York City four years ago. It has gained prominence with a national discussion of income disparities, and in a Democratic race focused on the widening gap between the rich and the poor.

Twenty-nine states and the District of Columbia already have mandated minimums above the federal level. New York currently has a $9 minimum wage.

The New York legislature approved the plan last week to raise the mandated minimum wage in New York City over three years, followed by suburban Westchester County, where Clinton lives, and Long Island by 2023. The minimum wage would rise only to $12.50 in the rest of the state by 2020, with further increases tied to economic conditions.

The compromise plan is similar to one approved in California last week. Both are seen as models for other Democrat-run states. California Gov. Jerry Brown was signing the law Monday to raise the current $10 minimum to $15 statewide by 2022.