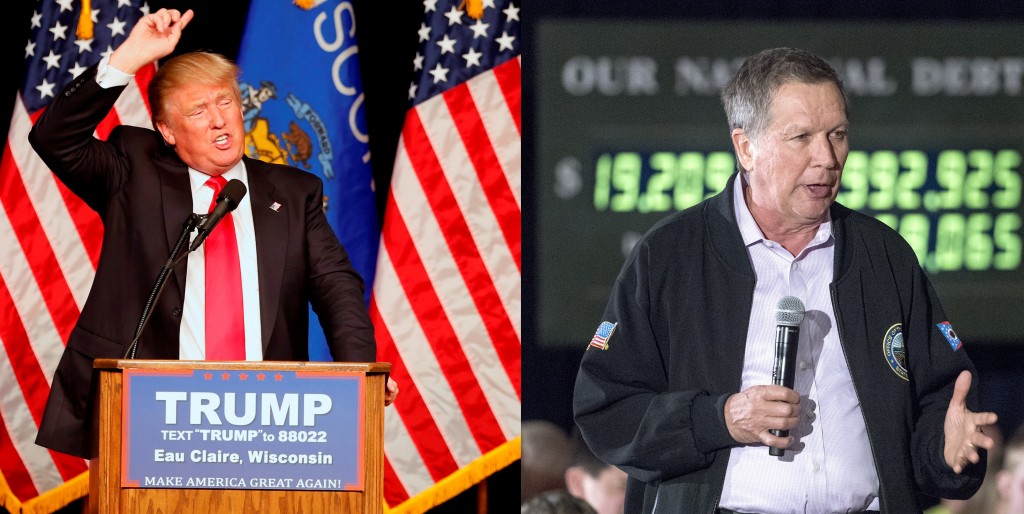 Republican presidential candidate Donald Trump on Sunday called on Ohio Gov. John Kasich to drop out of the GOP nominating contest, accusing him of siphoning away potential Trump voters and telling reporters that he expressed his displeasure while meeting with Republican National Committee officials last week.

“All he’s doing is just, he goes from place to place, and loses, and he keeps running. Well, why doesn’t Marco Rubio do that? Why doesn’t Jeb Bush do that? Why didn’t all of them do that?” Trump told reporters on Sunday. “Now if he wants to go and have his name put in nomination in the convention, he can do that. He doesn’t have to run and take my votes.”

The real estate mogul stopped by Miss Katie’s Diner here in Milwaukee on Sunday. The quaint 1950s-themed restaurant has hosted several presidential candidates in the past. Trump shook hands and spoke with surprised diners for several minutes before sitting down to eat breakfast with his senior advisers.

It was a rare campaign stop for Trump, who typically interacts with voters on the rope lines at campaign rallies.

Though Trump acknowledged that a string of controversies last week “might” cost him votes, he remained bullish that he could put out a victory in Wisconsin despite Sen. Ted Cruz’s significant lead there. Recent polls have shown the mogul trailing Cruz by huge margins, including a Marquette Law School poll that showed him with 30 percent support to Cruz’s 40 percent.

Trump rejected the notion that Wisconsin could turn out like Iowa, which neighbors Wisconsin and where he suffered an important loss against Cruz.

Trump said he discussed Kasich’s long-shot bid with RNC Chairman Reince Priebus when the two met last week in Washington. Kasich has no mathematical path to an outright primary victory, as he is too far behind in the delegate count to cross the 1,237-delegate threshold for securing the party’s nomination outright. His only hope of winning the nomination is if he emerges as a consensus candidate in a contested convention.

Trump said Kasich is taking votes from him, increasing the possibility that Trump will be unable to capture enough delegates and win outright, and increasing the likelihood of a contested convention. There, anti-Trump forces in the Republican establishment are likely to maneuver to install a nominee who can consolidate delegate support against the billionaire.