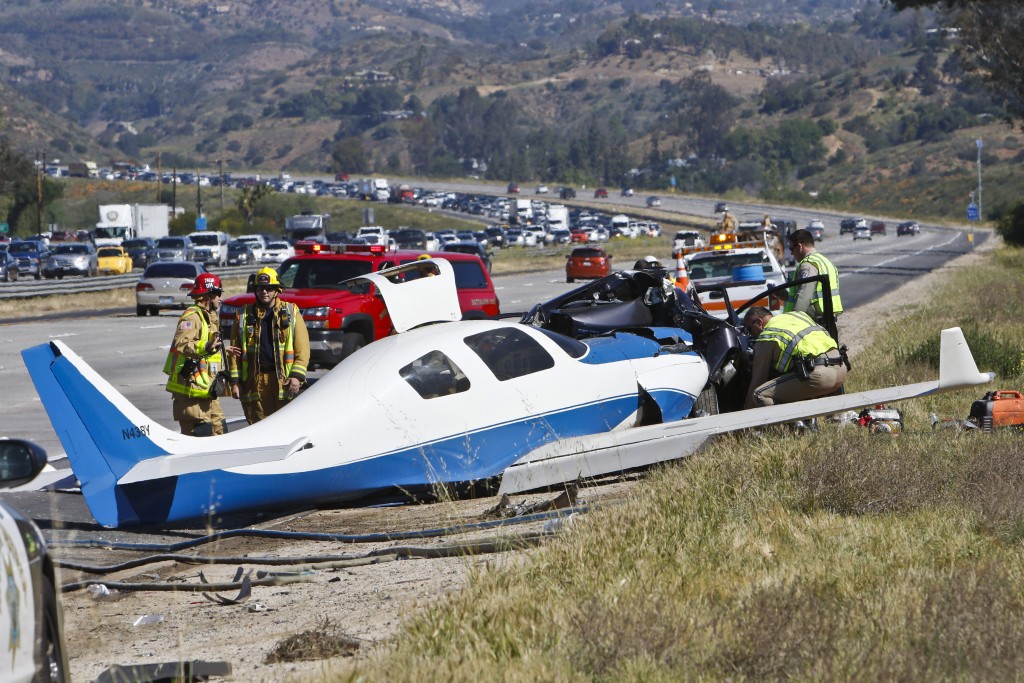 A small plane that made headlines when it landed safely on a Southern California freeway years ago crashed on the same stretch of road Saturday, slamming into a car and killing a woman in the vehicle.

Five others, including the pilot and his passenger, were injured in the crash on a stretch of Interstate 15 that has been the scene of several emergency landings.

Witnesses said the single-engine plane appeared to be having problems before it banked and came down, California Highway Patrol Officer Chris Parent said. One man said he didn’t hear the plane’s engine as it passed overhead.

The Lancair IV landed on its belly and skidded about 250 feet before striking the rear of a black Nissan Altima sedan that was stopped on the shoulder of the road in San Diego County near Fallbrook. The driver of the car had pulled over to synchronize the Bluetooth device on his phone, Parent said.

The impact crumpled the back of the car, fatally crushing Antoinette Isbelle, 38, of San Diego in the back seat and injuring three others in the vehicle, authorities said.

“The plane went completely into the trunk and pushed the rear bumper almost into the rear passenger seat,” said John Buchanan, spokesman for the North County Fire Protection District.

Pilot Dennis Hogge, 62, and his female passenger suffered major injuries, Parent said. The driver suffered moderate injuries, and his other two passengers were expected to survive their injuries.

The plane was once owned by major league catcher Matt Nokes, who made a noteworthy landing on busy I-15 when the engine quit on its second flight on Feb. 18, 2000.

Nokes guided the high-performance $500,000 plane to a smooth landing and safely taxied off the road without injuries.

Nokes went on to fly the plane every day for five years without incident before selling it. He said it had been rebuilt several times since he sold it.

“It was crazy,” Nokes told The Associated Press on Saturday. “Everything worked out so beautifully. It was almost a humorous thing. Unfortunately, it doesn’t always turn out that way.”

When Nokes heard about the crash, he unsuccessfully tried to reach Hogge. He didn’t realize Hogge had been injured.

He described Hogge as a good man, an outstanding pilot and a master plane builder.

Nokes said the freeway is a popular route for flying because there are fewer flight restrictions than along the Interstate 5 corridor.

The crash caused major backups throughout the day on the freeway that runs from the Mexican border through Las Vegas and Salt Lake City to Canada.