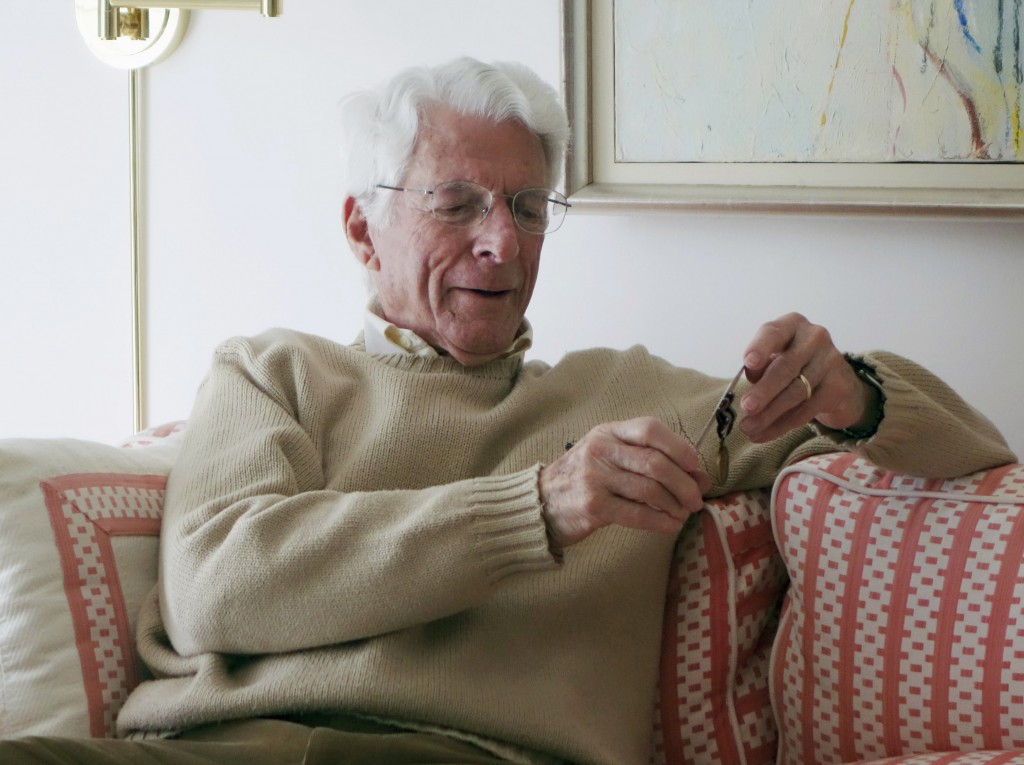 Edwin Shifrin’s family knew he successfully escaped from a Nazi prison camp during World War II, but it wasn’t until one of his children started digging into his wartime past that they learned the details of the clever escape.

Shifrin, 93, seldom discussed his time at war, but he received a prisoner-of-war medal in February after son Dan Shifrin dug through old news reports and his father’s military records and pieced together what happened.

“It is an amazing story,” said Missouri Sen. Claire McCaskill, who expedited the medal process after hearing about it from Shifrin’s daughter in January. Shifrin received the award during a family-only ceremony in the suburban St. Louis apartment that he shares with his wife of 67 years.

“This is the very best part of my job,” McCaskill said by phone from her Senate offices in Washington.

Edwin Shifrin’s memory is fading, so his son Dan shared his story:

Assigned to the Army’s 30th Infantry Division, 1st Battalion, 117th Infantry Regiment, Comp, and then fought the Germans in battles at St. Lo and Mortain.

The Germans captured him on Aug. 7, and Shifrin was sent from a prison camp to his final stop, Poland lockup Stalag IIIC, which was about 90 miles from Berlin. Telegrams to U.S. family members notified them he was missing in action.

Shifrin was among the camp’s roughly 1,000 prisoners, many of whom formed “an escape committee” and drew up a getaway plan.

Each morning when the Germans did a simple numerical headcount – no actual names were called out – a prisoner designated by the committee would hide, touching off what turned out to be a futile search by guards. The hiding prisoner would later quietly rejoin the others, but the befuddled guards would lower the next day’s headcount by one.

On the second day, two prisoners would hide, touching off another futile search and getting the guards to lower the next day’s head count by one again. That continued with three and four prisoners hiding and the guards classifying them as escaped. Eventually, four men actually escaped, but the guards didn’t notice because they had already lowered the roll-call numbers to account for the prisoners who had hidden.

Shifrin and some other prisoners got their chance in mid-January 1945, just weeks before the Russians liberated the camp. Dan Shifrin said “the rest of their journey is pretty hazy,” but what’s known is that they hitchhiked on Allied supply trucks and purloined rides on horses and bikes on their way to Italy. By that April, Shifrin was back on U.S. soil, in Boston.

After getting his law degree, he became a St. Louis attorney and worked well into his 80s. He seldom discussed his time at war.

“We knew he’d been in the war, that he had been captured and that he escaped. That’s about it. He didn’t talk about it,” said Dan Shifrin, who lives in the Denver area. “My guess is he figured it was just part of his life – many went through it, many didn’t return. Many of those who did return didn’t return in one piece.”

Chronicling his dad’s past, Dan Shifrin added, “gave me much greater appreciation for what he and others went through.”

“I guess also it’s that these men and women are dying at an unbelievable rate and their stories are being lost. This is one more story we can tell and keep alive.”