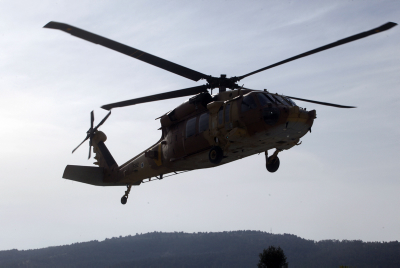 Two Palestinian Authority Arabs were found Motzoei Shabbos after a long search stuck on a cliff in the area of Nachal Dragot, near the Jordan Valley. The IDF responded to a report that two Arabs had managed to cross a security fence and enter Israel, and a wide-ranging search was started. The two were finally found on the cliff, unable to proceed further or retrace their steps.

The Arabs had apparently jumped down onto the cliff, thinking that there would be a path down to the Nachal, but found that they were boxed in – and meanwhile were unable to get back up the drop that they had climbed down because it was too steep. They were spotted by soldiers overnight, who eventually decided to rescue them by helicopter. A helicopter was summoned and dropped a rope from 300 meters in the air, with soldiers dropping down and securing the Arabs to a hook that pulled them back up. The Arabs were then taken into custody.

Overnight, security officials said they arrested six wanted security suspects in Yehudah and Shomron. The suspects were wanted for participating in rioting and throwing stones and firebombs that endangered Israeli civilians and IDF soldiers. Several of the suspects were also charged with belonging to Hamas. All were being questioned on their activities by security forces.