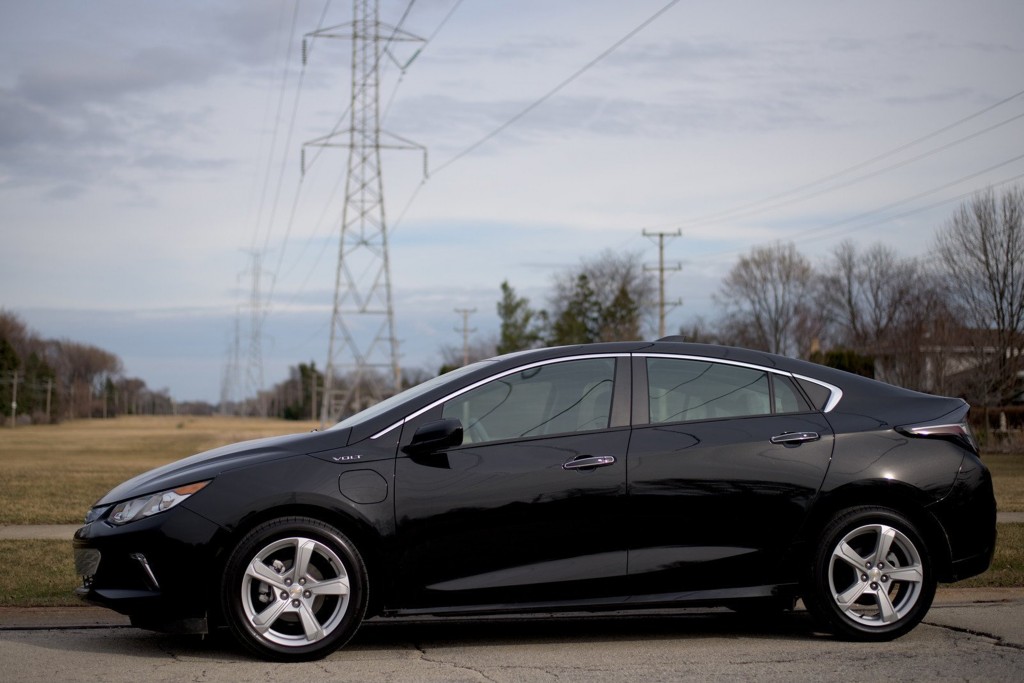 You like trees. You like cars. With the Chevrolet Volt, those preferences don’t have to be at odds.

Despite being 3 inches longer, it doesn’t look much different than the previous model except for the shark-fin antenna. The nose dips lower, the split fascia with wide-mouth lower grille area has a more modern look and the hatch is more streamlined. The Volt has also shed 243 pounds.

The Volt has a new 1.5-liter four-cylinder engine that charges the battery when the plug-in juice runs dry so you don’t have to worry about running out of power. Volt owners could keep filling up the 8.9-gallon tank and get an impressive 42 mpg, but why bother when it can be plugged in at home, yielding the equivalent of 106 mpg?

Plug-in doubters and gasoline proponents will argue that a plug-in car’s greenness depends on the source of home electric power, which varies by region based on the ratio of coal, nuclear, or renewable power plants. In 2015, the Union of Concerned Scientists found definitively that a plug-in car produces 50 percent fewer emissions over the course of its life span, including production and disposal, than a similar gas-powered car, on average.

Plugging into a standard 120V garage outlet (access to home charging is the plug-in problem in cities, where such cars are most appealing) delivers a full charge in 13 hours according to GM, but the Volt tester never made it to a full charge during our week. Might’ve been the cold nights.

Still, there was plenty of battery power for nearly all our commuting needs. In about 300 miles of driving, we used a two-third gallon of gas.

When the battery runs out, the generator kicks on, making an audible groan that rises and falls with the throttle. It’s noticeable with the radio off, only because of how quiet the Volt is in all-electric mode. It’s the sound of the past, reminding the driver how silly it is to be powered by old-fashioned gasoline.

The overlooked truth of plug-in cars is the punchiness behind the wheel. The two-motor drive unit of the Volt, powered by a lithium-ion battery pack, generates a whopping 294 pound-feet of torque that is instantaneous and ever-present. Mash the pedal and the Volt launches with a delightful, near-silent whir, as if you’re getting away with something. There are no gear shifts, no delays, so even at highway speeds the responsive Volt darts about.

Like the original Volt, there are four drive modes, including mountain mode, which adds engine power for steeper grades, and a hold mode that saves battery power and uses the engine, which is ideal for highway commuting when an engine runs most efficiently. Sport mode was most noticeable in the efficiency equation: We averaged 77 miles per gallon equivalent compared with 103 mpge in normal mode.

The punchy power train made us also want to push the handling, which brought a big reminder that the Volt is not a sports car. It’s snappy enough in and out of turns, though the steering is loose like a traditional compact.

I love the new Volt from the front seats (B-pillar) forward. The cabin feels upscale in the Buick way. The wheel has simpler, redundant buttons instead of the blend of roller dial and buttons. The buttons take some getting used to in concert with the reconfigurable 8-inch instrument cluster.

To the left of the energy dial is a menu for audio controls, vehicle info, trip meters and more; on the right you can dig a little deeper between modes. The menus only appear when you press the left or right button on the wheel, so the display while driving is sharp and uncluttered. Toggling through options on a screen instead of having a button for each one is preferred. Volume controls are on the back of the steering wheel, a la Chrysler.

On the left of the steering wheel is a paddle to control regen braking, as in the short-lived Cadillac ELR. Instead of using the foot brake, the paddle sends power back to the battery more aggressively, resulting in a harder brake than with the foot brake. It won’t let you come to a full stop, and is more of a tech toy than anything else.

The center console is the showcase of the improved interior design. There are fewer controls and buttons, but enough for traditional radio and climate controls. The wide, 8-inch touch screen has large icons and is reachable without a lean. Energy info is more detailed than before, and the voice commands are the best in this price range, benefiting from decades of cars with OnStar mics. I didn’t like how the radio defaults to Bluetooth once a call ends; It should go back to what it was before the call. A cavity for smart phones and USB ports completes the neat, symmetrical dash design.

But the praise ends in the back. It bothers me that GM says the Volt seats five. Just because you add a fifth seat belt does not mean you have five functional seats. There is a massive middle hump because of the T-shaped battery pack running to the rear seat. The center console extends over the hump to the back, with two cup holders reaching to the rear seat, so only an infant can fit — or young people cramming the car with friends, or circus clowns. The Volt feels like a compact, neither too tight nor too roomy.

The 60/40 split seats give it hatchback versatility, despite the battery pack.

The new Volt is better in nearly every way, and it needs to be to stand apart from the upcoming all-electric Bolt, which will have a 200-mile range. Sales of plug-in cars have plateaued due to low gas prices, but the new Volt is an excellent fuel-saving option with a quiet but spirited ride.

2016 Chevrolet Volt LT at a glance

Parting shot: Better in every way, the new Volt is the future of cars.