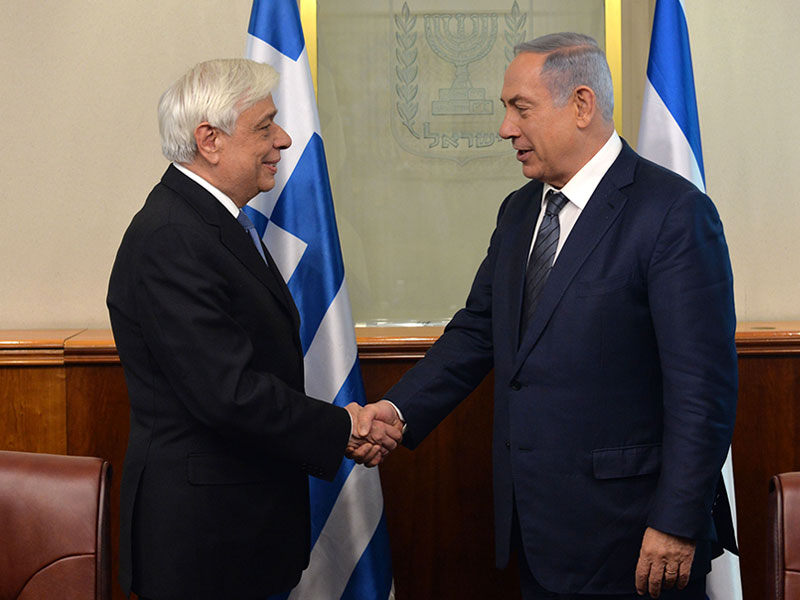 During his official visit to Israel, Greek President Prokopis Pavlopoulos met with Prime Minister Binyamin Netanyahu, in the latter’s office in Yerushalayim, on Thursday.

Netanyahu greeted Pavlopoulos, “I welcome your arrival and am pleased at the strong ties between our countries. We have common values. We are two democracies and I am pleased at the continuity in our good relations. I very much believe in the cooperation between our countries, which we will expand in a range of areas: energy, tourism, knowledge, innovation and others.”

Netanyahu added that “the Arab states understand that Israel is not an enemy but an ally against Iran and Daesh. There is great importance to the strategic role that Israel is fulfilling in the region. Israel contributes to stability in the Middle East. A strong Israel prevents the passage of masses of refugees to Europe.

“The world would be different if we were not here,” added Netanyahu.

Greek President Pavlopoulos said in his remarks, “I would like to thank you for the assistance and cooperation between our countries. Israel is a western democracy. We feel close to Israel and see you as allies.”

On the terror front, the Greek president elaborated that “terrorists represent barbarism. Only together will everyone be able to resolve the refugee problem and not each country on its own. We are pleased and grateful at the bilateral G2G cooperation and I would like to positively note the cooperation with Cyprus. The two nations will be able to continue working for Europe and the region. As prime minister you have an important role in these relations.”

Pavlopoulos was in Israel at the invitation of his Israeli counterpart, Reuven Rivlin. During his three-day visit last week, the president met with Rivlin. He also visited the Holocaust Museum.

The president was presented with an Honorary Doctorate in Law from the Hebrew University of Yerushalayim.

The Greek president’s visit in Israel concluded after his meeting with Prime Minister Netanyahu.

Ahead of his visit, in an interview with Yisrael Hayom newspaper, President Pavlopoulos urged Israeli firms to invest in Greece.

“The economic relations between the two countries are terrific,” Pavlopoulos said. “Bilateral trade grew by 32 percent over the past year. There are currently 30 joint projects that involve Greek and Israeli companies, and we will soon invite additional companies to take part in more projects.”

He said Greece has encouraged Israeli companies to “seize the many opportunities they have to invest in Greece.” He said he was doing his utmost to provide for a safe and business-friendly environment. In January, Netanyahu signed a strategic pact with his Greek and Cypriot counterparts.