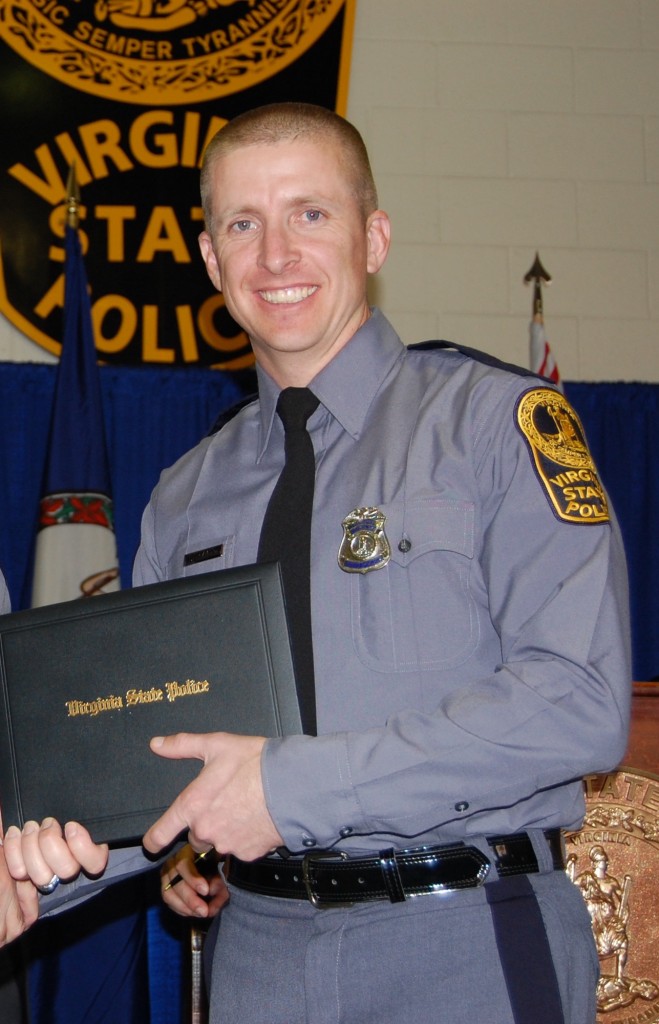 Virginia State Police spokeswoman Corinne Geller identified the shooter as James Brown III, 34, of Aurora, Ill. Police did not give a motive for the shooting.

Brown shot Trooper Chad P. Dermyer, 37, multiple times Thursday before he was killed by two other troopers, police said. Dermyer had been participating with about a dozen other troopers in a training exercise at the bus station when a brief encounter with the gunman quickly turned violent, police said.

Two women also were shot, but were expected to recover. Their names haven’t been released, but spokesman Ryan Yarosh with Binghamton University in New York said Friday that one of the women was a member of the school’s track team. The team was headed Thursday to a meet at the College of William and Mary in Williamsburg, about 50 miles from Richmond.

Police say the slain trooper, the father of two children, was a native of Jackson, Michigan, and a former Marine who had served on the force in Jackson and Newport News, Virginia.

Earlier this year, Dermyer and another trooper briefly became mini-celebrities when they rescued a lost dog running through interstate traffic in Hampton.

Dermyer and his partner returned the dog, a miniature schnauzer named Pinta, to its owner, Jeffrey Corbin. Corbin said Friday that the brief meeting helped change his perception of state troopers.

“I don’t have a lot of contact with state troopers, but in my mind’s eye they seem to be all business,” Corbin said. “But he seemed to be a really warm person. … He had a warm persona about him.”

Dermyer was dressed in a fatigue-style uniform and was not wearing a protective vest when he was shot, said Virginia State Police Superintendent Col. Steven Flaherty.

“We’ve got a lot of evidence to sift through,” Flaherty said. The evidence, he said, included bags that could have belonged to Brown.

A small army of law-enforcement officers in tactical gear and dozens of cruisers and emergency response vehicles flooded the station, in an area that includes a minor league baseball stadium and a variety of commercial establishments and restaurants.

City Councilwoman Reva Trammell called it “the saddest day in the city of Richmond.”

“State troopers doing their job and innocent people shot,” she said. “Why? This was a senseless act.”

In a statement, Virginia Gov. Terry McAuliffe said: “This is a loss that impacts us all. It should inspire prayers for the family, friends and fellow troopers who are mourning tonight, and gratitude for those who protect and serve.”

Greyhound issued a statement on Thursday afternoon saying that the Richmond bus station would be closed “until further notice.”