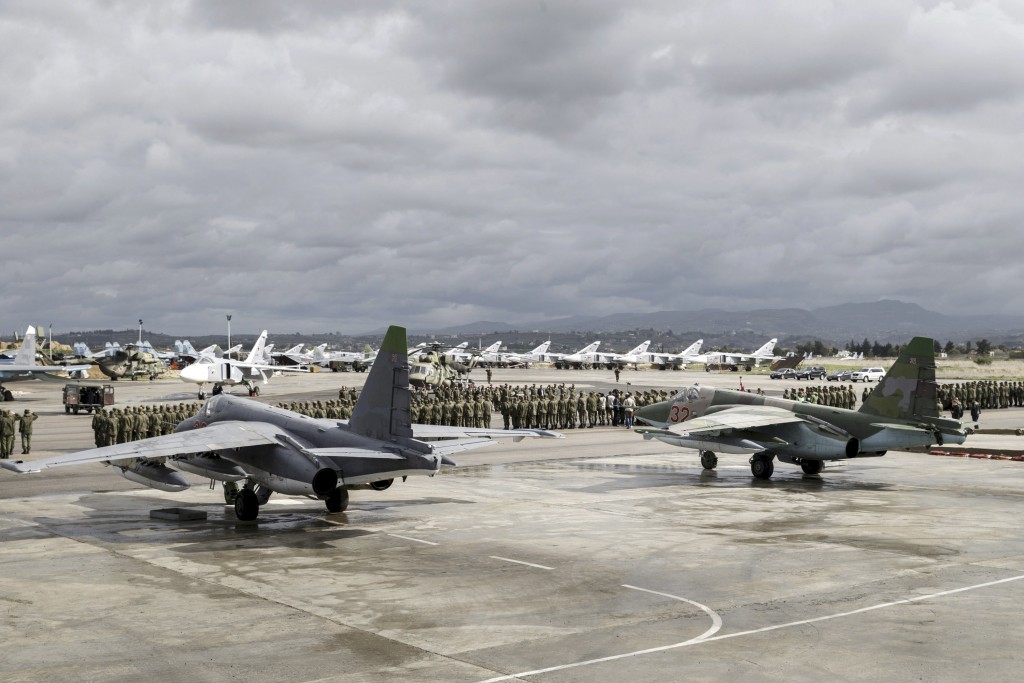 When Vladimir Putin announced the withdrawal of most of Russia’s military contingent from Syria there was an expectation that the Yauza, a Russian naval icebreaker and one of the mission’s main supply vessels, would return home to its Arctic Ocean port.

Instead, three days after Putin’s March 14 declaration, the Yauza, part of the “Syrian Express,” the nickname given to the ships that have kept Russian forces supplied, left the Russian Black Sea port of Novorossiysk for Tartous, Russia’s naval facility in Syria.

Whatever it was carrying was heavy; it sat so low in the water that its load line was barely visible.

Its movements and those of other Russian ships in the two weeks since Putin’s announcement of a partial withdrawal suggest Moscow has in fact shipped more equipment and supplies to Syria than it has brought back in the same period, a Reuters analysis shows.

It is not known what the ships were carrying or how much equipment has been flown out in giant cargo planes accompanying returning war planes.

But the movements – while only a partial snapshot – suggest Russia is working intensively to maintain its military infrastructure in Syria and to supply the Syrian army so that it can scale up again swiftly if need be.

Putin has not detailed what would prompt such a move, but any perceived threat to Russia’s bases in Syria or any sign that President Bashar al-Assad, Moscow’s closest Middle East ally, is in peril would be likely to trigger a powerful return.

Russia operates an air base in Hmeymim and a naval facility at Tartous. Putin has said Russia will keep both and that they will need to be well protected.

“Since the main part of the force de facto stayed there, there is no reason to reduce the traffic,” said Mikhail Barabanov, a senior research fellow at the Moscow-based CAST military think tank. “Supplies for the Syrian army remain significant as well.”

Moscow has not revealed the size of its force in Syria, nor has it given details of its partial withdrawal.

Reuters has calculated that around half of Russia’s fixed-wing strike force based in Syria flew out of the country in the days after the partial draw down was made public. The precise number of planes Russia had was secret, but analysis suggested it had about 36 fixed-wing military jets there.

On Monday, state media showed three heavy attack helicopters being flown out of Syria along with some support staff.

But an examination of shipping data, official information, tips from maritime security sources, and photographs from bloggers showing Russian ships passing the Bosphorus strait en route from the Black Sea to the Mediterranean, reveal no signs that the “Syrian Express” is being wound down.

A Reuters analysis of the same data shows Russia is also likely to have reinforced its naval force in the Mediterranean and now appears to have more war ships near the Syrian coast than at the time of Putin’s declaration. Their role is to protect cargo ships. Their presence also gives Moscow the option of firing cruise missiles from the sea.

Russia appears to have more than a dozen military vessels in the Mediterranean, including the Zeleniy Dol warship equipped with terrain-hugging Kalibr cruise missiles which are accurate to within three meters, according to Russian state media and the database of Bosphorus Naval News, a Turkish online project.

Moscow is likely to maintain that strength, said CAST’s Barabanov.

“Russia doesn’t have too many ships that it can keep in the Mediterranean. The role of the force was to ensure the activity of the ‘Syrian Express’ and to demonstrate it to the West and, later, to Turkey.”

The Russian defense ministry did not reply to questions about what the Russian navy was doing in the Mediterranean or whether there were plans to reduce its presence.

Russia’s military ships and most auxiliary vessels are not shown in publicly available databases. But most of its ships are seen and photographed when they pass the Bosphorus on their way from Russia to the Mediterranean or vice versa. In most cases it is impossible to track military shipments to destination ports, however, meaning data is only partial.

Since Moscow began to scale back in Syria, Russia has sent two landing ships, which are typically used to transport troops and armor – the Caesar Kunikov and the Saratov – to the Mediterranean along with the Yauza, an auxiliary cargo vessel.

The Saratov looked loaded when it passed the strait on Thursday going south towards Syria. Its load line was visibly lower than on March 14 when it was photographed going the other way, towards Russia.

At the same time, two warships – the Alexander Otrakovsky and the Minsk – and the Dvinitsa-50, an auxiliary vessel, were photographed by Turkish bloggers passing the Bosphorus en route back to Russia.

At least two of the returning ships, the Alexander Otrakovsky and the Dvinitsa-50, looked unloaded on their way back. Photographs show that the Otrakovsky, a large landing ship, sat higher in the water on its return to Russia compared to March 2 when it crossed the strait in the other direction. It was not clear if it carried troops or equipment.

The load line of the Dvinitsa-50 was also high above the water when it was photographed in the Bosphorus on March 20 on its way back to Russia.

It seems unlikely that Russian troops or equipment were on board any of the returning ships. None of them looked like they had heavy cargo onboard.

The Minsk has already headed back towards Syria. On Tuesday, it was photographed passing the Bosphorus. Its bow sat deep in the water; its cargo could not be discerned.

Non-military cargo traffic between Russia and Syria also shows no signs of flagging.

Four cargo ships involved in the supply operation called at Syria in the two weeks before Putin announced the draw down.

A fifth, the Alexander Tkachenko, a Russian ferry, previously photographed with military trucks onboard, probably called there too.

Reuters shipping database showed it was approaching Syria, but then suddenly disappeared for a few days before re-appearing en route back to Russia, meaning its transponders were not switched on for that period.