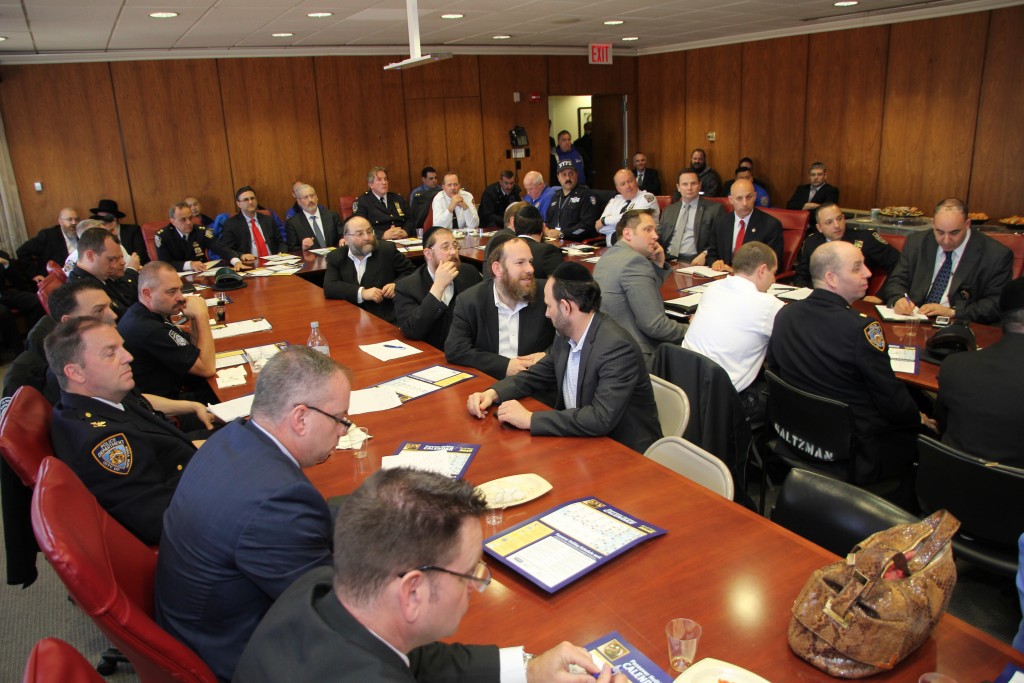 The people who can make Brooklyn’s Orthodox areas run smoothly over Pesach or turn matters into a tough slog gathered on Wednesday afternoon to hear what it’s all about.

The meeting, billed by organizers as New York’s most comprehensive pre-Pesach conference ever, discussed a range of scenarios, from allowing trailer-containers to expand store space to easing traffic enforcement and from preparing for chametz burnings to instructions to airport police on how to inspect matzah.

Yanky Meyer, founder of the Misaskim disaster response organization, who organized the event along with Shomrim, said he invited every agency that could conceivably have and impact on Pesach preparations. This includes such disparate federal agencies such as the FBI and U.S. Customs and Border Protection to local agencies such as the Administration for Children’s Services, the district attorney’s office and the MTA.

Rabbi Meyer, who chaired the event which was held in Maimonides Medical Center, distributed a calendar for the month of April, in which icons highlited various dates apprising law enforcement and emergency response agencies of what to be aware on any given day.

For example, “beginning two weeks before Pesach stores will want to ensure that no chametz touches their kosher for Pesach aisles so they will be putting a container out on the street,” Rabbi Meyer said.

“Some of them take up only two or three parking spaces,” Rabbi Meyer said, “but some take up four or five spaces.”

Police may want to order them removed, but agreed to allow them to stay, since it’s only for two weeks and is necessary for the holiday atmosphere.

The two weeks before Pesach are Boro Park’s biggest shopping season, often stretching into the wee hours of the morning. Everything from cases of eggs and potatoes to yards-long rolls of plastic cardboard are sold.

Then there are the yeshivah schedules. As Pesach draws closer, more children will be on the street. The NYPD’s Hate Crimes Task Force will be more attuned during those days and police will be conducting more shul patrols.

“It worked great last year and will work even better since I have a more seasoned staff this year,” said Powers, who oversees the entire southern Brooklyn.

Capt. Kenneth Quick, commanding officer of Boro Park’s 66th precinct, told attendees of a novel method of spreading patrols over as wide an area as possible. Working with community groups and city agencies, the police have identified the schedule of every major shul and yeshivah. Patrols will be posted there during heavily trafficked times.

Rabbi Meyer said that due to cooperation with Brooklyn Deputy Assistant Fire Chief Wayne Cartwright, the number of burn victims in the community over the Pesach season has gone down from 26 to zero. But he told representatives from the Administration for Children’s Services about the holiday schedule in case a hospital reports a child with a burn and nobody is home when they go down to check it out.

A box of matzah was passed around to the 100 or so participants, but chiefly for the U.S. Customs agents who would be checking it at regional airports.

Rabbi Meyer explained how matzah is made mostly by hand and fliers are likely to hold it with them on the plane rather than store it with the luggage.

“If an agent sees it and wants to check it — he just ate a sandwich and touches the matzah, all the money paid is gone with the wind,” Rabbi Meyer said. “You can’t use the matzah anymore.”

Agents, he suggested, should notify passengers that they were aware of the sensitivity with their matzah and would be careful with it.

Port Authority, MTA and Highway Patrol police were informed which day to expect heavier than usual traffic, along with what to do when someone is stranded on the road after Yom Tov comes in.

Rabbi Berish Freilich, a longtime askan, concluded the conference by noting that “we are all the children of Holocaust survivors.”

“The only way we can go on in New York City,” Rabbi Freilich said, “is because of the great law enforcement that allows us to practice our religion without fear.”