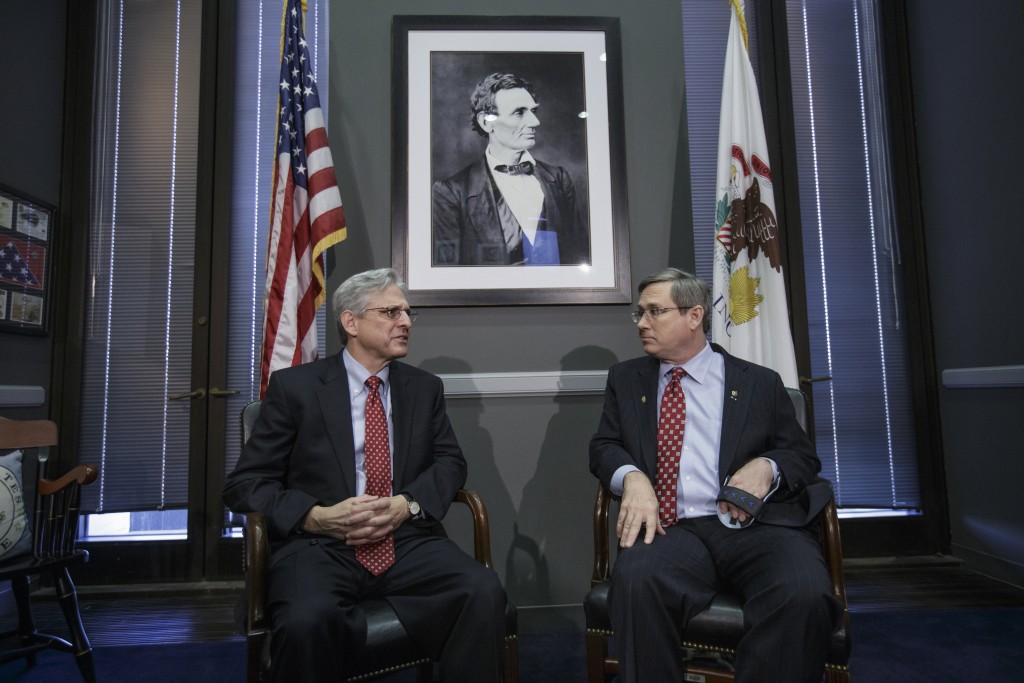 Illinois Sen. Mark Kirk became the first Republican to meet with President Barack Obama’s pick for the Supreme Court on Tuesday, and had strong words for fellow GOP senators who are blocking the nomination until a new president is in the White House.

Kirk chatted for about 25 minutes in his Capitol Hill office with Merrick Garland, the 63-year-old chief judge of the U.S. Court of Appeals for the District of Columbia Circuit.

“I think we should be doing our job,” Kirk said, noting that Garland is “one of the most eminent jurists in the country,” as the two sat beneath wall portraits of Abraham Lincoln and conservative former British Prime Minister Margaret Thatcher.

“We need for a rational, adult, open-minded consideration of the constitutional process,” Kirk said. “When you just say, ‘I’m not going to meet with him’ … that’s too closed-minded.”

Republican senators have largely adhered to the strategy engineered by Senate Majority Leader Mitch McConnell, R-Ky., of denying Obama another justice on the court, even though signs of political discomfort are beginning to show as the confirmation battle drags on.

Protesters have been badgering Republican senators who are up for re-election this fall, staking out their home-state offices and town hall meetings during the spring recess. Many are echoing activists’ simple refrain: Do your job.

At the same time, conservative groups, including Tea Party Patriots, are shoring up the GOP senators, including Sen. Charles E. Grassley of Iowa, the chairman of the Judiciary Committee, encouraging them to continue the blockade. Other conservative organizations are challenging red state Democratic senators to join the Republicans.

Polling shows that while conservative voters back McConnell’s strategy, most Americans believe the Senate should at least hold hearings to consider the president’s nominee, who is considered a moderate justice by many measures. The Senate could then vote to confirm or deny Obama’s pick.

For Kirk and other Republican senators facing tough re-elections this fall, including Sen. Kelly Ayotte in New Hampshire and Sen. Pat Toomey in Pennsylvania, they’ll need to win over a broader swath of the voters than just the most conservative ones in their states.

Kirk earlier encouraged his colleagues to “man up” and vote, but so far only two other Republican senators have said a vote should be taken.

“Instead of going through the motions, Sen. Kirk should show leadership by putting pressure on McConnell and urge him to give an eminently qualified Illinois native a fair hearing followed by an up-or-down vote.”

A shift among Republican senators is clearly underway, but there does not yet appear to be enough momentum to push GOP leadership to back off the blockade and allow a vote before a new president is elected.

As many as 16 Republican senators have now said they would be willing to meet with Garland — many more than when he was first nominated to replace Justice Antonin Scalia, a conservative icon who died suddenly last month.

Many senators, though, said the visit would only be a courtesy, and that they preferred to leave the vacancy open until after a new president is in office in January 2017.

Kirk heaped praise on Garland, even though he stopped short of saying he would vote for him. He suggested, though, that the senators’ meetings “shouldn’t be just for nothing.”

“We should have a long discussion about key issues,” Kirk said, adding his own interest in testing the limits of federal racketeering statutes to “attack the big drug gangs of Chicago,” after more than 30 shootings over last weekend.

The vacancy could leave the court ideologically split, 4-4, for the remainder of this term and into the court’s next one, affecting decisions on key pending cases, including Obama’s immigration actions.