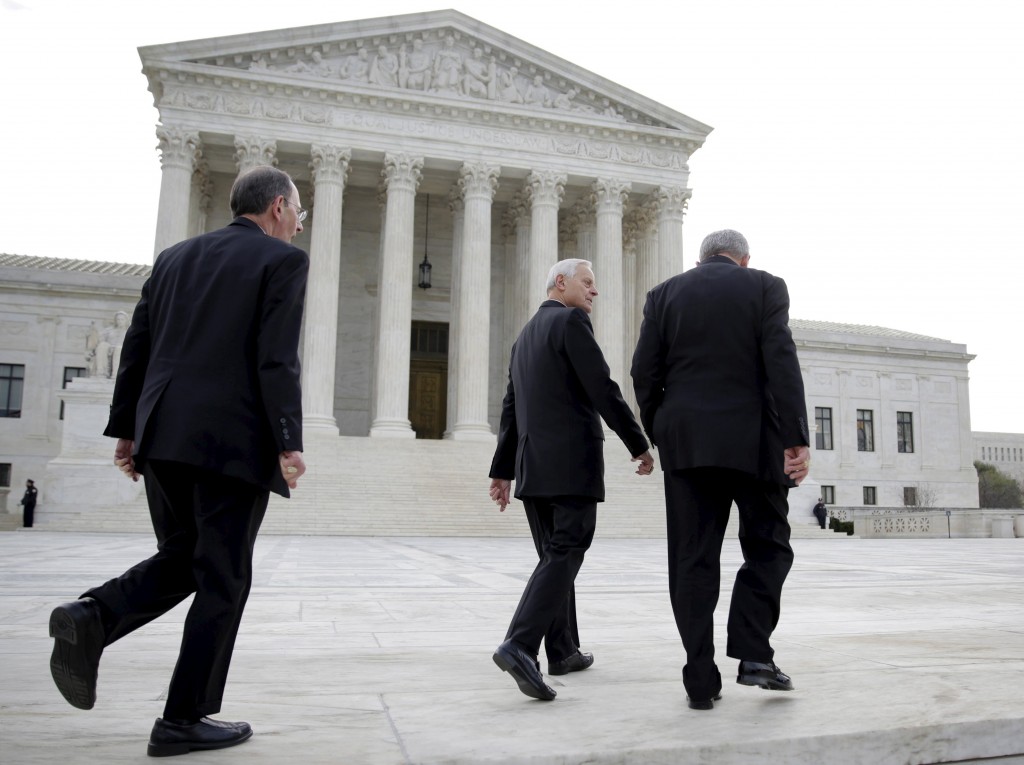 The Supreme Court appeared deeply divided in a case touted by advocates for the Orthodox community as one with particularly high stakes that could set a far-reaching precedent regarding the role of courts in evaluating religious practice. The legal battle is the latest challenge to the Affordable Care Act, whose protocols, defendants argue, force them to be a party to the delivery of medical services that violate their beliefs.

Chief Justice John Roberts and Justices Samuel Alito and Anthony Kennedy voiced sympathy for the group’s claim that under the government’s plan they remain complicit in providing morally objectionable services. “Hijacking. It seems to me that’s an accurate description of what the government wants to do,” Roberts said. Kennedy also used the same term during 90 minutes of crisp arguments and frequent interruptions by the justices. Justice Clarence Thomas did not ask any questions, but his past votes on the issue have supported claims of religious objectors against the health-care mandate.

Justice Sonia Sotomayor said the administration’s arrangement takes into account “a real need” for many who are assisted by the present requirements. Justices Ruth Bader Ginsburg, Stephen Breyer and Elena Kagan also asked questions that signaled their support for the administration’s position.

“It went as well as can be expected,” said Howard Slugh, who prepared an amicus brief in favor of one of the defendants and attended the proceedings, confirming that liberal judges sounded generally critical of the defendants’ case, while conservative judges appeared sympathetic.

He said that Justice Kennedy, who has voted in favor of religious objectors in similar cases, had questioned the solicitor general as to why the government insists on arguing that there is no issue of “substantial burden” if the defendants feel that they would be committing a “sin” through compliance. Slugh said the solicitor general did not answer directly, and went on to argue why the government should prevail on a separate point.

He said one outstanding moment in the arguments came as Justice Sotomayor cut off Chief Justice Roberts in the midst of his questioning of the solicitor general and said the suggestion he was making was “false.” “It was fireworks,” said Slugh.

Following the death of Justice Antonin Scalia, who most observers expected to side with the defendants, the outcome of the case seems far from certain. A split ruling would leave the issue unresolved, and different rules would continue to apply in different parts of the country.

In the fallout of the landmark Hobby Lobby ruling, which allowed certain small businesses whose owners held objections to compliance with the health-care mandate to remain exempt, the administration made an accommodation for religious objectors to provide the services in question through a third party. However, several Christian organizations have refused to comply, arguing that the arrangement still forces them to compromise their religious beliefs.

A key point of the administration’s case is its position that the option does not make the groups a party to the delivery of services, as eight lower courts have maintained. This approach in particular has alarmed many advocates of religious liberty.

“If church-state separation means anything, it surely ought to mean that it is the affected individual, not the government, who has the right to decide whether a law violates his religion,” said Rabbi Chaim Dovid Zwiebel, executive vice president of the Agudath Israel of America. “This is one of the most important religious liberty cases to come before the Supreme Court in recent years. The Orthodox Jewish community has a large stake in its outcome.”

Stephanie Barclay of the Becket Fund for Religious Liberty, who is representing the Little Sisters of the Poor, told Hamodia that “the government keeps claiming, inaccurately, that they are offering an opt-out for these groups, but really it’s an opt-in.”

The fact that the health-care mandate has exempted many organizations on grounds of convenience, but refused to do so for reasons of conscience, she said, further proves her client’s case.

“The government knows what a real opt-out looks like, because they have given it to Exxon, Pepsi and the United States military,” said Barclay. “This is not an attack of the Affordable Care Act and would not limit the government, which has many ways to fulfill its compelling interest without making a group of nuns a party to it.”

Houses of worship and other religious institutions whose primary purpose is to spread faith are entirely exempt from the mandate. However, the administration maintains that the defendants, Bishop David Zubik, head of the Catholic Diocese in Pittsburgh; the Little Sisters of the Poor, nuns who run more than two dozen nursing homes for impoverished seniors; a number of Christian colleges; and Priests for Life, an advocacy group, perform functions identified as too “secular” to be covered by the exception. Most lower courts have upheld this stance — that despite religious affiliation, the groups’ main purpose remains education, care for the poor, or other non-religious services.

A brief from the National Jewish Commission on Law and Public Affairs (COLPA) on behalf of a number of major organizations, including Agudath Israel of America, the Orthodox Union and Torah Umesorah, authored by noted attorney Nathan Lewin, raised concern over the distinction, saying that the mold created by the government runs contrary to Jewish religious beliefs. Relying on extensive quotes from Talmudic and halachic sources, it uses the model of the higher level of holiness assigned to a beis medrash as opposed to a shul to demonstrate this issue. With this hypothetical prototype, the brief attempts to demonstrate how the government’s distinction would lead it to an inaccurate and potentially harmful conclusion about the Jewish faith.

An amicus brief submitted by Rabbi Mitchell Rocklin, Rabbi Steven Pruzansky and Rabbi Dov Fischer argued that the determination of courts that the mandate sufficiently accommodates religious groups, despite their objection to the contrary, poses a threat, specifically to minority groups with whose practices judges are unlikely to be familiar.

“If the Obama administration prevails in this case, Jews will be required to convince judges of the importance of particular mitzvos before they can even request a religious exemption,” said Mr. Slugh, who authored the brief on behalf of the three Rabbis. “Such a requirement would invite judges to second-guess Jews’ interpretation of Judaism and deny them reasonable accommodations for theological — rather than legal — reasons. Judges are not qualified to answer halachic questions and should be required to interpret American law rather than the Torah.”

In recent weeks, two articles — one written by Mr. Slugh and Rabbi Rocklin, which appeared in National Review, and a Washington Post op-ed authored by Nathan Diament of the Orthodox Union — pointed to the high court’s denial of a hearing in the case of Ben-Levi v. Brown as a further sign of the dangers of leaving religious determinations to the discretion of judges. Ben-Levi, an inmate in South Carolina, was denied the right to hold a study group by prison officials who claimed that his religious beliefs were not violated due to their mistaken understanding that such a gathering requires a minyan or a Rabbi to be present. In a rare move, Justice Alito wrote a dissent to the court’s denial of certiorari in the case.

“Repeatedly and in many different contexts, we have warned that courts must not presume to determine the place of a particular belief in a religion or the plausibility of a religious claim,” wrote Justice Alito. “The Court’s indifference to this discriminatory infringement of religious liberty is disappointing.”

Both articles posit that the administration’s position regarding the claim of Bishop Zubik, the Little Sisters and other co-defendants is yet another example of the dangers of judges’ evaluation of religious practice.

A decision is expected by June. However, in the event of a 4–4 vote, it is also possible that the Justices will decide to hear the case again once the court’s vacant seat is filled.

With reporting from Associated Press.