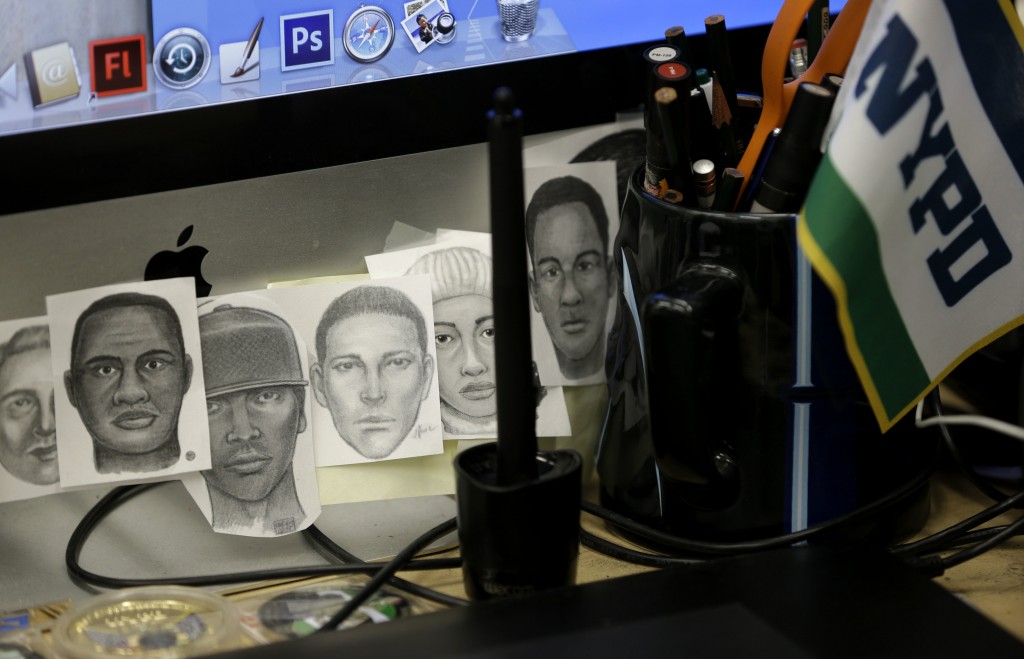 In an age of ubiquitous cellphones and surveillance cameras, New York City police forensic artist Matthew Klein is one of a dying breed of crime fighters who helps catch bad guys with a pencil and paper.

He is one of only about 100 full-time forensic artists in the United States, plying a throwback trade that relies on the skill of getting often-traumatized people to open up and talk about a horrific crime.

“It’s all about the witness,” Klein said. “You have to be able to communicate with them. I try to put them at ease, give them sympathy, and then we get to work.”

Just this month, Klein was called in on the case of a woman in Brooklyn slashed on the neck by a man with a kitchen knife. There was no surveillance video, no one shot cellphone photos of the fleeing suspect and the victim never saw her attacker. But one witness got a good look.

Klein, 35, spent several hours with the witness, showing dozens of different eyes, different face types and hair, revising until they settled on an image that was plastered, literally and virtually, around the city.

Officers found possible fingerprints, and the mug shot that matched was eerily similar to the sketch, said Robert Boyce, the NYPD’s chief of detectives.

“Bam! We knew we had the guy, after starting off with nothing,” Boyce said.

An arrest was made about a week later. The suspect, Gregory Arnold, was charged with attempted murder and is in custody. His lawyer didn’t return a call seeking comment. The victim is expected to recover.

Law-enforcement officials said the work remains valuable because surveillance cameras and bystander cellphones can’t be everywhere, and because crimes that are caught on video don’t always capture the suspect’s face.

In many cases, the NYPD’s three-person team of forensic artists uses such surveillance footage, along with witness descriptions, to create more detailed sketches. They are responsible for hundreds of sketches, facial reconstructions of the dead and other crime-related drawings each year.

“These are old tools that you never walk away from,” Boyce said of forensic art. “The cameras are not probative. We use witnesses and take the sketch to the street. It advances the investigation.”

Philadelphia’s police department used to do 150 sketches a year but now is down to about 10, and the two officers spend most of their time on other work. The Chicago Police Department hasn’t had a staff sketch artist since 1993. Houston is down to one. Many other departments rely on part-time contractors, mostly because of budget constraints and the proliferation of surveillance and cellphone cameras, and computer programs that allow officers to create sketches using pre-loaded facial elements.

Suzanne Birdwell, of the International Association for Identification, a forensic work industry group that includes artists, said the fewer numbers make for more work because of the unique value. A civilian, she works full-time as a forensic artist with the Texas state police, under the Texas Rangers. She and a colleague are tasked with creating forensic art for any law enforcement agency statewide that needs help, and there is a yearlong wait list for her services.

“Forensic art is not about creating something beautiful; it’s about documenting an intangible piece of evidence,” she said. “When we start a project, we have no idea what we’re drawing. And we never know it’s right. Imagine drawing something you’ve never seen before.”

An example that sticks with Birdwell is a cold case in which a 4-year-old boy saw his mother killed. He came to her 35 years later, and they worked on a composite sketch of the suspect. The suspect was identified from the drawing within a week, Birdwell said. She drew a suspect sketch from a teenage witness who had been kidnapped and assaulted. Even before it went out to the media, an officer recognized the man. The suspect, Leroy Diamond, was found guilty and was sentenced to 20 years.

In Los Angeles, artist Marilyn Droz worked as an independent contractor for law enforcement agencies for more than 30 years, much of it with the Los Angeles police department, and once drew an image of a boy from a skull found in a chimney. It turned out the boy had disappeared decades earlier, and her image helped identify him and give closure to his family.

Klein had no formal art training. His dad was an animator for the Walt Disney Co. and Warner Bros. and taught him to draw. Klein served two tours in Iraq and then became an NYPD patrol officer for 10 years before discovering the unit existed. He took the drawing test and came on last year. His colleague, Detective Jason Harvey, who has had sketches shown as part of a Manhattan art gallery exhibit, is training him.

Pencils are neatly arranged alongside Klein’s computer at his desk at NYPD headquarters, and the board behind him is splashed with practice drawings and doodles and sketches from memorable cases. He drew an image of a woman last year who tried to snatch a child from a playground in Central Park; the likeness was passed around to nannies and mothers in the neighborhood, and an arrest was made.

But not all cases have such a neat resolution. Klein drew a reconstruction of a John Doe who jumped in front of a train, but there has been no identification made.

Klein says he is learning more each day.