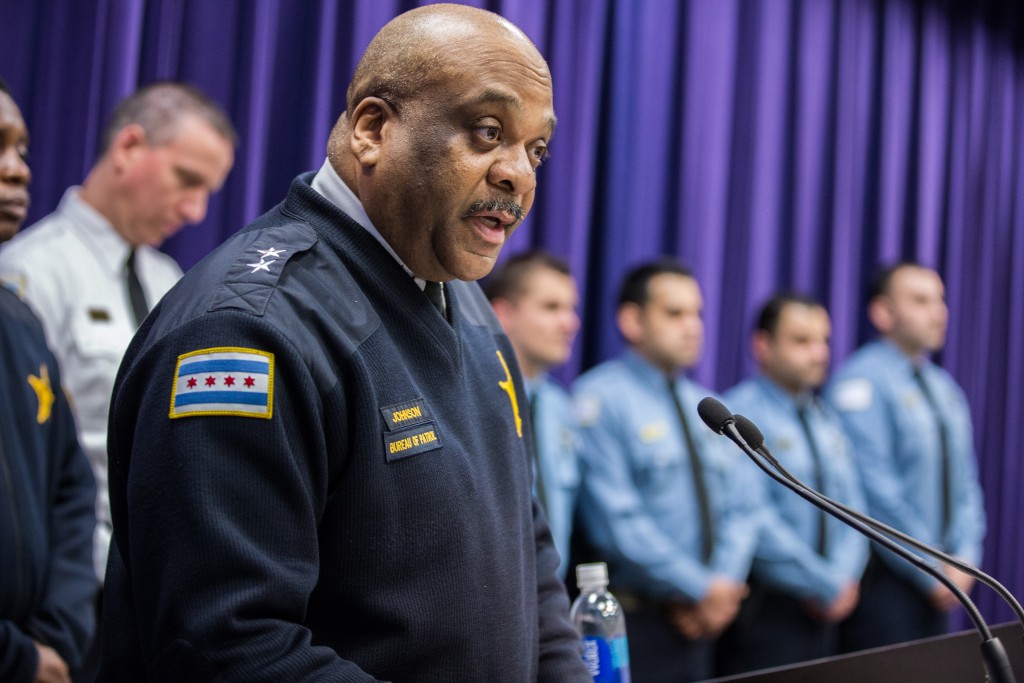 Mayor Rahm Emanuel has rejected three finalists recommended by the Chicago police board for the city’s top police post and selected the force’s current chief of patrol as the new interim superintendent, his office said.

The mayor’s office said in a statement late Sunday that Emanuel was appointing Chicago Chief of Patrol Eddie Johnson as interim superintendent. A formal announcement was set for Monday.

Emanuel is trying to replace Superintendent Garry McCarthy, whose firing was part of a frantic effort to restore trust in the Police Department and his own leadership following the release in November of dash-camera footage showing a white police officer fatally shooting an unarmed black teenager 16 times.

Johnson, who is African-American and a 27-year veteran of the force, was not among the police board’s recommendations. A former commander of the Gresham police district on the South Side, Johnson was promoted to deputy chief of patrol in 2012 and chief of patrol in December.

The statement said Johnson is a Chicago native who grew up in the now-demolished Cabrini Green housing project until he was 9 years old. As chief of patrol, Johnson commanded 8,000 officers, the statement said.

Johnson will take over during a time of immense turmoil marked by protests over police shootings. In one of the more high-profile cases, Officer Jason Van Dyke has been charged with first-degree murder in the 2014 shooting death of 17-year-old Laquan McDonald, which was captured on squad-car video and has prompted investigations, including a federal civil rights probe of the police department.

Alderman Anthony Beale said the mayor’s office reached out with news of Johnson’s selection ahead of the official announcement. Beale said he supported the mayor’s decision.

“Eddie Johnson knows Chicago, he knows the police department and the challenges facing our neighborhoods,” he said. “He is a true leader and will bring the fundamental changes CPD needs right now. I look forward to getting to work with Eddie right away.”

Anabel Abarca, a spokeswoman for Alderman George Cardenas, a prominent member of the Chicago City Council’s Latino caucus, also told The Associated Press that the alderman had been notified of Johnson’s selection in advance. Cardenas and Hispanics on the council had expressed frustration that the police board had passed over current Interim Superintendent John Escalante, who is Hispanic and has been running the department since McCarthy’s firing. Escalante has said he applied for the job. The AP emailed Escalante’s spokesman asking for his comment, but did not get a reply Sunday.

A city ordinance allows Emanuel to appoint an interim chief and ask the police board for a new list of finalists.

“While each of the finalists had strong qualifications, the mayor did not feel that any of them were the complete package that Chicago needs at this time and thus none were offered the position,” Emanuel spokeswoman Kelley Quinn said earlier Sunday. “The mayor called each of them individually late Saturday to let them know of his decision.”

One of the board’s initial nominees, Cedric Alexander, told AP on Sunday that Emanuel offered him the job on Thursday during a meeting in Washington, D.C., and that the mayor told him he intended to make Johnson his first deputy. But he said Emanuel phoned him Saturday night to say he had changed his mind.

“He did offer me the position in D.C. on Thursday, and last night he called and said he’s going in a different direction,” said Alexander, the public safety director in Georgia’s DeKalb County. NBC5 in Chicago first reported that Alexander said he’d been offered the position.

“I would like to thank the Chicago Police Board for giving me the opportunity to apply,” Alexander said. “Clearly the mayor is going in another direction, and I would just like to wish the very best for the people of Chicago.”

The Chicago City Council’s black caucus said last week that they would prefer a local African-American for the job. But they stopped short of endorsing Eugene Williams, a black deputy chief in Chicago who was among the police board recommendations. Anne Kirkpatrick, a white former police chief in Spokane, Washington, also was a finalist.