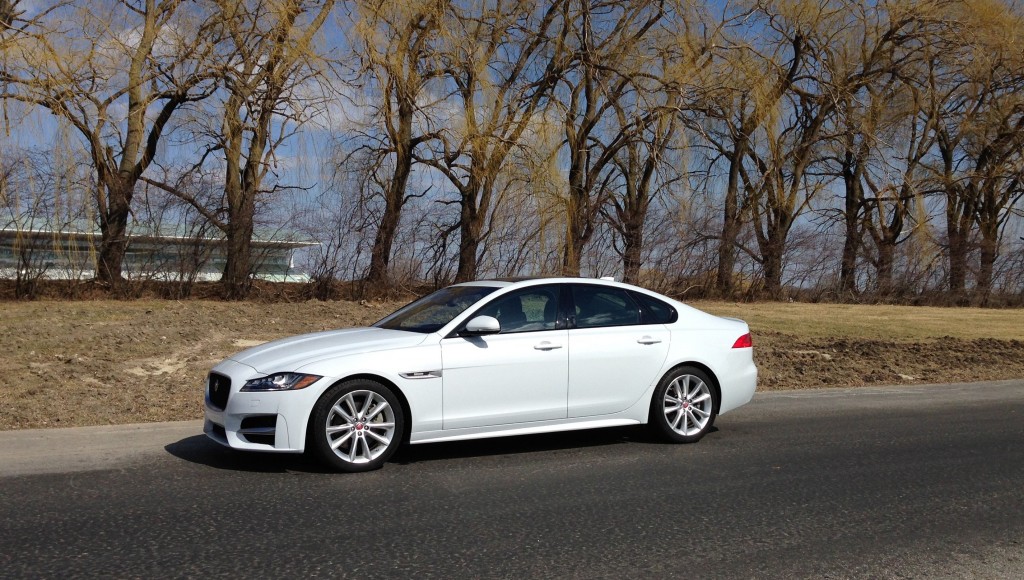 The classic British brand has been rejuvenated under Tata Motors, India’s largest automaker.

For model year 2017, Jaguar is expanding its three-car lineup to five. Bookending the XJ luxury flagship and the beastly F-Type sports coupe are two firsts, the F-Pace crossover and the XE compact sedan.

In the middle is the XF midsize sedan, the most mainstream model that also portends Jaguar’s future.

First launched for model-year 2009, the XF replaced the S-Type and heralded a modernization away from the stately quad headlights and pouncing hood ornament of historic Jaguar into a sportier sedan with coupelike lines.

The fully redesigned 2016 luxury sedan doesn’t look much different from the acclaimed outgoing model. The wheelbase is 2 inches longer, the front overhang is shorter, so it looks a tad sportier, but the long nose with the bulging hood and the sharp coupe lines remain.

Yet Jaguar says every bit of the midsize sport sedan is new, save for a few rivets and fasteners.

It’s the first Jag to get the LED treatment, with hook-shaped daytime running lights that underscore the squinting quad headlights.

Most of the newness comes from the materials. Lightweight aluminum (or aluminium if you prefer the Queen’s English) has been used on the hood, the single-sheet body panels, and fenders to improve aerodynamics and drop the curb weight 132 pounds to 3,770 pounds. The light-weighting in the XF also improves stiffness, so it handles more like a sports car than a luxury sedan. Jaguar says it will apply aluminum light-weighting across its product line.

Behind the wheel, the XF delivers a pleasant balance of creature comforts and insulating quiet with acceleration that is spirited if not powerful, and rear-wheel drive handling that enables the driver to whip it around a bit more than in all-wheel drive.

The direct injection 3.0-liter supercharged V-6 engine mated to an 8-speed automatic transmission makes 340 horsepower and 332 pound-feet of torque. Using the same powertrain as the base model F-Type sports coupe, the supercharged six provides plenty of available power for all road needs.

Despite utilizing a twin-vortex supercharger, there is a delay or lag from a dead stop. Since it’s connected to the crankshaft by a belt, unlike a turbocharger, the delay should be mitigated, but the XF supercharger still needs plenty of high rev spin to force the air into the cylinders to launch. At highway speeds or most other situations, the supercharged engine is super responsive.

The double wishbone suspension, also derived from the F-Type, and the rear-link suspension that will be in the XE, means that the car soaks up road imperfections for a smooth ride, but the stiff handling makes it feel more like a sport compact such as the Audi S3 than a larger sedan. It’s a nice balance.

There were a couple of times where the rear-driven wheels didn’t feel planted enough on a down-sloping on-ramp, for instance, so I lost confidence in aggressive cornering. In less aggressive scenarios, such as in a wet spring snowstorm on the highway, the winter tires gripped enough to keep going at a reasonable speed.

For those drivers that prefer grip to give, the AWD variant is likely the better option.

And for drivers who want greater fuel economy for just about the same torque, wait for the four-cylinder diesel engine and its estimated 40 mpg highway set to arrive this summer.

The test model still returned a nice 26.5 mpg at 60 mph on the highway.

The inside fits four adults comfortably but the limited forward visibility takes some getting used to. The long, raked windshield and thick A-pillars made for a narrow window to see the road and what surrounds, but that is common in coupelike sedans such as the Cadillac CTS.

The interior is gorgeous and simpler than its German competitors. Red leather seats of the tester meshed beautifully with the red stitching of the soft-touch black materials everywhere else, including the suede cloth pillars and the headliner (part of the Luxury Upgrade Pack for $2,700). The band of wood wrapping around the front of the dashboard in what Jaguar calls its Riva Hoop connects the wood-inlaid doors and is one of my favorite interior features of any car.

Neat little luxury features abound, like the ignition button that pulses red like a heartbeat, the telescoping gear selector that emerges from the flat square of wood on the center console, and a center stack that is spartan but simple to use, unlike its German and Cadillac competitors. The tester came with the standard touch screen, which splits into four quadrants and feels more like an outdated version of Ford Sync than anything from the competitors. Without testing the all-new 10.2-inch touch screen, we can strongly recommend it for an extra $3,100; the current one is the lone dud in an otherwise refined and elegant cabin, which may be more influential than what’s under the hood.

The XF is not the most powerful luxury car in this class, but it stands out with simple, subtle elegance.

Parting shot: Not the most powerful, but the most distinctive and elegant.