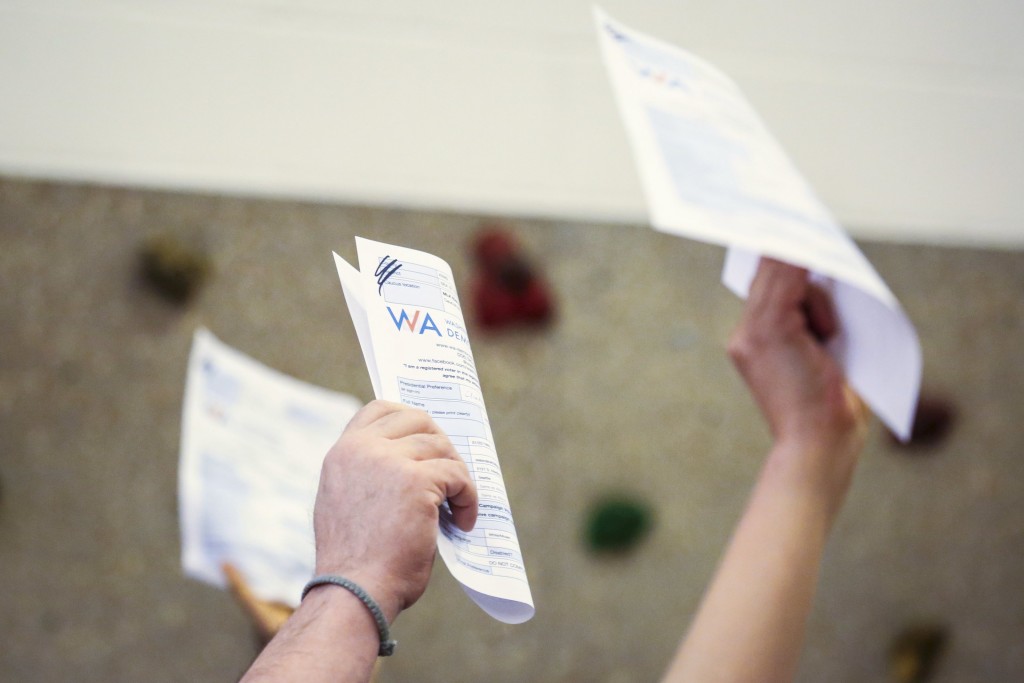 Sanders hopes the weekend votes will give him a boost in his efforts to make a comeback against front-runner Clinton.

Sanders was aiming for a sweep of three Western states – Hawaii is also holding a primary Saturday – that would generate more momentum in his bid to overtake Clinton and help stave off calls from Democratic leaders that he should wrap up his bid in the name of party unity.

Clinton, the former secretary of state, has increasingly turned her attention toward a potential Nov. 8 general election showdown against Republican front-runner Donald Trump, claiming she is on the path to wrapping up the nomination.

Heading into Saturday’s voting, she led Sanders by about 300 pledged delegates in the race for the 2,382 delegates needed to win the nomination at July’s convention. Adding in the support of superdelegates – party leaders who are free to back any candidate – she has 1,690 delegates to 946 for Sanders.

Sanders needs to win up to two-thirds of the remaining delegates to catch Clinton, who will keep piling up delegates even when she loses under a Democratic Party system that awards delegates proportionally in all states.

But Sanders has repeatedly said he is staying in the race until the convention, pointing to the big crowds at his rallies and his impressive fundraising figures as proof of his viability.

While Sanders faces a steep climb to the nomination, a string of losses for Clinton would highlight persistent vulnerabilities within her own party. Sanders continues to attract tens of thousands to his rallies – drawing more than 17,000 in Seattle this week – and has collected more than $140 million from 2 million donors.

“I have gotten 2.6 million more votes than Bernie Sanders,” Clinton told supporters crowded into a union hall in Everett, Washington, this week. “We are on the path to the nomination, and I want Washington to be part of how we get there.”

Sanders implored thousands of supporters in Spokane to come see him speak again – at a caucus. “Get there early,” he said. “Let’s have a record-breaking turnout.”

On Tuesday, Sanders won caucuses in Utah and Idaho, but lost Arizona – the largest delegate prize – to Clinton. Because Democrats allocate their delegates on a proportional basis, meaning that the popular vote loser can still pick up a share, those victories netted Sanders a gain of about 20 delegates.

He hopes to avoid a repeat of that performance by pulling out a win in Washington, which awards more than double the number of delegates than Hawaii and Alaska combined. He’s also looking to contests that follow in Wisconsin on April 5 and Wyoming on April 9 as a way to build momentum.

Most of his dozen primary-season wins have been in states with largely white populations and in caucus contests, which tend to attract the most active liberal Democrats. He’s heavily favored by younger voters, who were a key part of the coalition that boosted Obama to victory twice.

Sanders dispatched his wife, Jane, to Alaska and Hawaii. Clinton, who held a conference call with supporters in Hawaii, did not send any high-profile supporters to campaign on her behalf.

Clinton has been looking past the primary contests and aiming at potential Republican challengers. In interviews, rallies and speeches this week, she largely focused on Tuesday’s terror attacks in Brussels, casting GOP front-runner Donald Trump and Texas Senator Ted Cruz as unqualified to deal with complicated international threats.

Her campaign sees the April 19 contest in New York as an important one, not just because of the rich delegate prize but because losing to Sanders in a state she represented in the Senate would be a psychological blow. She hopes to lock up an even larger share of delegates in five Northeastern contests a week later.