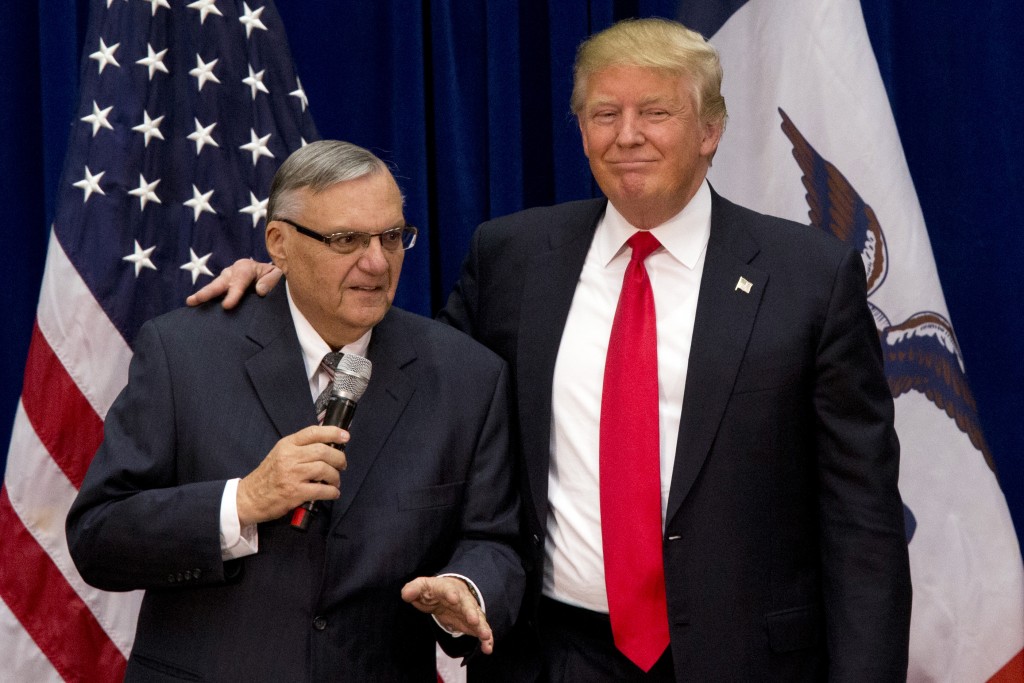 The presidential race is reopening old wounds among Arizona Republicans who clashed over the tough immigration law six years ago that sparked protests and boycotts and ended up costing the state an estimated $100 million in revenue.

While campaigning across Arizona over the weekend, businessman Donald Trump and Texas Sen. Ted Cruz led the charge for deporting more than 11 million undocumented immigrants, and the billionaire front-runner drew cheers for his proposal to build a wall along the U.S.-Mexico border.

For many in Arizona’s Republican business community, the rhetoric is an unwelcome return to the state’s own 2010 feud over a law requiring police to check the citizenship of those they suspected of being in the country illegally. Stung by the loss of conventions, tourists and contracts worth at least $100 million that resulted from a nationwide boycott in response to the law’s passage, more than 40 business leaders urged Arizona Republicans to back off the immigration issue in 2011.

“I want people to know that we here in Arizona are for legal immigration,” said Tucson car dealer Jim Click, a Republican donor who signed the 2011 letter to legislative leaders. “These people are running for president. They know we’re not going to deport 10 million illegal immigrants.”

While the Supreme Court overturned much of SB 1070, Arizona’s controversial law, in 2012, saying immigration was a federal matter, the debate over immigration remains. Arizona, the 14th most populous state, has about 300,000 undocumented immigrants, the ninth-largest population in the country, according to the Pew Hispanic Center in a November 2014 report.

Immigrants play an important role in Arizona’s economy, said Glenn Hamer, president of the state Chamber of Commerce and Industry. He said Arizona businesses, particularly construction firms, are counting on the next president to lead on devising a pathway to legal status for those undocumented immigrants currently in the country. Yet the current rhetoric from the Republican presidential candidates isn’t encouraging.

“We desperately need to work out the immigration issues at the federal level,” Hamer said. “This campaign probably makes it harder, but let’s see what happens.”

The presidential race is bringing out “echoes and shadows” of Arizona’s old controversies, said Joseph Garcia, executive director of Morrison Institute’s Latino Public Policy Center at Arizona State University. “It’s not who we are anymore.” He said the debate isn’t even rooted in reality, since more people have emigrated south to Mexico than to the United States since 2007.

As they battle for votes ahead of Tuesday’s Arizona primary, Trump and Cruz routinely describe undocumented immigrants as both a national security and economic problem.

“My number-one priority is protecting hardworking taxpayers, protecting American citizens, and when you have a policy that allows 12 million people to come to this country illegally, it takes away jobs from millions of Americans and it drives down wages for everyone,” Cruz said in response to a question in Peoria, Arizona, Sunday.

Trump campaigned near Phoenix Saturday with former Arizona Gov. Jan Brewer, who signed the 2010 law, and Maricopa County Sheriff Joe Arpaio, one of its most vocal backers. Thousands cheered as Trump said the United States has a “big, big problem” with illegal immigration and vowed to build a border wall. Colleen Hamel, a 59-year-old Fountain Hills environmental engineer, wore a T-shirt with an illustration of Trump in front of a wall.

Hamel said Republican elites trot out the immigration issue to get votes and ignore it after they’re elected. Only Trump, she said, is serious about doing something.

“If you’re here illegally, you need to go,” Hamel said.

Ohio Gov. John Kasich, who is not campaigning in Arizona in his presidential bid, has advocated for a path to legal status for nonviolent undocumented immigrants who pay a fine and back taxes. In a presidential debate in February, he said deporting more than 11 million illegal immigrants “is not going to happen.”

Undocumented immigrants work disproportionately in agriculture, construction and service jobs, according to the Pew Hispanic Center, and account for more than 5 percent of the U.S. labor force. In Arizona, undocumented laborers helped build homes and infrastructure during the boom years of the early 2000s, said James Kuliesh, executive director of the Tucson-based Alliance of Construction Trades. The downturn since then has led to many immigrants being out of work, said Kuliesh, who added that many of his members support Trump.

The liberal Center for American Progress said in 2010 that the boycott had cost the state economy as much as $141 million in lost revenue, including $45 million in the lodging industry. In their 2011 letter, Click and other business leaders acknowledged that the boycott had cost Arizona tourists, contracts and conventions, though they did not estimate the dollar value.

C.A. Howlett, a partner at a Scottsdale private-equity firm and former state co-chairman for Jeb Bush, said Trump and Cruz’s positions on immigration are so problematic that he can’t back either in the primary. Instead, Howlett said he’s focused on re-electing Sen. John McCain, whose own views on immigration have drawn a challenge from the right. McCain, in a statement from spokeswoman Lorna Romero, said the current “rhetoric of a few candidates” doesn’t reflect the Republican Party.

Howlett, 72, said he’d back the Republican nominee but decried how immigration was being used as a “wedge issue” in Arizona and the national campaign.

“I do believe that Arizona is still living up to some of its reputation from nearly a decade ago when we had some legislation passed here that was harsh on immigrants and the Hispanic community,” Howlett said. “Whoever is elected, I believe, will have to be realistic after taking office.”

Still, immigration isn’t a make-or-break issue for some Arizona Republicans who disagree with Trump and Cruz’s positions. Ed Robson, a builder of resort communities who has donated more than $600,000 to Republican causes and candidates including McCain, Rubio, and George W. and Jeb Bush, said he’s now standing with the New York billionaire. Like Click, Robson, 85, has hosted George H.W. Bush in his Arizona home.

Though Robson differs with Trump on immigration — the homebuilder favors a path to legal status over mass deportations — he said he trusts Trump on issues of national security and the economy.

“I like Trump’s message,” Robson said. “As far as I’m concerned, Washington is broken.”

Mark Niquette contributed to this article.