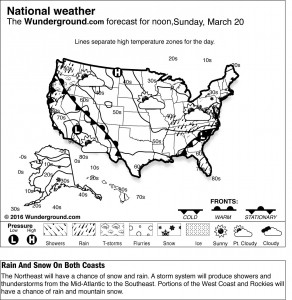 Forecasters are now predicting more snow for parts of southern New England and some mid-Atlantic cities, as a weekend storm bears down on the Northeast on the first day of spring.

The National Weather Service says southeastern Massachusetts, including Boston, and Rhode Island could get 5 to 10 inches of snow Sunday evening through Monday morning. The higher amounts will most likely be southeast of Boston and Providence.

Four to eight inches are predicted for eastern Long Island and southeastern Connecticut.

Philadelphia and New York City could get 1 to 3 inches.

Forecasters in northern New England say accumulation could be as much as 7 to 12 inches along some parts of the northern coast of Maine.

The snow follows a relatively tame winter in the Northeast.